John Duke of Roxburghe, remarkable for the magnificent collection of books which wealth and taste enabled him to form, and to whom a venerative reference is made in the name of the Roxburghe Club, died at the age of sixty-four. His Grace’s library in St James’s Square comprised upwards of ten thousand distinct articles, the richest department being early English literature It cost its noble collector forty years, but probably a moderate sum of money, in comparison with what was realized by it when, after his death, it was brought to the hammer. On that occasion, a single book – Boccaccio’s Decamerone, printed at Venice in 1471 – was sold at £2,260, the highest price known to have ever been given for a book. Dr Dibdin’s account of the sale, or as he chooses to call it, the flight, which took place in May 1812, is in an exaggerative style, and extremely amusing.

The wild and sequestered district of Assynt, in Sutherlandshire, was, in the spring of 1830, the scene of a murder, remarkable on account of the allegation of one of the witnesses at the subsequent trial, that he had been prompted to a knowledge of some of the circumstances in a dream.

Murdoch Grant, an itinerant pedler, had attended a rustic wedding and merry-making at the hamlet of Assynt on the 19th of March in the above year, and for some time after he was not heard of. When four weeks had elapsed, a farm servant passing a lonely mountain lake, called Loch-tor-na-eigin, observed a dead body in the water, and, on this being dragged ashore, the features of the missing pedler were recognised. From the marks of violence about the head, and the fact of the pockets being empty and turned inside out, no doubt was entertained that the unfortunate man had met his death by foul means. But for some time all the efforts of the authorities to discover the perpetrator of the deed proved vain. The sheriff, Mr Lumsden, was much assisted in his investigations by a young man named Hugh Macleod, who had recently attempted to set up a school, but was now living idly with his parents.

One day, Mr Lumsden calling at the post-office of the district, it chanced to be mentioned by the postmaster, that, soon after the murder, he had changed a ten-pound note for a man whom he did not expect to find so rich, namely Hugh Macleod. Mr Lumsden afterwards asked Macleod how he came to have so large a note, and finding the latter deny the fact, his suspicions were so much excited that he deemed it justifiable to have the young man arrested. On his house being searched, none of the pedler’s property was found in it, and, after a while, there seemed so little probability in the suspicion, that the young man was on the point of being liberated. At that juncture, however, a remarkable event took place.

A tailor named Kenneth Fraser came voluntarily forward with an averment that he had had a dream in which some particulars of the murder were revealed. In his sleep the image of the Macleod’s cottage was presented to him, and a voice said to him in Gaelic, ‘The merchant’s pack is lying in a cairn of stones, in a hole near their house.’ The authorities went with him to the house in question, and there, certainly, under a pile of stones, lay some articles which had belonged to Grant. When accident afterwards discovered that Macleod was in possession of a pair of stockings which had belonged to the unfortunate pedler, there was no longer any hesitation felt in bringing him before a Court of Justice. He was tried by Lord Moncreiff, at the Circuit Court in Inverness, September 27th, when Kenneth Fraser gave the evidence regarding his dream with the greatest firmness and consistency. Macleod was found guilty, condemned, and executed, ultimately confessing that he had been the murderer of the pedler.1

It has not been stated to what extent Fraser’s evidence weighed with the jury in the making up of their verdict. In so sceptical an age as ours, one would suppose that his tale of the dream would tend to invalidate the force of his evidence; but we must remember that the trial took place at Inverness. The supposition indulged in by ordinary people was, that Fraser, in the course of his carousings with Macleod, had got a glimpse of the terrible secret, and only affected to put it in the form of a dream, though how he should have thought such a falsehood advantageous when so many were sure to treat it with derision, is difficult to see. The case being so peculiar, we deem it worth while to reprint the report of Fraser’s depositions from the Inverness Courier (Sept. 28, 1830). 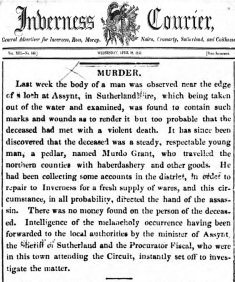 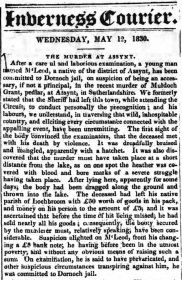 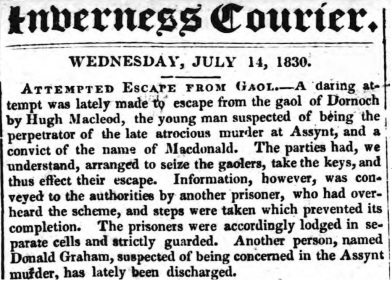 ‘Kenneth Fraser, “the dreamer,” was in the employ of John Macleod, tailor in Clachtoll, in the spring of 1830. Had some drink with the prisoner on the 5th April, and saw him have £1 11s. 0d. in money, and a red pocket-book; prisoner said he got the money from Lochbroom, where he was a schoolmaster, but told witness to say nothing about it. They went about drinking together for a day or two, prisoner paying all. Witness was at the Loch searching for the pack this year. It was in April when a messenger came for him to search for it. It had been said that witness had seen in a dream where the pack was lying. He said so himself at Hugh Graham’s in Lynnmore, and it was true. “I was at home when I had the dream in the month of February.2 It was said to me in my sleep, by a voice like a man’s, that the pack was lying in such a place. I got sight of the place just as if I had been awake; I never saw the place before. The voice said in Gaelic, ‘The pack of the merchant is lying in a cairn of stones in a hole near their house.’ The voice did not name the Macleods, but he got a sight of the ground fronting the south with the sun shining on it, and a burn running beneath Macleod’s house. I took the officer to the place I had got a sight of. It was on the south-west side of Loch-tor-na-eigin. We found nothing there. We went to search on the south side of the burn. I had not seen this place in my dream. It was not far from the place seen in my dream that the things were found. There were five silk handkerchiefs lying in a hole.” The witness, having recounted this marvellous occurrence, said he saw the prisoner in about a fortnight after the 6th April, at church. Did not go with prisoner, who went home. Never heard Macleod’s voice after that time. Witness was at Dornoch when Macleod was in jail, but no message was sent to him from the prisoner. Witness saw Murdoch Grant at the wedding of Betty Fraser. Never was told the articles were put in the hole, and knew nothing of them but from the dream.’

1  Newspapers of the day. Fraser’s Magazine, December 1856. For a striking account of the conduct of Macleod under sentence, see Quarterly review, September 1851.

2  There is obviously an anachronism here. February is, probably, a mistake for April.

On the 19th of March [1567,] as we learn from Birrel’s Diary, the Prince was conveyed out of Edinburgh to Stirling castle; and delivered in trust, to the Earl of Mar, till he should come to the age of seventeen years:

To save recurring to the subject I may mention here that the same close relations with France were the cause of the introduction into Glasgow of great quantities of inferior French coin. The expression that something useless is “not worth a doyt” is still in use among us. The doyt was a French copper coin of the value of the twelfth part of a penny sterling, and under date 19th March, 1660, there is an entry in the burgh records bearing “that the toune and country is lyke to be abused be the frequent inbringing and passing of French doyts,” and strictly prohibiting the introduction “of all sort of such bais capper coyne.” Anorth French coin with which the town council had also to deal because of its large circulation in Glasgow was “dinnaries,” as they are called in the minute. This was the French denier, the tenth part of a sous.

Mar. 19 [1695.] – The degree of respect felt by the authorities of this age for the rights of the individual is shown very strikingly in a custom which was now and for a considerable time after largely practised, of compromising with degraded and imputedly criminal persons for banishment to the American plantations. For example, at this date, thirty-two women of evil fame, residing in Edinburgh, were brought before the magistrates as a moral nuisance. We do not know what could have been done to them beyond whipping and hard labour; yet they were fain to agree that, instead of any other punishment, they should be banished to America, and arrangements for that purpose were immediately made.

The company’s original capital of £100,000 has been gradually increased under three additional charters, granted at different times, under the Great Seal. By Queen Victoria, their fourth charter, dated 19th March, 1849, ratifies and confirms all their privileges and rights, and power was given to augment their capital to any sum not exceeding £1,500,000 in all, for banking purposes. The amount of new capital already created under the last charter is £500,000 stock, making the existing capital £1,000,000, and there still remains unexhausted the privilege to create £500,000 more stock whenever it shall appear to be expedient to complete the capital to the full amount conceded in the charter – a success that the early projectors of the first scheme, developed in Tweeddale’s Close, could little have anticipated.