In the beginning of the year 1257, there arose great troubles in Scotland, and often it falls out in the lesser age of kings, for

and with them a great company of their friends and followers, take the King by force out of his bed at Kinross, and led him to Stirling, taking the King’s great seal violently from Mr Robert Stuterville, the Vice Chancellor, the depute of Richard [of Inverkeithing], Bishop of Dunkelden Lord Chancellor of Scotland. This was done after the day of Simon and Jude [28th of October], on the next morning.

In the year 1302, the Governor and Sir John Fraser, with 8000 well-armed valiant men, engaged 30000 English, on Simon and Judes day [28th of October], near Rosslyn, between whom there was a cruel battle fought, wherein the Scots obtained an absolute victory, leaving 12000 of their enemies dead upon the place; the pursuit lasted 16 miles, even almost to Biggar west, in which pursuit many of the English fell likewise. In memory of which battle, Arnold, the chaplain, has left us these rhymes:

The second year of the thirteen hundredth,

In Rosslyn field new grace shone from on high:

English mixed, it was Scottish victory.

In 1365 we find a four years’ truce with England, signed at London… and another for fourteen years, dated at [Edinburgh] Castle 28th October, 1371.

Intelligence was sent of the Queen’s illness to Darnley, who was then at Glasgow; but, he came not to Jedburgh till the 28th of October [1566], and remained with her, but one night. Both Lennox, and his son, had abundant reason, for attending upon the Queen, constantly; as measures had been taken, during her late illness, in case of her demise, which would have excluded them, from the government.

The Earl of Mar was chosen successor to Lennox: But, being thwarted by Morton, the agent of Elizabeth, in his endeavours for peace, died [on 28th] October 1572, some said of poison, some, of a broken heart. Morton now succeeded Mar, as Regent; and ruled this unhappy kingdom, for many a year, with an iron rod, forged by Elizabeth, and exercised by him.

The 28th of October, [1572,] the Regent, the Earl of Mar, departed this life, in whose place the King’s lieutenant, James [Douglas], Earl of Morton, was confirmed in the Regency of the young King and his realm.

[Queen Mary] remembered, keenly, all the miseries, which she had so long endured, in the prisons of Elizabeth; And feeling, with the sensibilities of a mother, the sufferings of her son, her cares, her agitations, and her anguish, were mitigated, only, by her frequent tears, and final resolution, to communicate her wrongs, and her sufferings, to Elizabeth, in a letter, which displayed, at once, her acuteness, and ability, her dignified spirit, and intrepid temperament: She sent it, by Mauvisiere, to the Queen’s Majesty. Mary may have received some consolation, from a letter, which the Duchess of Guise, wrote her, on the 28th of October; acquainting her, that the King of France had sent Mons. de la Motte to England and Scotland: and from another letter, on the 29th of October, [1582,] from the Queen-mother, which expressed her kindness. Mary had now the consolation of seeing, that the French court, seriously interested themselves in her affairs: And their great object was to induce the Scotish King, to receive his mother, as an associate, in his government: But when the French ambassador arrived, in Scotland, he found the King a sort of prisoner, in the hands of Gowry, and his treasonous associates.

This struck me as particularly pretty Celtic cross. The inscription reads:

To this let me add the letter of a labourer, who has a good head and small learning, but knows his own language well.

Sir, – I received your letter of the 24th Saturday last,

There is a good many words in Ossian’s poems that is not common in modern Gaelic. I have Dr. Smith’s Gaelic book, and I got it from a man because that there was so many words in it which he did not know the meaning of, and I understand them.

Them (the poems) that I heard repeated corresponds with those that is in the book.

It would be quite absurd to think that a man would spend his time studying old Gaelic for to translate English prose, and put it in Gaelic verse, and choose the words as they were spoken about seventeen hundred years ago: it would be a very laborious task; and if the publication was printed, the publisher would be a great loser by it, as so few would buy it, because they did not understand it; and none would be able to do it, unless he was a first-class Gaelic scholar, and a good poet; and also he would have to read some other poems, as old as Ossian’s for to find the measure of the metre, as some of them is composed to a measure that is not used in modern poetry. I understand the Gaelic of the published books. I understand the words separately. –

1  It is to be observed that this witness says nothing of the Gaelic Ossian of 1807. 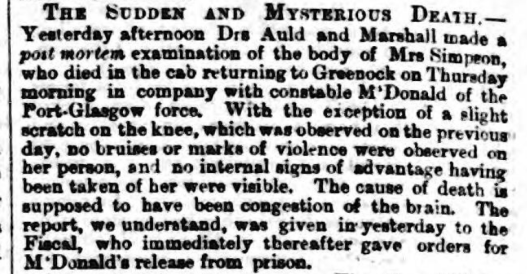 THE SUDDEN AND MYSTERIOUS DEATH. – Yesterday afternoon Drs Auld and Marshall made a post mortem examination of the body of Mrs Simpson, who died in the cab returning to Greenock on Thursday morning in company with constable McDonald of the Port-Glasgow force. With the exception of a slight scratch on the knee, which was observed on the previous day, no bruises or marks of violence were observed on her person, and no internal signs of advantage having been taken of her were visible. The cause of death is supposed to have been congestion of the brain. The report, we understand, was given in yesterday to the Fiscal, who immediately thereafter gave orders for McDonald’s release from prison.

One thought on “28th of October”