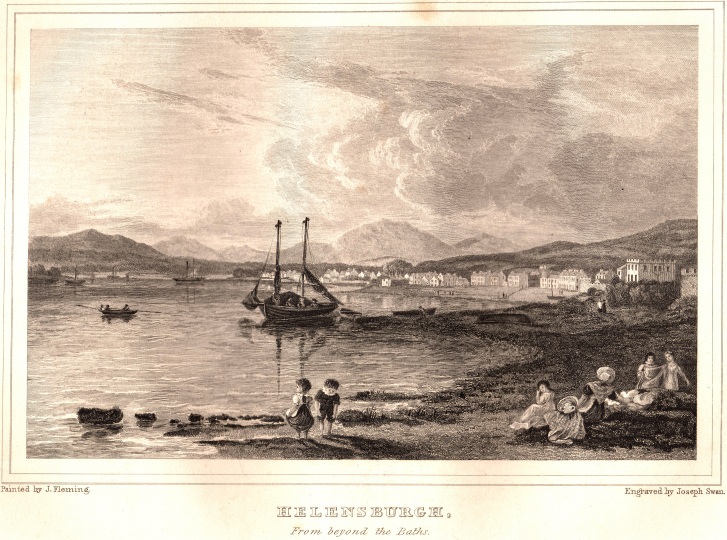 Drag the slow barge, or drive the rapid car.

ON the northern shore of the Clyde, immediately opposite to Greenock, and on the margin of a beautiful and open bay at the entrance to the Gare loch, an arm of the Frith which divides Roseneath from this part of Dumbartonshire, stands the village of Helensburgh. It is distant 23 miles N. W. from Glasgow, and five N. E. from Greenock; and is the first of those numerous watering places which grace the shores of the Clyde, the traveler meets with in his progress down the river. The houses, with very few exceptions, form a line along the beach, presenting their white fronts to the sea, whence they receive the healthful breeze, while they are sheltered from the northern blast by a range of hills which rise immediately behind. They are, in general, neat, and some of them form even commodious dwellings; though certainly they are all better fitted for summer than for winter residences.

This village is but of recent origin. It was founded about the year 1775, by the proprietor Sir James Colquhoun of Luss, who named it after his lady Helen. During the first twenty years it made but little progress; but since 1795 it has increased more rapidly, and has become a favourite and fashionable place of resort for the wealthy inhabitants of Glasgow, Paisley, and their neighbourhoods. Nothing can be pleasanter than the gay and lively appearance it presents during the summer. The neighbouring shores are daily crowded with the young and lovely of the west of Scotland; and the steam boats which visit it almost hourly, though they take portions of the migratory population away, bring renewed accessions of visitors. The walks are not numerous, but they afford a variety of delightful scenery; from the hills behind, the spectator looks down on the one hand upon the Frith of Clyde, its varied and interesting shores; on the other upon Lochlomond, with its numerous islands studding its placid bosom, like spots of clouds upon a summer sky Situated upon the verge of the Highlands, a drive of a few hours, enables the stranger to visit many sublime or picturesque scenes: while the steam boats give constant opportunities of making water excursions with safety and convenience.

Helensburgh was intended to have been built on a regular plan, but this does not seem to have been very strictly attended to. However it has a very graceful appearance, when seen from the water, or from the Quay at Greenock; and only wants a church spire or tower to ornament the distant prospect. The parish church which certainly ought to be here is at the Row [Rhu], a place distant about two miles on the shores of the Gare loch; there is, however, a meeting house for congregational independents which was built some years ago [now Aldonaig House]. A theatre was erected here, many years ago, but it is seldom occupied. The inhabitants of the west of Scotland are not proverbial for their encouragement of this species of amusement even in winter, it is therefore hardly to be expected they would neglect the beauties of nature, and the enjoyment to be found on the shore or on the hills, for the paltry performances at any time here exhibited. The hotel [Baths Inn, now the Queen’s Hotel] is an extensive building, at the east entrance to the village, and the baths are immediately adjoining and connected with it. These latter contain both hot and cold baths, and every necessary convenience; thus supplying a deficiency much complained of at many of the watering places. They were erected by Mr. Henry Bell, now so well known, for the introduction of steam navigation into Europe.

Mr. Bell resides here, and must so long as he lives be an object of interest with every intelligent stranger. Notwithstanding the attempts made to contradict it, we believe it is now very generally admitted that Mr. Bell gave not only the first hint, but also drawings and plans for the machinery to Mr. Robert Fulton who introduced steam navigation into America. But however this may be, it is certain that Mr. Bell first successfully applied steam to this important purpose in Europe. He had the Comet built at Port-Glasgow, and afterwards fitted up with a steam engine, which after various experiments, at length began to ply on the Clyde between Glasgow and Greenock in the year 1812. Like many other projectors, however, Mr. Bell did not reap the fruits of his ingenuity. Wealthier speculators followed in his footsteps, and the waters of the Clyde soon bore numerous larger and more commodious steam vessels than his. Application has been made to government for a national reward to this enterprising man; but without effect. The magistrates of Glasgow, however, with praiseworthy liberality, have settled an annuity of L50 yearly upon him; and the river trustees have since followed their example by a similar annuity. The public sensible of the benefit he has conferred on his country, have also shown their gratitude by a liberal subscription at present going on, and from which we trust Mr. Bell’s talents will be rewarded.

Helensburgh is now a burgh of barony, and is governed by a provost and two baillies, with a council of four persons, a treasurer, and a clerk. A small harbour for coasting and pleasure vessels forms a very useful appendage to the place.