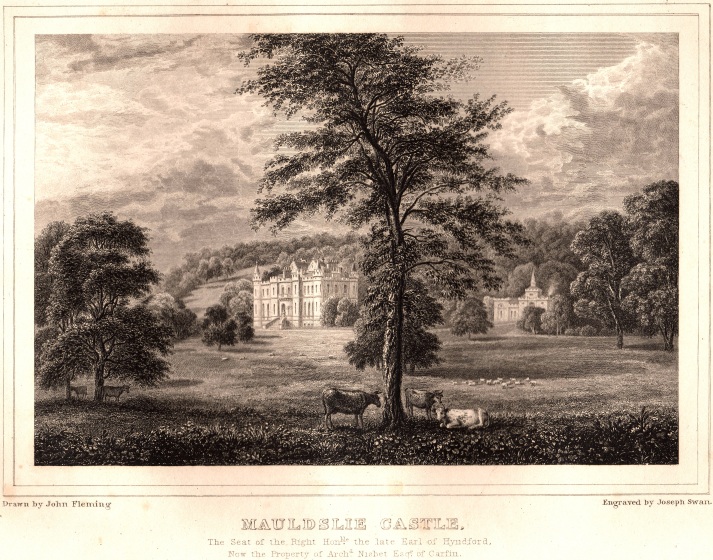 BUT are not wholesome airs, tho’ unperfumed

By roses; and clear suns, tho’ scarcely felt;

And groves if unharmonious, yet secure

From clamour, and whose very silence charms,

To be preferred to smoke, to the eclipse

And to the stir of Commerce, driving slow

And thundering loud with his ten thousand wheels.

MAULDSLIE Castle, the seat of the late Right Honourable the Earl of Hyndford, now the property of Archibald Nisbet Esq. of Carfin, is very pleasantly situated on the north bank of the Clyde, nearly opposite the village of Dalserf, and distant seven miles from Lanark and about the same distance from Hamilton. This building was begun to be erected in 1792 from designs furnished by the celebrated Robert Adam. It is extensive, and of a quadrangular castellated form; but unfortunately possesses a fault too common in a particular class, of that talented Artist’s works, – that of exhibiting different and essentially distinct and inconsistent orders of Achitecture mixed together in the same edifice. The general design is in imitation of an ancient castle, having round turrets at the corners; but the mouldings and ornaments of the façade present the horizontal lines of Grecian Architecture, which are quite unknown in the old English; while the upper parts display, above a battlemented parapet, ornaments more appropriate for a religious edifice, than one in form of a Castle. Yet in making these observations, we would not wish to be considered, as attempting to detract from the undoubted talents of Mr. Adam. During the early and middle periods of his life, when it must be presumed his taste and style were formed,the architecture of the middle ages had been little studied, and was not appreciated. His castellated buildings, or edifices in the old English style, are therefore all failures: it is only where he had an opportunity of displaying his fine Roman taste, which he had cultivated by a careful study of all that was valuable in Italian antiquities, that the genius of the Architect appears.

Notwithstanding, however, the objections we have made to the design of Mauldslie Castle, it must be admitted, that its general effect is impressive. The height and extent alone of the building is sufficient to produce this; and when viewed, from the road on the south bank of the Clyde, whence it is seen to great advantage, few will be found so over-critical as to deny it. But its delightful situation wonderfully encreases the pleasure felt on beholding it. The charming scenery with which it is surrounded; its beautifully wooded park; the green and sloping hills on either hand; and the river flowing rapidly onward through its various windings; form altogether a prospect of such rich and cultivated beauty, that the mind delighted with the whole, can find but little pleasure in detecting architectural blemishes in the building, which forms but a part of the scene.

Indeed all this portion of the vale of the Clyde, including several miles between Hamilton, and Lanark, possesses surpassing beauty; which from its great variety the eye does not become fatigued with contemplating, for

But change of objects?”

In this enchanting stretch of country, gardens and orchards are seen on every hand; stately trees, “pine or monumental oak,” shed their leafy glory around, and cover the sloping banks in some places to the very brink of the stream; and the labours of the husbandman cover the land, gladdening and enriching the scene. The river has now lost its mountain character. It no doubt still rushes onward with great velocity, but its banks have changed their appearance, and the hills instead of approaching close to its bed, and at times almost choaking up its course, now recede to a distance and leave on its margin, beautiful and verdant meadows, richly cultivated, and divided by hedge rows and trees.

The vale of the Clyde between Hamilton and Lanark, and the country around those towns, have long been celebrated for their orchards and their fruit; and as we are now in the very centre of the district, we cannot find a more appropriate opportunity for shortly noticing them. These orchards, while they enrich and beautify the country, are extremely valuable; their fruit, carried to Glasgow or elsewhere, producing, it is said, in a favourable season, independent of what is consumed on the spot, not less than L3000 and L4000. In these orchards, which are in general extremely well managed, the trees are planted in rows about forty feet distant from one another, and from fifteen to twenty feet from plant to plant.1 Besides the large orchards, every kitchen garden is planted with fruit trees; and almost every field is fenced with

We know not, if there be any thing peculiar in the soil, or climate of this pleasant district of country; but it is a fact not unworthy of notice, that, from the very earliest times of which we have any knowledge, its fruit has been celebrated. Merlin, the Caledonian poet, while reprobating the battle of Arderyth, which is supposed by Chalmers to have been fought near Airdrie, is very lavish in praise of the apple trees of  Lanark.2 Merlin lived in the sixth century, and was present at the battle. At a much later period we have in the Memorie of the Somervilles,3 an account of a very unfortunate accident, produced by a too great indulgence in the favourite fruit of Clydesdale. Of the second Lord Somerville it is there said that “he died suddenly upon the twentieth of August 1456, of a surfith of fruit that came from Cambusnethan to Cowthally, as was supposed; for, haveing eaten plentifully of thir fruit at dinner, he dyed before sex at night, being then but in the fyftieth or fourtieth and nynth year of his age.” Cambusnethan is situated a few miles below Mauldslie, nearer Hamilton, and is still famous for its orchards and its fruit.

The fate of the Earldom of Hyndford, which has now become extinct, is rather singular. John the third Earl died in 1767, and was succeeded by his cousin german and namesake. The fourth Earl having afterwards died without issue, was succeeded by Carmichael of Mauldslie. By him, the fifth Earl, Mauldslie Castle was erected, and the lands adjoining laid out with considerable taste. He dying without children was succeeded by his brother, the sixth and last Earl, who having likewise died without children, the male line of the family and the title became alike extinct. The entailed estates have now descended to Sir John Carmichael Anstruther of Anstruther, Baronet, the next heir of entail; the unentailed lands of Mauldslie and the Castle, came to the present proprietor Mr. Nisbet, a nephew of the late Earl.

About two miles above Mauldslie, and one below where the Nethan joins the Clyde, stands the House of Waygateshaw, remarkable as having been, towards the end of the seventeenth century, the property or at least the residence of the notorious Major Weir, who with his sister, was tried for the imaginary crimes of sorcery and witchcraft, although their real crimes seem of themselves sufficiently to have called for the punishment of death, which they both afterwards suffered. Waygateshaw is finely situated on the north bank of the river; but to describe the scenery with which it is surrounded, would only be to repeat what we have already said of Mauldslie. It evidently appears to be a place of considerable antiquity, and formerly to have been a house of some strength. The front of the building is now somewhat modernised, yet in other parts, enough still remains to remind us of the times in which it has been erected. A large arched gateway still stands entire, having on each side a round hole or oillet, such as is common in ancient places of strength. The building exhibited many other similar oillets, but they have been closed up within the last fifty years. In the oldest portion, the walls are of immense thickness, and the rooms very strongly arched.

Waygateshaw is the property of Thomas Steel, Esq.; and has been in the possession of the present family, since the beginning of last century.