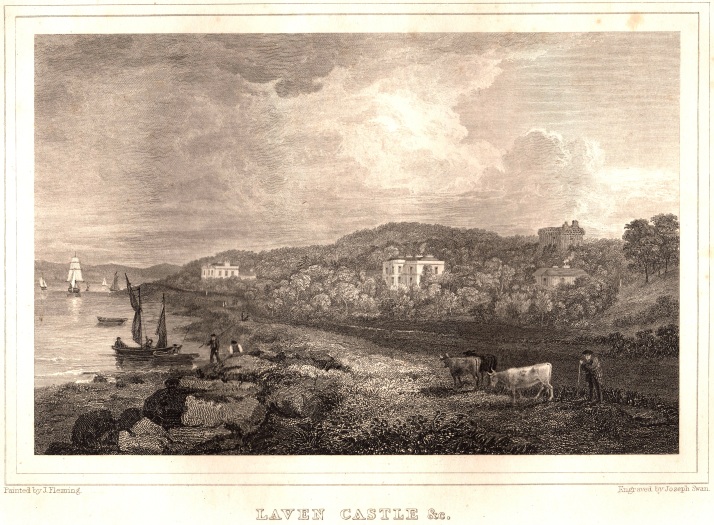 So play’d the golden lustre of my hope

THIS ancient ruin stands on the brow of a hill, which overlooks the coast of the Frith, about three miles below Gourock. Though now considerably delapidated, it is still in better preservation than many a Castle of far greater consequence in the olden time than it was. It has originally formed a large square tower or keep, having like the residences of other proprietors of the time, vaulted apartments on the ground floor, the great Hall occupies the whole of the second floor, and the sleeping apartments appear to have been above. Subsequently an addition has been made to it at one corner, which is carried up the whole height, and which has no doubt been erected for the purpose of enlarging the very limited accommodation the principal tower afforded. What outer defences it had, it is impossible now to say, because if there ever were any they have been long ago removed,and the surrounding ground leveled for a garden. But even without these, its strong walls and iron-bound entrance, would be quite sufficient to protect its inhabitants from the assaults of marauding parties, which probably was all it was ever intended to withstand. Its lofty situation above the sea prevented the danger of a surprise, and the rocky glen, through which runs the rivulet from which it takes its name, afforded it a natural protection in the west side.

Laven Castle although a picturesque and beautiful ruin, possesses no particular interest for the antiquary, farther than as illustrating what has been already probably sufficiently investigated, the form and structure of the towers or houses of defence inhabited by the secondary class of landed proprietors in the feudal times. The poet will find there no tradition of sufficient importance, – no reverend history – to attract his notice of excite his enthusiasm. Of the early possessors little is known, but some of their names; and it is probable they were not of such importance as to make the want of any great consequence.

The most ancient proprietors known, were a family of the surname of Morton. This family failed in the person of Adam Morton of Laven, who alienated the lands in 1547, to William Lord Semple, these lands however did not remain long with the head of this then potent house, Robert Lord Semple having disponed them to Andrew, Master of Semple, his uncle, Nov. 1584. They were afterwards sold to the Shaws of Greenock, from whom they have descended to the present proprietor Sir Michael Shaw Stewart, Bart. of Greenock and Blackhall.

Immediately below the castle and nearer the shore, stand three marine villas, which are seen in the engraving: Laven Cottage, belonging to Miss Stewart, beautifully embosomed amid wood, and situated near the romantic dell through which flows the rivulet already mentioned; Laven Castle house, the property of Mrs. Crooks, an elegant building, surrounded with rather pretty shrubbery, and small but ornamented grounds; and Laven Temple, the property of Mr. McInroy. The ground on which these have been erected is feued from Sir Michael Shaw Stewart, Bart. the Superior.

The views along this part of the coast, though not so extensive as they afterwards become, are extremely diversified, and beautiful. The Highland scenery opposite, here seen to great advantage, up the openings of Loch Long and the Holy Loch is very grand, particularly when seen from the heights near the ancient castle; and when the whole is lighted up with the radiance of a setting summer sun, the mountains of Argyll exhibit a variety of tints, along their broken and rugged surface, which adds almost magic charms to the scene.

The coast road from Gourock to this point, has long been and still is a favourite, and certainly a most interesting walk, for the strangers who yearly visit that pleasant watering place.