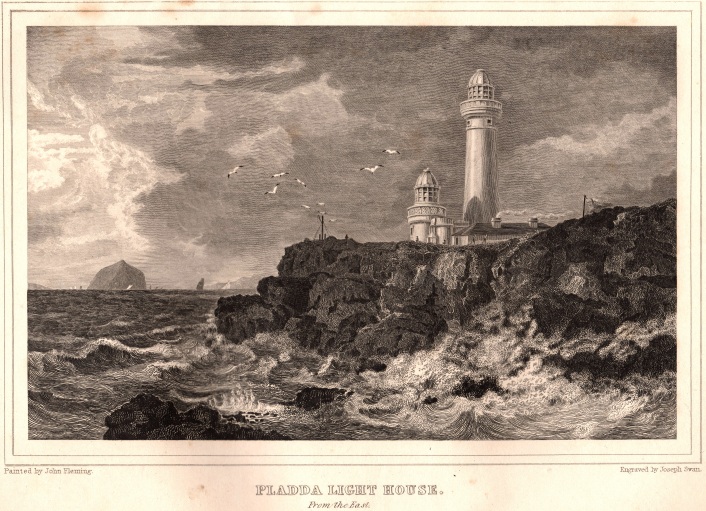 Where unmasked by careless eye,

And each heavy rolling wave,

Breaks above a sailors grave.

PLADDA is a small island, containing a surface of about ten acres of ground, situated at the south end of the Island of Arran, opposite to Benin head. It consists mostly of trap rock, a large cliff of which is found at Benin, and in a line with these two places to the north east, there is another large cliff of the same kind of rock at Kildonan. This rocky little island, as well as the north coast of Arran, must in former times have proved very destructive to the shipping passing up the frith during the night, but shortly after the erection of the Cumbrae, Towart, and Cloch lights, a light house was also erected here. The old light house, however, was a few years ago removed, and new buildings were erected, upon the most recent and improved principles.

The present light house was erected in 1826, from designs by Robert Stevenson, Esq. Civil Engineer to the Commissioners for the Northern lights. The contractor was Mr. Broom, Mason, Glasgow. The light is what is called by Mariners a double light, and as seen at a distance to vessels coming up the frith, it has the appearance of two stars of the largest magnitude. IN order to produce this effect, there are two circular towers of different heights, having each a light of the same size at top. The highest tower is eighty feet in circumference at the bottom. It tapers gently as it ascends, and is surrounded at top, by a projecting entablature, above which there is a handsome balustrade. Above this the lantern rises to the additional height of eight feet, leaving a narrow balcony around it, from whence a very extensive view can be had. The lantern is constructed of copper, with large panes of plate glass, and crowned with a copper dome. The light is produced by a great number of argand lamps, having each a parabolic reflector of silvered copper.

The lower tower is placed immediately in front of the higher one. It rises to the height of thirty feet, is terminated in the same manner as the other, and has a lantern at top, of the same height and size, producing a light of the same appearance, only fifty feet lower down than the other. These towers are placed on a lofty rock just above the sea, at the south side of the island, a situation peculiarly bold and wild. The highest tower presents the appearance of a lofty monumental pillar, forming a singular contrast with the wild and rugged situation on which it has been placed. Nor does the elegance of the internal arrangement, and the neat manner in which every thing is preserved, strike the visitor with the less astonishment, that he finds such a structure, in one of the wildest and most uncivilized of nature’s scenes. Two keepers with their families reside on the island, where they are, for the winter, almost altogether shut out from the society of man.

From the care and attention with which this light house is kept, one would think a shipwreck near to impossible on this coast; we were a good deal surprised, therefore, on visiting it in the summer of 1828, to find the wreck of a vessel lying on the sands near Kildonan in Arran. This had occurred in the preceding winter, and could only have happened through the most gross, and culpable negligence of the master and crew. Instead of bearing away from the light towards the east, in order to clear Arran, this vessel seems to have borne directly towards the light, and passing under it, met its fate among the sands and rocks of Kildonan.

A fine view of Ailsa Craig, or the perch of Clyde as it is sometimes called, is obtained from Pladda, and forms an interesting object in the view of the light house given in the engraving. This extraordinary rock rises abruptly from the sea to the height of 1100 feet. There is no proper landing place upon it, but visitors sometimes land, in calm weather, and scramble up to a considerable height, where the ruins of an old tower, are still to be seen – showing that man has at one time sought security from man, even on this perilous and inaccessible rock. It is now inhabited only by seafowl, myriads of which nestle amidst its rocky cliffs, and are sometimes seen in such immense clouds when on the wing, as to hide the sun from the spectator. The base of the rock forms an irregular ellipse of 3,300 feet in length, and 2,200 feet in breadth. It varies considerably in appearance, according to the side or distance from which it is viewed. Seen on the north and south, it presents to the eye an obtuse cone; while from the east or west, it presents nearly an acute cone. It consists of a vast perpendicular mass of columnar syenetic trap, the columns in some places being 400 feet in length. Towards the north the prospect is most imposing, the whole columnar face being at once visible, and the varied and beautiful arrangement of the pillars distinctly seen. It is the property of the Earl of Cassillis, and is set at a rent of £30, to a tenant, who visits it during the summer for the feathers of the wild fowl which frequent it. A view of this great natural curiosity forms the subject of the vignette on the title page of the work.