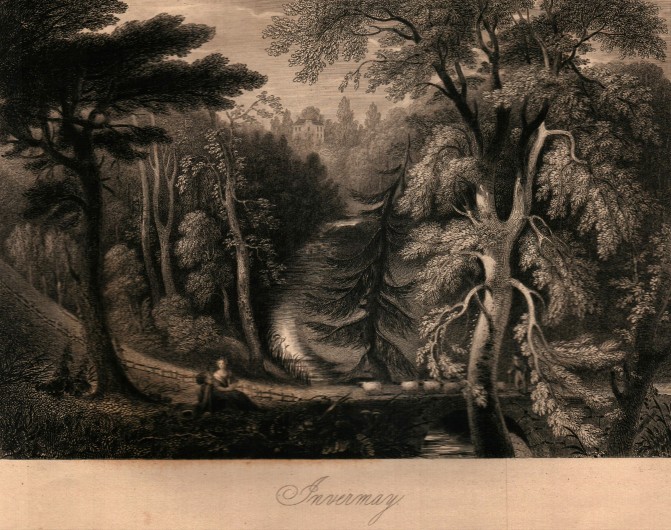 INVERMAY, the seat of A. M. Belshes, Esq., is beautifully situated on the southern side of Strathearn, nearly opposite Dupplin-castle, and about four miles from the Bridge-of-Earn. The May, a small but romantic streamlet issuing from the side of John-hill, one of the Ochills, about two miles south of Dunning, after a curving course of eight miles, enters the woods which surround the House of Invermay, and which still exhibits many specimens of “the birks” which more than a century ago attracted the mure of Mallet, and even then appear to have been old in minstrel fame; for the once-popular song of “the Birks of Invermay” was composed to an air which, it is said, had long before borne the same name. Yet the earliest historical mention of the Barony of Invermay occurs about the beginning of the seventeenth century.

The name Mai or Myae has been traced to the ancient British language, in which it signifies ‘the agitated’ or ‘troubled stream,’ – a name, it is said, always highly descriptive of streams thus denominated as occurring both in Gaelic and Welsh topography. In the present instance, we have a stream of rapid descent, and which often rushes down from the Ochills like a torrent. In one place, at the Linn of Muckersay, it precipitates itself over a perpendicular rock of thirty feet in height; and in another, amidst rugged rocks, and drooping spray, and tufts of shrubbery, and many an element of the picturesque and romantic in scenery, it tumultuates in a cataract of such wild and unwonted sounds as to have suggested for this feature in its course the uncouth designation of the Humble-Bumble.

On a small eminence, called the Haly-hill, a little to the north-west of the present village of Forteviot, about two hundred yards from the site of the present parish-church, stood in ancient times the palace of Forteviot, once the residence of the Pictish kings, “where Kenneth II. departed this life, and where Malcolm Canmore is said to have resided.” Every vestige of its ruins has now disappeared; and even a great part of the site has been swept away into the alluvial plain around by the undermining inroads of the impetuous May. Some old persons, however, are yet alive who remember to have seen a part of the walls yet standing. The birth-place of a natural son of the celebrated Canmore, according to Fordun, or of Duncan, according to Wyntoun, has by local tradition been assigned to this vicinity. Wyntoun relates that King Duncan having been one day engaged in hunting, found himself at nightfall parted from his retinue, and at a loss for lodging, till he came to the mill of Forteviot, where he was hospitably received by the miller, with whom he took “hys gesnyng,” or evening’s entertainment; and that

That to the king had oft repayre.

He took and chesyd that woman

According to the good Prior, the intercourse between the parties was sanctioned by the miller himself; but local tradition points out a small hillock near the site of the Palace as the place where the lovers were wont to meet. This is still called Nell’s Know, after the name of Duncan’s “lemman.” The tradition is curious, and, to a certain extent, tallies with the narrative of our old chroniclers; but one is apt to question that part of the story which represents the king as being benighted, and at such an extreme loss for shelter, in the immediate neighbourhood of a royal palace.

The idea of Wyntoun is adopted in the Old Statistical Account, in regard to the royal personage who had his nativity here. “The mill of Forteviot,” it is said, “and the boat for ferrying over the Earn. The miller’s daughter was mother to Malcolm Canmore.” As Wyntoun could find no higher pedigree, in the female line, for Canmore, he tries to make up for it the best way he could, by giving a particular enumeration of the honourable descendants of ‘the Maid of the Mill.’ For he shows, that she was not only the ancestress of our Scottish royal family, but of that of England, of the Empress Maud, of the Earls of Boulogne, and even of Pope Clement VII.!

Forteviot has acquired additional interest, from the circumstance of the fatal and disgraceful battle of Dupplin having been fought in its immediate vicinity. Edward Baliol, having landed near Kinghorn, and routed the troops under the Earl of Fife who opposed his landing, marched northward, and encamped on the ‘Millar’s Acre’ at Forteviot, August 18th, 1332. The Earl of Mar heard at Perth,

That all thare fays cummyn ware

Had lwgyd in a lytil plas,

The Earl of Mar was encamped, with a numerous army, on a rising ground on the opposite side of the river Earn, near to Dupplin. The contemptible appearance of Baliol’s forces, confined within such narrow bounds, proved a snare to the royal army, who laughed at the idea of danger from a mere handful of enemies. Total carelessness was the natural consequence; and ere day dawned, the English had crossed the river, and attacking an army that had abandoned itself to intemperance, easily put it to a complete rout. Some monuments of antiquity appear in the neighbourhood; but whether they have been erected as memorials of this disastrous battle, or claim an earlier era, is uncertain. “There is a stone cross, quite entire,” says the writer of the Old Statistical Account, a good way up the acclivity, “on the opposite bank of the Ear, almost straight north from the ford by which Baliol’s army passed the river; and another on the south of Forteviot, upon a rising ground, called Dronachy, lying broken over at the pedestal, on which are many emblematical figures. About half-a-mile north from the first of these, a large tumulus or cairn was opened about thirty years ago, – and in it were found some coffins formed of rough flat stones, containing many fragments of bones.” About thirty years ago a stone was found near the site of the palace, having two lambs carved on it. This is now in the possession of Lord Ruthven.

It would appear that the lands of Forteviot remained as royal property till the reign of Robert Bruce, as mention is made of a charter of his, granting “the lands of Kurdeny and Fortuvett” to Duncan Murdisone. We find that Malcolm the son of Mordac, (probably the son or brother of Duncan Murdisone, i.e. Duncan the son of Mordac,) in the reign of Robert II. resigned “the land of Kyndevy, in tenemento de Fortevyot:” and afterwards, by a charter during the same reign, “the lands of Rate, with the lands and miln of Forteviot,” are given by the king to John Stewart, one of his bastard-sons by Marion Cardny. These, with other lands, were entailed to at least four sons by this mother, in succession, to return to the king, if they should all die without heirs. A payment was made, A>D> 1405, to James Stewart of Ffertevyot, out of the customs of Aberdeen, of ten pounds annually, to be paid to him during his life.

There has been some controversy regarding the precise locality of Mallet’s song, already quoted. Allan Cuninghame says he “laid the scene in Endermay, and surely the poet knew his own meaning as well as his commentators. Allan Ramsay, however, changed it to Invermay, and the world has followed the alteration. Dr. Bryce of Kirknewton,” he adds, “was not satisfied with the shortness of Mallet’s song, and added three verses more: it must be confessed they are much in the spirit of the original.” There was little occasion for this controversy, for – as Dr. Jamieson observes – every one who has paid the slightest attention to the pronunciation of local designations in Scotland must have observed that Inner and Ender are far more commonly used than Inver, which is only the pronunciation of the educated classes. Indermay or Endermay is the usual pronunciation of Invermay by the rustic population of the district.