LOCH AWE lies between Loch Fyne and Loch Etive, in the district of Lorn, in Argyleshire. From Inverary, by Glen Aray, it is distant about twelve miles; the distance from Tyndrum, through Glenorchy, is sixteen miles. The chief beauty of Loch Awe is comprised between its eastern extremity and Port Sonnachan, about 6 miles down its southern shore. Here the scenery can hardly be equalled in Great Britain; but the remaining portion of the lake is rather uninteresting to the traveller, possessing little variety, and neither beauty nor grandeur. At its eastern end, however, the stranger may spend weeks in examining the beauty of its wooded and varied shores and island, or the grandeur of its lofty mountains of rude and savage aspect, but lofty and grand, – “filling,” says Dr. Macculloch, “at once the eye and the picture, and literally towering above the clouds.” On the north side, the elevated ridge of Cruachan rises simple and majestic, throwing its dark shadows on the water, which, spacious as we known it to be, seems almost lost amid the magnitude of surrounding objects. On the opposite side, Ben-Laoidh, Ben-a-Chleidh, and Meall-nan-Tighearnan form a striking and magnificent termination to the landscape. Among all the mountains, however, which surround Loch Awe, Ben-Cruachan soars pre-eminent. In approaching Loch Awe though Glen Aray, the traveller finds little to attract his attention after leaving the pleasure grounds around Inverary castle, until he has attained the head of the glen, and begins to descend towards Cladich. There, however, Loch Awe, with its beautiful expanse of water, its islands, and the magnificent screen of mountains which enclose it, bursts at once upon his view. Ben-Cruachan is immediately opposite to him, its summit enveloped among clouds; and the dark pass of the river Awe winding along its base. To the east is seen the castle of Kilchurn, of which a cut is subjoined to this article, the openings of Glen-Strae and Glen-Orchy, and the mountains which enclose them lessening gradually in the distance; to the west the long and sinuous portion of the lake glitters like a silver stream amid the dark heathy hills and moors which form its banks.

Loch Awe is nearly thirty miles in length, but, in the greater part of its extent, not above a mile in breadth. Its eastern portion, however, is considerably broader; and at the opening of the river Awe it is not less than four miles across. Here its beauty is further increased by a number of islands which spot its surface and give relief to its expanse. There is one peculiarity in Loch Awe which is not to be found in any other Highland lake; instead of its being emptied at either end, the river Awe flows from its northern side, and pours its waters in Loch Etive at Bunawe. Looking down upon the loch from Cladich, a long heathy isle, called Innishail, or ‘the Fair island,’ presents itself to the view. In this island, the remains of a small monastery with its chapel are still to be seen; and its ancient burying-ground – which is still sometimes used – is an object of peculiar interest to the lover of old memorials, from its ancient tomb-stones, some of which appear, from the figures cut upon them, to have covered the graves of religious persons; others, having the long two-handed sword, or the claymore, mark the graves of warriors; on others, again, mailed figures point out the resting-place of knights and crusaders; and, one stone in particular, from the arms, coronet, and numerous figures it contains, would lead us to suppose that in this lone spot even the noble had been buried. Among other families, the McArthurs appear to have made this their place of interment, as numerous stones bear the name of individuals of that ancient race. – Beyond Innishail, and farther up the lake, is Innes Fraoch, or ‘the Heather isle,’ on which are the remains of an ancient castle, the residence at one period of the chief of the MacNaughtans. It is a small but strong built fortalice, the haunt of sea-birds and large water-fowl. 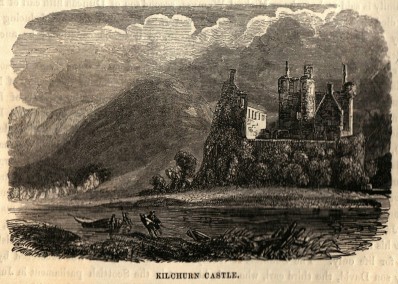