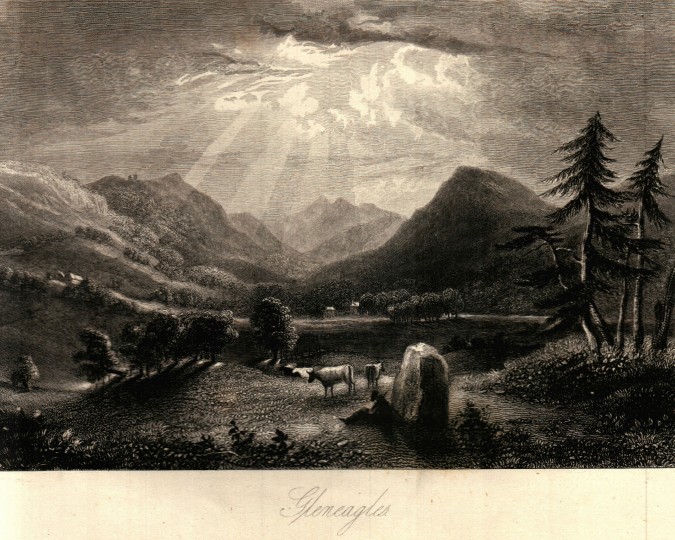 THE water of Ruthven, in its infant course, skirting the north-eastern side of the Braes of Ogilvie, flows through the picturesque Perthshire valley of which we have here presented a spirited engraving, after a sketch by Mr. William Brown of Perth. The vale of this “child of the clouds” may be traced with interest by both the Antiquarian and the Pictorial tourist, from its source on the northern side of the Ochills to its junction with the Earn at the Haughs of Aberuthven. The route will lead the traveller along the line of march pursued by the legions of Agricola, when, in the summer of the year 84, that general, having led his troops through Fife, entered Glendevon, and turning to the right through an opening of the Ochills, passed down, it is supposed, through Gleneagles, to give battle to the Caledonian army on the moor of Ardoch. It will also afford him an opportunity of inspecting the ruins of Kincardine castle, the old seat of the Grahams, and once the residence of the great and gallant Marquess of Montrose. Should he incline to visit a spot of unhappy notoriety in the Ecclesiastical annals of our day, by an easy debouche from the line of the stream, he will have an opportunity of making himself acquainted with the outward but by no means very interesting features of the village of Auchterarder. And should he feel disposed to follow the stream to its junction with the Earn, after leaving, on the right, the snugly planted mansion-house of Damside, and passing through the village of Aberuthven, he will find himself descending into Strathearn, and commanding a fine view of that rich valley as he approaches the banks of its lovely stream.