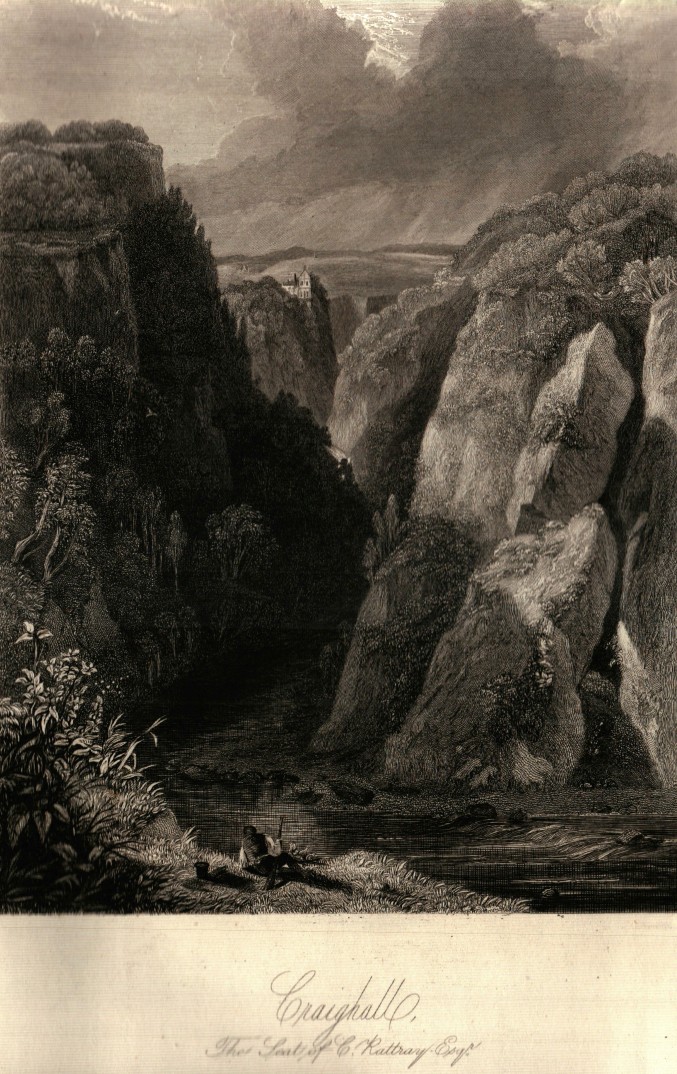 THE Ardle, whose head-streams descend form Glen-Fernate, Loch Loch, and Glen-Brerarchan in Moulin, after flowing rapidly through the picturesque district of Strath-Ardle, the ancient Strath-na-mhuic-bric, or ‘Glen of the Brindled sow,’ unites with the Shee, known also as the Blackwater, collecting its head-streams in Glen-Lochy and Glen-Beg, and descending through Glen-Shee, a little below the bridge of Cally: the united streams assume the name of the Ericht, which rushing over a rocky and uneven channel, of varying depth and breadth, a turbid and eddying stream when swollen by the autumnal rains or winter thaws, has often committed fearful devastations on the adjoining lands, and won for itself the far-known appellation of ‘the ireful Ericht.’ In many parts, however, of its course, the Ericht, however high in flood, has its fury effectually controlled by banks of great height, in some parts clothed with tall trees, in other parts rising in grand and picturesque conglomerate cliffs, or rocks thinly clad with scanty vegetation and creeping shrubs. About two miles north of the village of Blairgowrie, they present a scene which excites the admiration of every tourist, and greatly resembles that on the Beauly, above the falls of Kimorack; rising on both sides to the height of two hundred feet above the bed of the river, and forming a deep rocky gorge above seven hundred feet in length, through which the river forces its way, murmuring and foaming round huge blocks which the touch of Time has detached from the impending cliffs, or shooting over the smooth rock in a sheet of silvery foam. Here, clinging like a swallow’s nest to the craggiest summit of the eastern bank, and harmonizing perfectly with the adjacent rocks, appears the house of Craighall, one of the most romantic residences in Great Britain, “The situation of it,” says Pennant, “is romantic beyond the power of description. It is placed in the midst of a deep glen, surrounded on all sides with wide-extended dreary heaths, where are still to be seen the rude monuments of thousands of our ancestors who here fought and fell. The house itself stands on the brow of a vast precipice, at the foot of which the river Ericht runs deep and sullen along. It commands a prospect for the space of half-a-mile northward, the most pleasant and most awful that can be conceived. About twice the distance now mentioned, the river – that had for many miles glided along beautifully sloping banks, covered with trees of various kinds planted by the hand of Nature – feels itself confined in a narrow channel by rocks of an astonishing height, through the chinks of which the oaks shoot forth and embrace each other from opposite sides, so as to exclude the kindly influences of the sun, and to occasion almost a total darkness below. The stream, concealed from our view, makes a tremendous noise, as if affrighted by the horrors of its confinement. The echoing of the caves on every side render the scene still more dreadful. At length the river is diverted in its course by a promotory of a great height, vulgarly called Lady Lindsay’s castle. Near the summit, this rock is separated into two divisions, each of which rises to a considerable height, opposite one to another, and appear like walls hewn out of solid stone. In the intermediate space, fame says, this adventurous heroine fixed her residence. After a few more windings, the river directs its course to Craighall, having saluted several impending precipices as it rushed along, – particularly one of enormous size and smooth in front, [Craigleagh or Craiglioch,] at the base of which, in a hollow cavern, is heard a continual dropping of water at regular intervals.” A projecting balcony, at the northern windows, places the spectator directly over the chasm; and it requires a steady eye and cool head to look down unappalled into the fearful depth of the yawning abyss below. Our painter, Mr. D. Mackenzie, has caught the novel and picturesque effect of the scene. 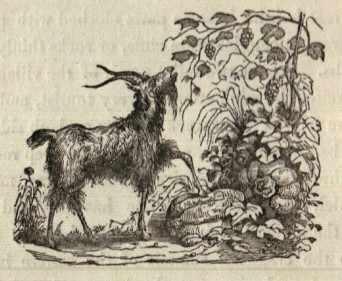