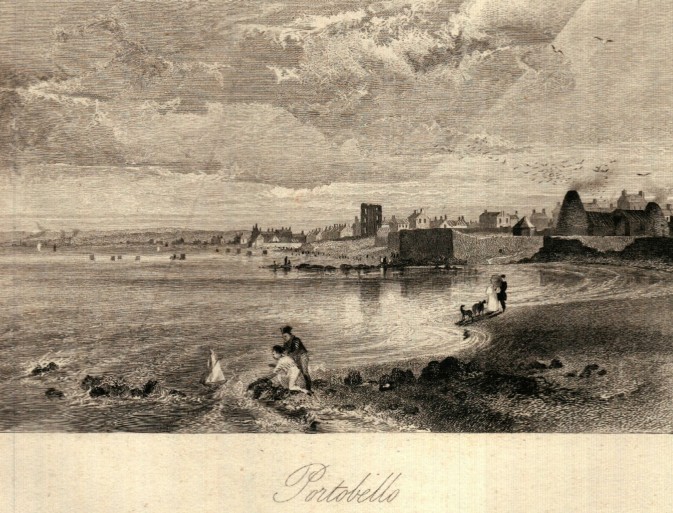 PORTOBELLO, recently a village, now a modern town, a parliamentary burgh, and a fashionable summer-resort, is situated on the shore of the frith of Forth, three miles east of Edinburgh, and the same distance from Musselburgh. Previous to 1762, the ground on which it stands, and the rich, fertile, and highly cultivated lands in its vicinity, were an unenclosed and unproductive waste called the Figgate-whins, covered with tall furze and thin and stinted herbage, sweeping down to the naked sea-beach in an expanse of dreariness, and relieved, in the repulsiveness of its aspect, by the presence of only one human dwelling. The lands were then let to one of the Duddingston tenants for 200 merks Scottish a-year, or £11 2s. 2¾d. sterling; and in 1762 or 1763, they were sold by Lord Milton to Baron Muir for about £1,500. Immediately after being sold, they began to be feued out at £3 per acre; and so early as 1804, they had, in some instances, been subfeued at a feu-duty, or perpetual rent, for each acre of £40 a-year. Even the solitary human abode which sat amid their original waste, and was destined to give its name to the town, had a comparatively recent origin, and still stands on the south-west side of High-street nearly opposite Regent-street, an object of peculiar interest to the townspeople, and of curiosity to strangers. The building is an humble cottage; it was built by a sailor, or marine, who had served under Admiral Vernon, in his South American expedition of 1739, and was called by him Porto-Bello, in memory of his having acted a part in the capture of the town of that name in America. In 1765, Mr. William Jamieson, the feuar under Baron Muir, discovered near the Figgate-burn, a valuable bed of clay; and he erected on the banks of the stream, first a brick and tile work, and afterwards an earthenware manufactory. These public works, as well as others which followed them, necessarily made the place a seat of population, occasioned the appearance of a thriving village, and, by their continuance and prosperity, have powerfully aided the expansion of that village into a town. About the beginning of the century, the beauty of the beach, the fineness of its sands, and its general eligibility as a bathing-place, began to draw the attention of the citizens of Edinburgh, and speedily won for the incipient town a fame which prompted the erection of numerous villas and dwelling-houses, and which has steadily and increasingly secured a general local prosperity.

The present town is but partially compact or continuous; and, in most of its street-lines, is not completely edificed, while in two or three it has hardly a house. The whole, including both real and projected, forms a belt along the margin of the beach, seven furlongs in length by from 200 to 350 yards in breadth, with one large and several smaller projections from the landward side into the interior. The principal street forms the edge of the belt, and extends from north-west to south-east; bearing, over its north-west end, the name of High-street, and over the remaining part the name of Abercorn-street. The two parts of the thoroughfare, though each straight in itself, are a quarter-point or two from being on a line with each other; and both are spacious, and carry along the Edinburgh and London mailroad. The Figgate-burn intersects the town near the north-west end; the only parts on the Leith side of the stream being a kind of street of no great length along the Fishwives’ causeway, and an area of about 400 square yards disposed in partially edificed thoroughfares. All the principal streets south-east of the burn send off at brief intervals, and generally at right angles, alleys and streets to the beach. Those on the north-west are narrow and belong to the early periods of the town’s existence; and those in the middle district, and toward the south-east, become increasingly elegant, and at the same time increasingly unedificed, or streets in futuro, as the distance recedes from the burn. The principal – mentioning them in regular order – bear the names of Tower, Bath, Regent, Wellington, Melville, Pitt, John, James, and Hamilton streets. What – were the town an old one, and had it known the curious piece of masonry which Roman Catholic usages made essential to every marketing locality – would be called the Cross, is a point at which that thoroughfare is divided into its two parts, and whence Bath-street goes off to the sea, and a spacious and beautiful street called Brighton-street runs 400 yards to the south-west. Brighton-street is crossed near its head by an elegant imitation of the frequent street-refinements of Edinburgh, – a crescent, bearing the name of Brighton, and presenting its front or concavity toward the sea. So formidable an array of street-lines, disposed over so great a space, would seem to indicate no small magnitude of town, and a very considerable bulkiness of population. But the principle which for a long period regulated the form of houses, and the disposal of plots of ground, having been merely the individual tastes and convenience of private persons, the town is, to a great extent, an aggregation of villas, has many open areas, and almost as often nestles its houses in umbrageous gardens, as places them in line, or continuously along the skirts of its streets. the parts of it, however, which have been built since about the year 1815, have been reared principally on speculation by builders; and they are greatly more regular, as to both the street lines and the houses, and will probably unite with parts yet, and soon to be erected, to render it one of the neatest, or even one of the most elegant, second-rate provincial towns in Great Britain. The extensive brick-work which figured so prominently in the origination of the town, has contributed much to disfigure it by tempting the construction of many of the houses with bricks. But, over by much the greater part of the area, the building material is the same beautiful light-coloured sandstone which gives so pervading a charm to the architecture of the metropolis; and, as the brick edifices decay, it will probably be used for the houses which succeed them, and be allowed the universal adoption it deserves.

The public buildings of the town hardly correspond, in either numbers or elegance, with its importance. Lodgings of every variety, and accommodations of all sorts usual at such places, exist for the use of sea-bathers, and all classes of summer residents and visitors. Many of the private houses – the mansions and the villas – are the homes of capitalists and annuitants who have adopted Portobello as their constant retreat, and who people it in sufficient numbers to give its resident or unshifting population a tone of selectness and elegance. In winter, the town is far from having the forsaken and wan aspect which pervades a mere sea-bathing station; and, in summer, it has an animation and a gaiety superior to those of any other sea-bathing station in Scotland. Its nearness to “modern Athens,” – its encirclement by a cordon of the Mid-Lothian towns and villages of the most various population, – its position near the lower and waving eastern declivities of Arthur’s seat, – its easy access to a profusion of the choicest and most various promenades, – and its command of the superb and silken scenery of the lower frith of the Forth, with its gentle yet gorgeous Lothian and Fifeshire screens, – combine, with its interior advantages, to render it a place of no common attraction. – The sands of Portobello, or the expanse of beach between high and low water mark, as seen in the foreground of our engraving, consist of the finest and purest debris, slope with a slow and almost insensible gradient, and have an average breadth of very nearly half-a-mile. Facilities, in the shape of wheeled machines, exist for carrying bathers over the inconvenience of the very slow descent. In 1822, George IV. reviewed on the sands a very large body of yeoman-cavalry.

Portobello, in spite of its name, is no sea-port, and neither has, nor probably ever will have, any sea-ward trade. A small harbour was constructed at the mouth of the Figgate-burn, by Mr. Jamieson, soon after his discovery of the clay-bed; but it never was of any use except for boats, and is now completely ruinous.