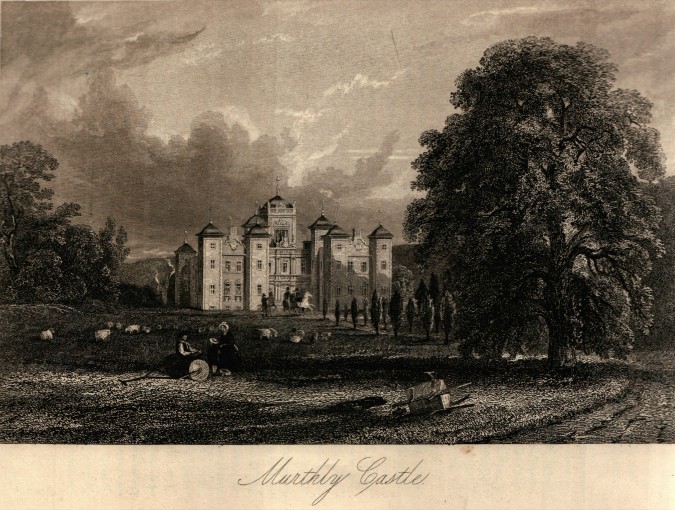 THE tourist, proceeding from Dunkeld to Perth, shortly after bidding adieu to the fair scene formed by the old Cathedral city, its protecting pine-clad mountains, and its noble bridge and river, and clearing the base of classic Birnam, is gladdened by a glorious view of Strathmore, with the ever-magnificent Tay rolling through the rich fields and amidst the verdant groves of that fertile and glittering valley. The foreground of this rich scene, from the point where it first bursts upon the eye, is constituted by the grounds of Murthly, the estate of Sir William Drummond Stewart, Baronet, whose ancestors acquired it by purchase in the reign of James VI. The old mansion-house of Murthly is a fine antique building, and beautifully situated; but the present proprietor has erected the splendid Elizabethan edifice of which we have given a view, on a still finer site, within a short distance of it. It is unfinished and uninhabited, its present lord choosing rather to seek his amusement in regions

“Where the Indian arrow flies,’

than to dwell in his own ancestral home, or in the palace of his own rearing, and amongst his own people. Let us hope that ere long Sir William will

“spread his festal board,

And hang his mantle and his sword

With his armour on the wall,

In this too long silent hall.”