Died, July 2, 1591, Robert Scarlett, sexton of Peterborough Cathedral, at the age of 98, having buried two generations of his fellow-creatures.

The first of the queens interred by Scarlett was Catharine, the divorced wife of Henry VIII., who died in 1535 at Kimbolton Castle, in Huntingdonshire. The second was Mary Queen of Scots, who was beheaded at Fotheringay in 1587, and first interred here, though subsequently transported to Westminster Abbey.

The curiosity of boys regarding graves and funerals is one of their most irrepressible passions. Every grave-digger who works in a churchyard open to the public, knows this well by troublesome experience. An old man, who about fifty years ago pursued this melancholy trade at Falkirk, in Scotland, always made a paction with the boys before beginning – ‘Noo, laddies, ye maun bide awa for a while, and no tramp back the mools into the grave, and I’ll be sure to bring ye a’ forrit, and let ye see the grave, when it’s dune.’

July 2 [1600]. – John Kincaid of Warriston, near Edinburgh, was married to a handsome young woman, named Jean Livingstone, daughter to a man of fortune and influence, the Laird of Dunipace. Owing to alleged maltreatment, the young wife conceived a deadly hatred of her husband. A base-minded nurse was near to whisper means and ways of revenge, and the lady was induced to tamper with a young man named Robert Weir, a servant of her father, to become the instrument. At an early hour in the morning above noted, Weir came to Warriston, and being admitted by the lady into the gentleman’s chamber, there fell upon him with his fists, and soon accomplished his death. While Weir fled, the lady remained at home, along with the nurse. Both were immediately seized, subjected to a summary kind of trial before the magistrates, and condemned to death.

In the brief interval between the sentence and execution, this unfortunate young creature – she was only twenty-one – was brought, by the discourse of an amiable clergyman, from a state of callous indifference to one of lively sensibility and religious resignation. Her case was reported in a small pamphlet of the day. She stated that, on Weir assaulting her husband, she went to the hall and waited till the deed was done. She thought she still heard the pitiful cries uttered by her husband while struggling with his murderer. Afterwards, by way of dissembling, she tried to weep; but not a tear could she shed. She could only regard her approaching death as a just expiation of her offence. Her relations, feeling shamed by her guilt and its consequences, made interest to obtain that her execution should be as little public as possible, and it was accordingly arranged that, while the nurse was being burnt on the Castle-hill at four in the morning, and thus attracting the attention of any who might be out of their beds, the lady should be conducted to the Girth Cross, at the opposite extremity of the city, and there despatched by the Maiden.

According to the contemporary pamphlet: ‘The whole way, as she went to the place of execution, she behaved herself so cheerfully as if she had been going to her wedding, and not to her death. When she came to the scaffold, and was carried up upon it, she looked up to the Maiden with two longsome looks, for she had never seen it before. This I may say of her, to which all that saw her will bear record, that her only countenance moved [her countenance alone would have excited emotion], although she had not spoken a word. For there appeared such majesty in her countenance and visage, and such a heavenly carriage in her gesture, that many said: “That woman is ravished with a higher spirit than man or woman’s!” ‘ After reading a short address to the multitude at the four corners of the scaffold, she calmly resigned herself to her fate, uttering expressions of devotion till the descent of the axe cut short her speech. 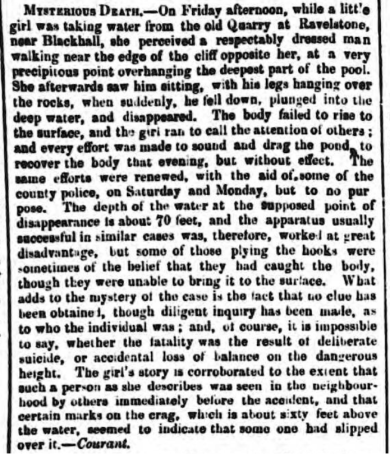 MYSTERIOUS DEATH. – On Friday afternoon, while a little girl was taking water from the old Quarry at Ravelstone, near Blackhall, she perceived a respectably dressed man walking near the edge of the cliff opposite her, at a very precipitous point overhanging the deepest part of the pool. She afterwards saw him sitting, with his legs hanging over the rocks, when suddenly, he fell down, plunged into the deep water, and disappeared. The body failed to rise to the surface, and the girl ran to call the attention of others; and every effort was made to sound and drag the pond, to recover the body that evening, but without effect. The same efforts were renewed, with the aid of some of the county police, on Saturday and Monday, but to no purpose. The depth of the water at the supposed point of disappearance is about 70 feet, and the apparatus usually successful in similar cases was, therefore, worked at great disadvantage, but some of those plying the hooks were sometimes of the belief that they had caught the body, though they were unable to bring it to the surface. What adds to the mystery of the case is the fact that no clue has been obtained, though diligent inquiry has been made, as to who the individual was; and, of course, it is impossible to say, whether the fatality was the result of deliberate suicide, or accidental loss of balance on the dangerous height. The girl’s story is corroborated to the extent that such a person as she describes was seen in the neighbourhood by others immediately before the accident, and that certain marks on the crag, which is about sixty feet above the water, seemed to indicate that some one had slipped over it. – Courant.

One thought on “2nd of July”