The 16th of July, this year [1454], the King calls a parliament of his estates to meet at Edinburgh, wherein the inbringers of [food] were ordained to be cherished, and to be free of custom; for the famine was great this year, and diverse years before.

At length arrived the directions of the Privy Council, to remove the Scotish Queen, to Bolton castle, a house of Lord Scroope’s, in the Northriding of Yorkshire, Hangwest hundred, lying between Escrig, and Middleham. The Queen did not willingly assent to this removal; as it savoured of captivity, which was not avowed: and which she did not readily believe. From Elizabeth’s usage of her, the Scotish Queen thought it to be that of a prisoner. As Sir George Bowes arrived, with forty armed horsemen, on the day, proposed for her removal, the Scotish Queen thought, they had authority to remove her, by force, if she did not go willingly: And, Lord Skirling, one of her attendants, desired Lord Scroope, and Knollys, to witness, that she removed willingly, and not by force. On the 16th of July 1568, the Scotish Queen arrived, at Bolton castle.

Cawdor seems to have attained his object, and after the death of the Countess Dame Annas Keith,1 and of Ardkinglass the comptroller, governed the young Earl, and his kingdom with almost undivided sway.2

1  She died at Edinburgh, 16th July 1588. Her testament gives a valuable statement of the household servants and their wages, and of the house-rent then paid in Edinburgh for a lady of rank – the dowager of two Earldoms, and, at the time of her death, administering one. – Argyll Letters, Maitl. Club.

2  It is to this we owe a little note of travelling expenses in the West Highlands in 1591. – See Appendix VIII.

In 1647 this seal ceased to be used, and a new one of a totally different design was 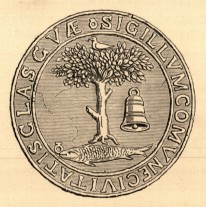 adopted in its place. The change is so complete, indeed, that the two seals have hardly a single feature in common. The bishop’s head is discarded; the miraculous branch is promoted into a full-grown tree; and the salmon, hitherto upright, is placed in a horizontal position. The arrangement of the emblems is almost identical with what now appears on the city arms – the only difference being that the tree is represented eradicated, without any mound, and that the salmon is in the natural position, and not on its back. The representation here given is copied from an impression appended to a charter in favour of the incorporation of Hammermen in Glasgow, dated 16th July, 1650. This seal continued in use for one hundred and forty-three years – a long period also – longer in 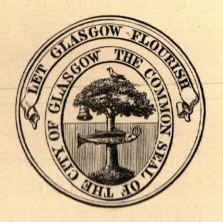 proportion, perhaps, than that of the previous seal, if judged by the greater number of impressions which must have been taken from it. It was replaced, for what reason I cannot conceive, by a seal in which again the position of the emblems is changed. There is no precedent for it, and the whole arrangement is in the worst possible taste. The field is parted per fess argent and gules; the bell is placed on the wrong side, and the fish is raised up and placed across the centre of the stem of the tree. This seal continued in use till the form of the arms was finally settled by the Lord Lyon in 1866, when the seal now in use was made, showing the city arms as then adopted.

The ministers, as a rule, were educated gentlemen, many of them belonging to the best families; and they were undoubtedly the true patriots of the time. Repeated evidences of this occur in their records. In the time of the Commonwealth there was read in the Presbytery of Glasgow a letter from the Presbytery of Edinburgh, subscribed by Mr. Hugh McKail, pointing out the expediency of ministers of their own accord contributing to the defence of the country, and suggesting the levying of a regiment of horse in the interests of Cromwell. This was agreed to – the whole members contributing in proportion to their stipends.1

[The valley of Aven] it was, sir, that Montrose encampit with his army in 1645, after having defeated the godly sons of the Covenant in the bloody field of Auldern, and before marching to glut his cruel spirit by massacring more of them at Alford on the Don. And, as if the soil of this fair spot had not been thus sufficiently polluted, it so chanced that, in June 1689, the bloody Clavers also cumbered it with himself and his followers on his way to the Pass of Killiecrankie, where, on the 16th July thereafter, praise be to the Lord, his wicked existence was at last put an end to.

The Doctor succeeded in his endeavour, and Arthur Rose’s name is found as lieutenant of one of the three additional companies of Lieutenant-Colonel Simon Fraser’s regiment, with instructions for raising his quota of men. dated July 16th, 1757.