Aug. 17 [1579]. – During the night following this day, ‘there blew sic ane tempest at the herring drave of Dunbar, that three-score fisher-boats and three hundred men perished.’ – Moy.

In other matters, besides piper and drummers, and officers in scarlet uniforms, the magistrates, after the Reformation, made provision for their personal dignity. In 1610 a charge appears in the burgh accounts “for grein silk, fustean, and other furnesing to the twa grein claiths to the Counsall satis in the kirkis heich and laich.”1

The last resting-place of Sir Walter Scott, is a small spot of ground in an area formed by four pillars in one of the ruined aisles which belonged to his family. The ground originally belonged to the Halyburtons of Merton, – an ancient and respectable baronial family, of which Sir Walter’s paternal grandmother was a member, and of which Sir Walter himself was the lineal representative. On a side-wall is the following inscription:- “Sub hoc tumulo jacet Joannes Haliburtonus, Barro de Bertoun, vir religione et virtute clarus, qui obiit 17 die Augusti, 1640.” Below his there is a coat-of-arms. On the back-wall the latter history of the spot is expressed on a small tablet, as follows:- “Hunc locum sepulturæ D. Seneschallus, Buchani comes, Gualtero, Thomæ et Roberto Scott, nepotibus Haliburtoni, concessit, 1791;” – that is to say, the Earl of Buchan granted this place of sepulture in 1791, to Walter, Thomas, and Robert Scott, descendants of the Laird of Halyburton. The persons indicated were the father and uncles of Sir Walter Scott; but, though all are dead, no other member of the family lies there, except his uncle Robert, and his deceased lady.

Aug. 17 [1656]. – At four o’clock in the morning, according to Bailie, there was ‘a sensible earthquake’ in all parts of the town of Glasgow, ‘though I felt it not.’ ‘Five or six years ago, there was ane other in the afternoon, which I felt, and was followed by that fearful burning, and all the other shaking [that] has been among us since. The Lord preserve us from his too well-deserved judgments!’

Aug. 17 [1661]. –  This day, John Ray, the eminent naturalist, entered Scotland for a short excursion. In the Itineraries which he has left, he gives, besides zoological observations, some notes on general matters. ‘The Scots, generally (that is, the poorer sort), wear, the men blue bonnets on their heads, and some russet; the women only white linen, which hangs down their backs as if a napkin were pinned about them. 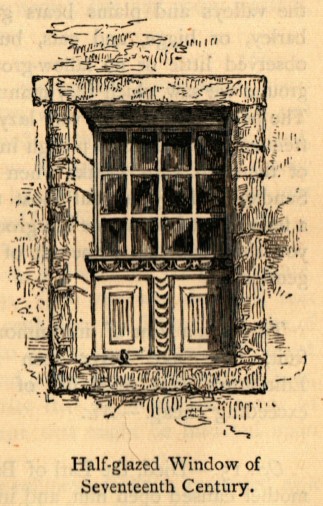 When they go abroad, none of them wear hats, but a party-coloured blanket which they call a plaid, over their heads and shoulders. The women, generally, to us seemed none of the handsomest. They are not very cleanly in their houses, and but sluttish in dressing their meat. Their way of washing linen is to tuck up their coats, and tread them with their feet in a tub. They have a custom to make up the fronts of their houses, even in their principal towns, with fir-boards nailed one over another, in which are often made many round holes or windows to put out their heads [called shots or shot-windows]. In the best Scottish houses, even the king’s palaces, the windows are not glazed throughout, but the upper part only; the lower have two wooden shuts or folds to open at pleasure and admit the fresh air. The Scots cannot endure to hear their country or countrymen spoken against. They have neither good bread, cheese, or drink. They cannot make them, nor will they learn. their butter is very indifferent, and one would wonder how they could contrive to make it so bad. They use much pottage, made of coal-wort, which they call keal, sometimes broth of decorticated barley. The ordinary country houses are pitiful cots, built of stone, and covered with turves, having in them but one room, many of them no chimneys, the windows very small holes, and not glazed. In the most stately and fashionable houses in great towns, instead of ceiling, they cover the chambers with fir-boards, nailed on the roof within side. They have rarely any bellows or warming-pans. It is the manner in some places there to lay on but one sheet as large as two, turned up from the feet upwards. The ground in the valleys and plains bears good corn, but especially beer-barley, or bigge, and oats, but rarely wheat and rye. We observed little or no fallow-grounds in Scotland; some layed ground we say which they manured with sea-wreck (sea-weeds). The people seem to be very lazy, at least the men, and may be frequently observed to plough in their cloaks. It is the fashion of them to wear cloaks when they go abroad, especially on Sundays. They lay out most they are worth in clothes, and a fellow that hath scarce ten groats besides to help himself with, you shall see him come out of his smoky cottage clad like a gentleman.’*

*  This is obviously super-biased against Scotland and its people by the English scholar of Religion and Nature. Had the people been uncomfortable they would have amended their way of living. Had they been lazy, nothing would have been achieved. I can forgive the Englishman his bias before I can forgive the Scottish Chambers for his.

1 “ABOUT this tyme when the Toune was so strongly divided in tua contrary factions of merchants and trades2 was Sir Androw Ramsaye chosen Provest of Edenburgh: he after great paines tane by him and considerable indevers betuixt the 2, at last wholly suppressed the same, so that flame, which had almost spread over every individuall persone, was quenched. After that tyme their fell nothing out considerable in the toune (except the sale of the citadell3 by my Lord Lauderdale to the toune for which he got 6000lb Sterling) till the 17 of August 1664, tho the said Sir Androw’s paines was not wanting all this tyme in setling his majesties interest in relation to church affairs, thosse of the toune of Edenburgh being none of the peaceablest nor best set people to the present governement in the Kingdome: on the forsaid 17 day the Toune Counsell deposed Sir William Thomsone their clerk for his maleversation in his office; that same day he engagded all the Advocats that ware in toun, and raised presently a Summonds before the Lords of Session of Reduction of the act of deposition as contrary to the Decreitt arbitrall which appoints, at the electing or deposing of any Servants that hes offices or benefices of the toune, their be a full counsell, the haill Deacons of Crafts being called thereto tymously re integrâ to give their Speciall wote and consultation theirunto, which was not done with Sir William, and some other grounds, weirin after many hearings he succumbed, and the Lords fand the Toune Counsell their act upon the matter was just4 and that the existence of such a fault as was contained in his deposition was resolutor of his gift and did make his right to the place woid…”

4  In Lord Fountainhall’s Historical Notices of Scottish Affairs (Bannatyne Club), i. p. 3, there is a reference to the plea between the “Toune of Edenburgh” and Sir William, in which the Lords “fand the cause of his deposition relevant.”

Aug. 17 [1682]. – A comet began to appear in the north-west. ‘The star was big, and the tail broad and long, at the appearance of four yards.’ It continued visible for twenty days. – Law.

This was the celebrated Halley’s Comet, so called in honour of the illustrious astronomer who first ascertained, by his calculations regarding it, the periodicity of comets. The same object had been observed by Kepler in 1607, and by Apian in 1531.

By the beginning of the eighteenth century Glasgow had become known for its manufacture of plaids – that indispensable article of apparel in early times; and when the magistrates resolved to make a present to the Princess of Wales the minute of council bears that “it was judged not improper to send to her Highness a swatch of plaids as the manufacture peculiar to this place, for keeping the place in her highness’ remembrance.”1 A number of plaids were forwarded accordingly, and were graciously accepted. The letter by the magistrates to the princess describes the plaids as “what are generally used in Scotland by our women for covers when they goe abroad and by some men for the morning guns [gowns?] or for hangings in bed chambers.” This was at the time of the outbreak of the rebellion of 1715, and the city transmitted at the same time to the king what he, no doubt, valued more than the “swatch of plaids” – namely, an offer to raise and officer a regiment of five hundred men. The offer was received with thanks, but the magistrates were informed that the government had already taken such precautions as would render it unnecessary to put the city to that expense.

Boyd’s Close, or the White Horse Close, as it was often called, opened into Boyd’s Entry from St. Mary’s Wynd. The inn there was more modern, and was larger than Ramsay’s, but had, like his, the principal rooms above the stables; and at this “White Horse” it was that Dr. Johnson, on arriving at Edinburgh on the 17th of August, 1773, put up, and from whence he sent his curt note to Boswell:-

And here it was, as we have related, that Boswell found him storming at the waiter, when he and William Scott, afterwards Lord Stowell, repaired thither, and received an instalment of that domineering manner which excited the aristocratic contempt that old Lord Auchinleck so freely expressed for “the dominie – the auld English dominie, that keepit a schule and ca’ad it an academy.”

One thought on “17th of August”