On this Day in other Sources.

This year there was great famine in Scotland, and 3 moons appeared in the [sky], about 2 in the afternoon; the 25th of September this same year [1484] also, with much fire, thunder and rain, for 3 whole days thereafter.

When she came up to the gentlemen, she said, weeping: “Good gentlemen, I am not privy to any thing intended against the Queen.” When desired Mr. Darrel to open the doors of her coffers, and when she saw, that all her papers were taken away, she said, with indignation, “there were two things, which they could not take away; her English blood; and her Catholic religion.” At this period, Fotheringay castle, in Northamptonshire, was fixed on, by Elizabeth, as the future residence of the Scottish Queen; where she is to remain a prisoner, with some regard to her degree, and quality. The Queen arrived, at Fotheringay, on the 25th of September 1586.

THE Scotish Queen entered the fatal castle of Fortheringay, on the 25th of September 1586, as we have seen. She was already treated, as a criminal; while she only knew, that her secretaries had been arrested, and her most confidential papers carried away, by Elizabeth’s orders, for the guilty purpose of establishing obvious wrong.

The Scotish Queen had, scarcely, arrived, at Fotheringay, when Elizabeth wrote her a letter, which shows, at once, her coarse vulgarity, and domineering temper: She supposed the Scotish Queen, to be void of all conscience, in denying her privity, with the late attempts, notwithstanding the clearest proofs; informed her, that she had appointed commissioners, to charge her, personally, with her guilty conduct, and requiring her, to answer their charges. But, the two Queens acted upon quite different principles: Elizabeth thought of nothing, but her own state, and person: Mary felt, that she had been eighteen years a prisoner to her cousin’s criminal passions, without right, and without a cause. As to Elizabeth’s proofs, they might have been confuted. Mary’s guilt consisted, in continued endeavours to free herself, from a long imprisonment, which, from its commencement, was indefensible, even by Cecil’s ability: And being thus unjustifiable, Elizabeth acted wrong, and Mary acted right. Elizabeth, by inflicting such an imprisonment, avowed her hostility to Mary; while Mary, by that hostility, acquired a right to act with equal hostility against Elizabeth.

ALEXANDER CAMPBELL THE LAIRD OF CALDER

The first proper [fire] engine which they got was in 1725, and it was made in London.1

“All Jacobites,” wrote President Forbes at this time, to Sir Andrew Mitchell, “how prudent soever, became mad; all doubtful people became Jacobites; all bankrupts became heroes, and talked of nothing but hereditary rights and victory. And what was more grievous to men of gallantry – and, if you will believe me, much more mischievous to the public – all the fine ladies, if you will except one or two, became passionately fond of the young adventurer, and used all their arts and industry for him in the most temperate manner.” 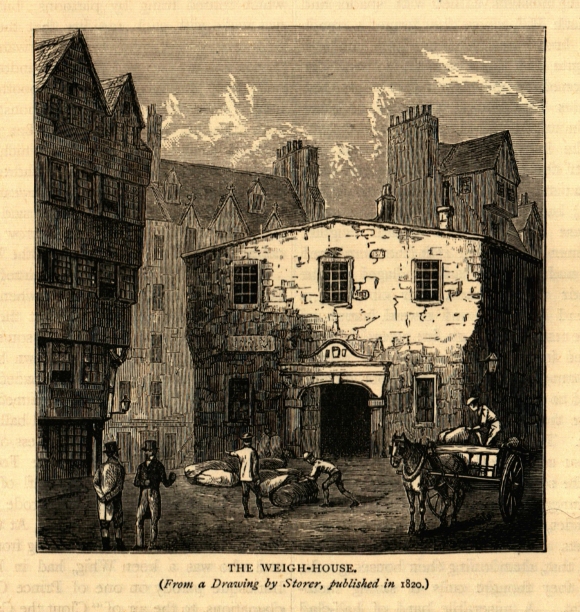 Meanwhile the garrison in the Castle obtained from certain Whig friends a supply of provisions, which, by ropes, they drew up in barrels and baskets, on the west side of the rock; but neither the Highlanders nor the citizens suffered any molestation till the night of the 25th September [1745], when the veteran Preston, on going his rounds in a wheel-chair, being alarmed by a sound like that of goats scrambling among the rocks, he declared it to be a Highland escalade, and opened a fire of musketry and cannon from Drury’s battery, beating down several houses in the West Port.

In consequence of this the prince strengthened his picket at the Weigh-house, to prevent all intercourse with the fortress, upon which Preston wrote to Provost Stewart, intimating that unless free communication was permitted he would open a heavy cannonade. On this, the town council represented to the prince the danger in which the city stood. “Gentlemen,” he replied, “I am equally concerned and surprised at the barbarity of those who would bring distress upon the city for what its inhabitants have not the power to prevent; but if, out of compassion, I should remove my guards from the Castle, you might with equal reason require me to abandon the city.”

He also assured them that the injuries of the citizens would be repaid out of the estates of the officers in the Castle, “and that reprisals would be made upon all who were known abettors of the German government.” General Preston being further informed that his brother’s house at Valleyfield would be destroyed, he replied that in that case he would cause the war-ships in the Forth to burn down Wemyss Castle, the seat of Lord Elcho’s father; but after some altercation with the council, the grim veteran agreed to suspend hostilities till he received fresh orders from London. Next day, however, owing to some misunderstanding, the Highland picket fired on certain persons who were conveying provisions into the Castle, the guns of which opened on the Weigh-house, killing and wounding several in the streets. Charles retaliated by enforcing a strict blockade; and, in revenge, Preston’s garrison fired on every Highlander that came in sight.

This struck me as particularly pretty Celtic cross. The inscription reads:

One thought on “25th of September”