James Macpherson, who was understood to be the natural son of a gentleman of the district by a gipsy mother, was a conspicuous or leading man in the band; he was a person of goodly figure and great strength and daring, always carrying about with him – how acquired we cannot tell – an example of the two-handed swords of a former age, besides other weapons. He had a talent for music, and was a good player on the violin. It has been stated that some traits of a generous nature occasionally shone out in him; but, on the whole, he was merely a Highland cateran, breaking houses and henroosts, stealing horses and cattle, and living recklessly on the proceeds, like the tribe with which he associated.

Duff, Laird of Braco, founder of the honours and wealth of the Earls of Fife, took a lead at this time in the public affairs of his district. He formed the resolution of trying to give a

check to the lawless proceedings of the Egyptians, by bringing their leaders to justice. It required some courage to face such determined ruffians with arms in their hands, and he had a further difficulty in the territorial prejudices of the Laird of Grant, who regarded some of the robbers as his tenants, and felt bound, accordingly, to protect them from any jurisdiction besides his own. This remark bears particularly upon two named Peter and Donald Brown, who had lived for half a year at a place closely adjacent to Castle-Grant, and the former of whom was regarded as captain of the band.

Finding Macpherson, the Browns, and others at the ‘Summer’s Eve Fair in Keith, the stout-hearted Braco made up his mind to attack them. To pursue a narrative which appears to be authentic: ‘As soon as he observed them in the fair, he desired his brother-in-law, Lesmurdie, to bring him a dozen stout men, which he did. They attacked the villains, who, as they had several of their accomplices with them, made a desperate resistance. On eof them made a pass at Braco with his hanger, intending to run him through the heart; but it slanted along the outside of the ribs, and one of his men immediately stabbed the fellow dead. they then carried Macpherson and [Peter] Brown to a house in Keith, and set three or four stout men to guard them, not expecting any more opposition, as all the rest of the gang were fled. Braco and Lesmurdie were sitting in an upper room concerting the commitment of their prisoners, when the Laird of Grant and thirty men came calling for them, swearing no Duff in Scotland should keep them from him. Braco, hearing the noise of the Grants, came down-stairs, and said, with seeming unconcern and humour: “That he designed to have sent them to prison; but he saw they were too strong a party for him to contend with, and so he must leave them;” but, without losing a moment, he took a turn through the market, found other two justices of peace, kept a court, and assembled sixty stout fellows, with whom he retook the two criminals, and sent them to prison.’

James Macpherson, the two Browns, and James Gordon, were brought before the sheriff of Banffshire at Banff, on the 7th of November 1700, charged with ‘being habit and repute Egyptians and vagabonds, and keeping the markets in their ordinary manner of thieving and purse-cutting’… being guilty also of ‘masterful bangstrie and oppression.’ A procurator appeared on the part of the young Laird of Grant, demanding surrender of the two Browns, to be tried in the court of his regality, within whose bounds they had lived, and offering a culreach or pledge for them; but the demand was overruled, on the ground that the Browns had never been truly domiciliated there. Witnesses were adduced, who detailed many felonies of the prisoners. They had stolen sheep, oxen, and horses; they had broken into houses, and taken away goods; they had robbed men of their purses, and tyrannously oppressed many poor people. It was shown that the band was in the habit of speaking a peculiar language. They often spent whole nights in dancing and debauchery, Peter Brown or Macpherson giving animation to the scene by the strains of the violin. An inhabitant of Keith related how Macpherson came to his house one day, seeking for him, when, nor finding him, he stabbed the bed, to make sure he was not there, and, on going away, set the ale-barrel a-flowing. The jury gave a verdict against all the four prisoners; but sentence was for the meantime passed upon only Macpherson and Gordon, adjudging them to be hanged next market-day.

Macpherson spent the last hours of his life in composing a tune expressive of the reckless courage with which he regarded his fate. He marched to the place of execution, a mile from the town, playing this air on his violin. He even danced to it under the fatal tree. Then he asked if any one in the crowd would accept his fiddle, and keep it as a memorial of Macpherson; and finding no one disposed to do so, he broke the instrument over his knee, and threw himself indignantly from the ladder. Such was the life and death of a man of whom one is tempted to think that, with such qualities as he possessed, he might, in a happier age, have risen to some better distinction than that which unfortunately he has attained.1

1  Burns’s fine ode on Macpherson will be remembered:

He played a spring, and danced it round,

There was, however, an earlier celebration of the robber’s hardihood on a broadside, a copy of which will be found in Herd’s Collection of Scottish Songs (1776).

A long two-handed sword is shown in Duff House, the seat of the Earl of Fife, as that of Macpherson. It is a formidable weapon, four feet three inches long, and having a wavy-edged blade. It is obviously a mediæval weapon, yet, of course, may have been used in a later age.

Nov. 7 [1728]. – ‘Yesterday, one Margaret Gibson, for the crime of theft, was drummed through the city in a very disgraceful manner. Over her neck was fixed a board with spring and bells, which rung as she walked. At some inches distant from her face was fixed a false-face, over which was hung a fox’s tail. In short, she was a very odd spectacle.’ – Edinburgh Evening Courant. 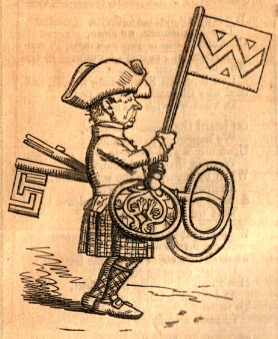 We have no wish to be thought of a Paul-Prying disposition, or desirous to protrude our nasal feature into secrets of the State, but we feel femininely curious to learn why the QUEEN can never travel in her own dominions, without having to pull up at every city that she comes to, and receive a bunch of keys from the hands of the authorities. At Aberdeen the other day, the chroniclers inform us:-

“A magnificent arch was erected at the boundary, and here the ceremony of presenting the keys of the City was performed: the LORD PROVOST, in a few loyal sentences, bidding HER MAJESTY welcome, and the QUEEN expressing gratification at being once more in the City of Aberdeen.”

Now, as far as the loyalty and welcome are concerned, we can see no cause to quarrel with this ceremony; but the presentation of the keys is now a meaningless absurdity, which we are quite sure could not have “gratified” HER MAJESTY. When cities had walls, and city keys had locks to them, there might have been some sense in handing them to royalty; but we regard the ceremony now as an effete superfluity, a piece of mere theatricalism which must annoy the QUEEN, and, indeed, is only fit for the Princess’s. Of course we shall be told that the custom is an “ancient” one, and that loyalty and homage are implied in the observance of it; but to modern minds these ancient customs are of questionable import, and partake rather more of nuisance than advantage.

It really seems ridiculous that in this boasted age of Progress the QUEEN should be arrested by these key-presenting Provosts, who seize on her like button-holders, with their small talk and inanities. It is time the royal road were cleared of these infesters, who do not hesitate to stop the QUEEN upon her own highway; and, presenting keys like pistols rob her of some golden minutes every time they catch her. Paying them attention is as bad as paying turnpikes, and the QUEEN should be relieved of all such taxeson her patience. Of course etiquette demands that she should “express her gratification” at these trials of her temper, but we believe that the QUEEN’s English of her speech is something different. Every time she has to stop to have some City keys presented to her, we can imagine HER MAJESTY saying to herself, “Don’t come stopping me, you tiresome men. Go away, do: and take away those Baubles!”

2 thoughts on “7th of November”