St Marcellus, abbot of the Acœmetes, confessor, about 485. St Evroul, abbot and confessor, 596.

The date of the foundation of Arbroath is of some interest in church and public history. Thomas à Becket, the high church archbishop, was slain at the altar of his own church of Canterbury, on the 29th of December 1170. Two years afterwards, in 1173, he was canonized; and within five years of his canonization, and not more than seven from the period of his death, in the year 1178,1 William King of Scotland had founded, endowed, and dedicated to Saint Thomas the Martyr, the Abbey of Arbroath.

The Queen, having thus paid the attention of her conjugal duty to her wayward husband, went with her retinue, on a visit to Lord Drummond; with whom she remained, till she returned to Stirling, on the 29th of December [1567]:..

The Parliament rose, upon the 29th of December 1567, after establishing the religion, and passing a variety of laws, both moral, and political. On the morrow, the Privy Council resolved, that justice airs should be held, within the several shires, the object whereof was, sufficiently obvious, to oblige every one to obey the regent; and to enable the Regent to harass those, who might be suspected of disaffection to him. As a proper prelude to those courts, four persons were executed, on the 3d of January 1568, who had been convicted of the King’s murder: The persons, who were thus executed, were Dalgleish, Powrie, Hepburn, and Hay; the servants, and friends, of Bothwell: They all acknowledged their guilt; and in their declarations, acquitted the Queen of any knowledge of their guilty act. It was but too much the practice, in those times, of treason, and conspiracy, to inflict rigorous punishment on the low, but to exempt the high: The Regent, the Chancellor, the Secretary of state, and other eminent men, were all more guilty of the King’s murder, than those four who suffered.

James Geddes, being in Edinburgh for the space of some eight days, openly and publicly met, almost daily in the High Street, the Laird of Drummelzier. The latter fearing an attack, albeit that Geddes was always alone, planted spies and retainers about the house in which he lived and other places to which he was in the habit of repairing. It chanced that on the 29th of December, 1592, James Geddes being in the Cowgate, getting his horse shod at the booth of David Lindsay, and being altogether careless of his safety, Drummelzier was informed of his whereabouts, and dividing all his own friends and servants into two armed parties, set forth on slaughter intent.

He directed his brothers John and Robert Tweedie, Porteous of Hawkshaw, Crichton of Quarter, and others, to Conn’s Close, which was directly opposite to the smith’s booth; while he, accompanied by John and Adam Tweedie, sons of the Gudeman of Dura, passed to the Kirk (of Field) Wynd, a little to the westward of the booth, to cut off the victim if he hewed a way to escape; but as he was seen standing at the booth door with his back to them, they shot him down with their pistols in cold blood, and left him lying dead on the spot.

For this the Tweedies were imprisoned in the Castle; but they contrived to compromise the matter with the king, making many fair promises; yet when he was resident at St. James’s, in 1611, he heard that the feud and the fighting in Upper Tweeddale were as bitter as ever.

On 29th December, 1656, the college feued to David Scott two acres “in that part of the burgh of Glasgow called the Long Croft next the Common Lone” for sixty pounds Scots yearly, and liberty of redemption on payment of one thousand pounds Scots – £83, 6s. 8d. The Common Lone afterwards became Sauchiehall Street. 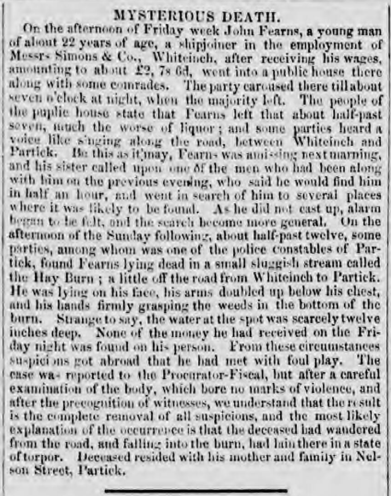 On the afternoon of Friday week John Fearns, a young man of about 22 years of age, a shipjoiner in the employment of Messrs. Simons & Co., Whiteinch, after receiving his wages, amounting to about £2, 7s 6d, went into a public house there along with some comrades. The party caroused there till about seven o’clock at night, when the majority left. The people of the public house state that Fearns left that about half-past seven, much the worse of liquor; and some parties heard a voice like singing along the road, between Whiteinch and Partick. Be this as it may, Fearns was amissing next morning, and his sister called upon one of the men who had been along with him on the previous evening, who said he would find him in half an hour, and went in search of him to several places where it was likely to be found. As he did not cast up, alarm began to be felt, and the search became more general. On the afternoon of the Sunday following, about half-past twelve, some parties, among whom was one of the police constables of Partick, found Fearns lying dead in a small sluggish stream called the Hay Burn; a little off the road from Whiteinch to Partick. He was lying on his face, his arms doubled up below his chest, and his hands firmly grasping the weeds in the bottom of the burn. Strange to say, the water at the spot was scarcely twelve inches deep. None of the money he had received on the Friday night was found on his person. From these circumstances suspicions got abroad that he had met with foul play. The case was reported to the Procurator-Fiscal, but after a careful examination of the body, which bore no marks of violence, and after the precognition of witnesses, we understand that the result is the complete removal of all suspicions, and the most likely explanation of the occurrence is that the deceased had wandered from the road, and falling into the burn, had lain there in a state of torpor. Deceased resided with his mother and family in Nelson Street, Partick.

For example, the warriors always abuse each other before they fight. So do the heroes of Ossian; so do the heroes of Homer; so do soldiers now. In the Times of the 29th of December 1859, in a letter from the camp at Ceuta in this passage:-

“While fighting, even when only exchanging long shots, the Moors keep up a most hideous howling and shrieking, vituperating their enemies in bad Spanish, and making the mountains resound with the often-repeated epithet of ‘perros‘ (dogs.) To this the Spaniards condescend not to reply, except with bullets, although in the civil war it was no unusual thing to hear Carlist and Christina skirmishers abusing each other, and especially indulging in unhandsome reflections upon each others’ Sovereign.”

SIR, – I have read over twice with the deepest interest the letters of ‘A Scotch Advocate’ and ‘W.S.;’ and while agreeing with all that has been written, would like to point out a danger to which some of your correspondents are leading us. The assumption of powers over domiciled Scotsmen by the English Courts, constituting, as it does, a real grievance, they call out for legislation to remedy the evil. Now let us see what this amounts to. There is a conflict between English and Scottish law, and a bill is introduced into the British Parliament to settle the dispute. But in the House of Commons England has 489 members, Scotland 60; there are from 30 to 40 English lawyers in the House, Scotland has only three or four. The English members, although they are well enough disposed towards Scotland will be guided by their own lawyers, and we would simply be borne down by numbers. But what good could come of such a bill? Language cannot be found stronger than the 19th Article of the Treaty of Union, which forbids the English Courts interfering in our law. But they do interfere, says your correspondent, to our serious loss. What then? The remedy in my opinion is an appeal to the Government to restrain the English Judges from breaking the Constitution – it is simply intolerable for them to be permitted to do so. I cannot conceive it possible that Mr Gladstone would permit this iniquity to go on if it were formally brought before him.

Perhaps it may be considered rash in me to differ from so able a lawyer as ‘W.S.’ on the transfer of Government stock; but to my mind he made a great mistake in going to Chancery, when the Bank of England refused to transfer the Government stock on the order of the Court of Session, The Government stock being British, in as much under the Courts of Scotland as England; and when the Bank refused to transfer, he should have complained to the Home Secretary, or brought an action against the Crown in the Court of Session. It is this weak submission to the English Courts that has brought about our present trouble. – I am, &c.