SILVER-MOUNTED WOODEN CHALICE OR MAZER. The bowl, which measures 8 ½ inches in diameter, is made of maple root, and is mounted with a silver rim. It is supported by a silver stem 3 ¾ inches high. In the centre of the inside of the bowl is a silver plate (known technically as the print) riveted to the wood, on the border of which is engraved ‘LEX • PER • MOISEN • DATA • EST • GRĀ • ET • VERITAS • PER • IESŪ • CHRM • FACTA • EST • IO • I.’ On a shield in the centre is a passage from the Vulgate Text, ‘SIVE • MĀDVCATIS • SIVE • BIBITIS • VEL • ALIVD • QVID • FACITIS • ŌIA • IN • ḠLIAM • DEI • FACITE I • CORIN • 10 1567,’ and on a ribbon surrounding the shield, ‘COLLEGIV̄ • NOVVM • S̄CT̄E • ĀDREE.’ Peculiar interest attaches to this vessel from the fact that it is the oldest piece of Scottish silver plate duly Hall-marked which has as yet been discovered. It was made in Edinburgh, and bears all the marks required at that period

i.e. the maker’s mark, the town mark, and the deacon’s mark. The maker’s name is Alexander Auchinleck, who was admitted to the Incorporation of Goldsmiths prior to 1550: the deacon’s mark is that of Thomas Ewing, who held that office between 1552 and 1556, and in 1561: it was therefore made in one of those years.

Originally, no doubt, it was intended for a mazer or wine bowl. For centuries these were the commonest articles in domestic use, and the finest of them were made of maple-wood (whence some derive the name ‘mazer,’ from masarin or maser, an old term for the maple-tree, from its spotted grain), and they were frequently mounted in silver. In the Inventory of the Jewels found in the Castle of Edinburgh, 17th June 1488, there are mentioned ‘Foure Masaris callit King Robert the Brocis with a cover… Item the hede of silver of ane of the coveris of masar.’ These appear to have gone amissing during the reign of James V. Two or three mazers are mentioned among the spoil taken by King Edward I. from the Castle of Edinburgh in 1296. ‘The mazer of St. Erkenwald’ appears in an Inventory of the Dean and Chapter of St. Paul’s at London in 1295. ‘The mazer of St. Thomas of Canterbury’ was among the treasures of King Charles VI. of France in 1399. ‘The mazer of St. Louis’ was shown at St. Denis in 1470.

Most of the early guilds and colleges possessed them, and many are still in existence. In the inventory of the chamber in St. Leonard’s College, St. Andrews, allotted to the principal in the year 1544, there is mentioned ‘ane maizer wt common cups and stoups.’ It is said that this mazer was used as a communion cup by the congregation which worshipped in St. Leonard’s till they got communion plate of their own in 1681. In all probability the mazer belonging to St. Mary’s College was also used for a similar purpose. Figured and described in the Proc. Soc. Antiq. Scot., new series, vol. v. page 141. [A. J. S. B.] (See Fig. 202.)

ROCK CRYSTAL JUG, mounted in silver gilt, presented by Queen Elizabeth to the Regent Mar for the baptism of one of his children. (See Fig. 51, page 54.)

THE ‘LOVING CUP’ OF GEORGE HERIOT, Goldsmith to King James VI. and Founder of Heriot’s Hospital, Edinburgh. He was born in 1563, admitted to the Incorporation of Goldsmiths in 1588: held the office of Deacon in 1598, 1603-4, 1607-8, and died in 1623. For long there has been a tradition that this cup was manufactured by himself: but an examination of the stamps

reveals the fact that the maker was Robert Denneistoun, a contemporary of George Heriot’s, who was admitted to the Incorporation of Goldsmiths in 1597. The deacon’s mark is so much obliterated as to be unrecognisable. [A. J. S. B.] (See Fig. 203.)

(959) Lent by the GOVERNORS OF GEORGE HERIOT’S TRUST, EDINBURGH.

TWO SILVER SPOONS, engraved on the top ‘BB 1578.’ This date so far as it refers to the period at which they were made is misleading. Both spoons bear an Edinburgh Hall-mark, and have the maker’s punch of Peter Neilsone

SILVER PEG TANKARD OR TASSIE, 6 ¼ inches high. It is supported by three claw and ball feet, and is richly embossed with a floral pattern. The characteristic feature of this class of tankard is the number of pegs affixed in a vertical line on the inside, which divide the contents into equal portions. It was customary, when the tankard was handed round, for each guest to drink down to his peg, and he who exceeded that limit was fined for his love of the contents. (That well-known Anglo-Indian beverage, brandy or whisky and soda water mixed, called ‘a peg,’ probably derives its name from this source.) It is described as having been given by one of the Bishops of Orkney to his nephew Sir John Maxwell of Pollok. But this tradition does not coincide with the date of its manufacture. It bears the Edinburgh Hall-mark, and has both the name punch and deacon’s mark of Edward Cleghorn

LARGE SILVER QUAICH, 6 ½ inches in diameter. It has two handles: on one is engraved AC and on the other IMcL. It bears the Edinburgh Hall-mark for the year 1713, and the maker’s punch of Robert Inglis

who was admitted to the Edinburgh Incorporation of Goldsmiths in 1686. [A. J. S. B.]

SILVER KETTLE AND STAND, presented in 1752 by the Town Council of Glasgow ‘to James Stirling, Mathematician, for his service, pains, and trouble in surveying the river towards deepening it by locks.’ It bears the Edinburgh Hall-mark for 1751-2

is stamped with the name punch of Ebenezer Oliphant, who was admitted to the Goldsmith’s Incorporation in 1737. It has also the assay-master’s mark of Hugh Gordon.

James Stirling was a favourite pupil of Robert Simson, the eminent mathematician, born at Kirkton Hall, Ayrshire, in 1687, who was Professor of Mathematics at Glasgow for nearly fifty years, and died in 1768. His edition of Euclid’s Elements is a standard text, and among his other works may be cited Elements of Conic Sections, and The ‘Plane Loci’ of Apollonius Restored. [A. J. S. B.] (See Fig. 205.)

SILVER TABLE-SPOON which belonged to Flora Macdonald. It is engraved with the initials 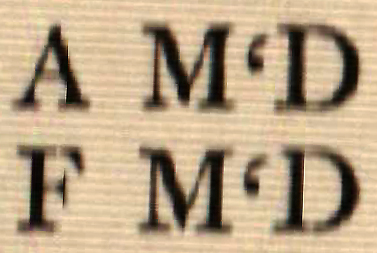 SILVER PUNCH-BOWL, 11 inches in diameter, 5 inches high, ornamented on the rim. It bears the inscription, ‘To George Brown, Esquire of Capilrig, Lieutenant Colonel Commandant of the Eastern Battalion of Renfrewshire Volunteer Infantry, from the Officers of that Regiment.’ It is stamped with the Edinburgh Hall-mark for 1809-10. [A. J. S. B.] (See Fig. 206.)