“THE phenomenal success which distinguished the early proselytising efforts of St. Dominic and his adherents on the Continent was fully maintained in this country. Within the compass of one reign, that of Alexander II. (1214-49), no fewer than nine monasteries of preaching brethren were established in Scotland. The King himself was a munificent patron, and to the issue of a personal interview he had with the founder at Paris in 1217, tradition has attributed the introduction of the Order into his kingdom. There is reason to believe that the settlement of the Glasgow branch was accomplished at the instigation either of Alexander or of his trusted minister, William of Bondington, bishop of Glasgow (1233-58) and chancellor of the kingdom (1231-49). Sir William Sinclair of Roslin records that in 1564 he had been informed by an aged friar that their “place in Glasgow was biggit and foundit be the Bischop and cheptour;”1 and as there is evidence of the convent having been in course of erection in 1246, its principal originator may, with some degree of probability, be identified with the bountiful renovator of Glasgow cathedral. In any case the site must have been obtained from the bishop, then lord of the manor of Glasgow.2 Situated a short distance from his residence and cathedral, occupied by his “men,” and possessing various privileges under royal protection, the bishop’s “burgh” had been established for some time and was in course of further development; and it was midway between the church and this town that the friars procured an allotment. Their buildings and gardens were situated on the right bank of the Molendinar, and on the other side of the burn they also obtained several acres in the Dowhill. The grounds of the convent on the east side of the modern High Street seem to have been surrounded by walls, and to have approached the precincts of the bishop’s castle.3 In the autumn of 1301 King Edward of England was accommodated for a few days in the conventual buildings; and there, also, a century and a half later, were held convocations of the newly founded University. The original “Pedagogy” was situated in the Rottenrow, but in the year 1460 the High Street site, adjoining the property of the friars, was granted to the Faculty of Arts.4 Shortly after this, and when there was doubtless a growing demand for building sites in the neighbourhood, and arrangement was made for disposing of the surplus ground belonging to the friars, as set forth in the Indenture5 of which a translation follows:-

‘IN THE NAME OF GOD, AMEN. By this present public instrument be it evidently known to all that on the twelfth day of June in the year of the incarnation of our Lord one thousand four hundred and sixty seven, in the fifteenth indiction and the third year of the pontificate of the most holy father in Christ our Lord, Paul the second, by divine providence Pope. In presence of venerable and noble men, personally present in the tolbooth of Glasgow, and in presence of me, notary public, and the witnesses underwritten, it was finally agreed between the provost, bailies, and community of the burgh and city of Glasgow, on the one part, and the Prior and Friars Preachers of the Convent of the foresaid city, on the other part, in manner following, that is to say the said prior and convent of the foresaid place have given full consent and assent to the setting in feu farm of certain roods lying contigious in the highway, in the great Wynd (in communi via, in magno vico), at the wall of the said friars, between the entry of the said place from the south to the enclosure of the cemetery thereof in the north; for a certain annual rent to be paid yearly, according to the estimation and discretion of the community of the foresaid burgh and city and of the prior and convent, and their successors for the time being, shall yearly celebrate, pray, and perform exequies, and other divine services or suffrages for our lord the bishop of Glasgow and his successors; also for the community of the said city in all time coming, according to the advice and pleasure (consilium et placabile desiderium) of our said lord bishop of Glasgow and community of the foresaid city and burgh of Glasgow; which condition was made in presence of master Robert of Hammiltoun, then chancellor and chamberlain of the said lord bishop; to which condition the said chamberlain distinctly acknowledged that the foresaid lord bishop had given his express consent and assent. Upon which, all and sundry, John Stewart, provost, and the bailies of the said city, and also a religious man John Mure, then prior of the foresaid Friars Preachers of Glasgow, asked a public instrument to be made to them in form of Indenture; to which instrument remaining with the said provost, bailies, and community of the said city of Glasgow, the common seal of the convent of the said Friars Preachers is affixed to remain for ever; and to the instrument remaining with the said prior convent and their successors for the time being the common seal of the said city of Glasgow is affixed to remain for ever. These things were done in the said city of Glasgow in the year, month, day, indiction, pontificate, and place above written. Present there, the venerable and noble and prudent and discreet men, master Robert of Hammiltoun, chancellor of Glasgow and chamberlain thereof, Alexander Stewart of Galstoun, John Stewart, provost foresaid, John Schaw, bailie, James Stewart, John Armulan, John Oliphant, William Dicsoun, Archibald Wetschaw, Robert Hynde, George Hynde, Robert Brouster, John Wisschart, William Jacsoun, sergeand, and Sir David Rede, notary public, with many other burgesses and citizens of Glasgow, witnesses to the premises specially called and required.

And I John Michael, priest, of the diocese of Glasgow, notary public, by imperial and royal authority, was personally present, together with the witnesses before named, in all and sundry the premises, whilst these things were being transacted, said, and done, as is above set forth; and I saw, knew, and heard them so done, and took a note thereupon, from which I have made, published, and reduced into this public form, this present public instrument, written by the hand of another, and have signed it, subscribing my usual and customary sign and name, in faith and testimony of the truth of the whole premises as asked and required.’ 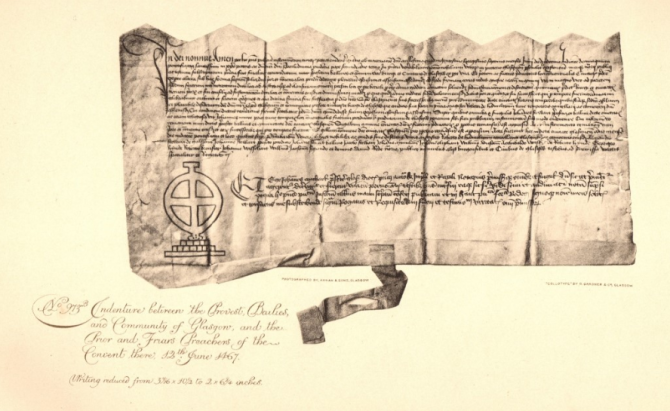 A few sales following on the Indenture are noticed in the printed Munimenta. Thus, in 1468, Thomas Kerd, burgess, acquired two roods of land for the yearly payment of 10s. Scots by himself and 13s. 4d. By his successors; and the property was not to be alienated for a higher rent without the friars’ consent. In the same year two roods, described as lying in the “Freirs Wynd,” were acquired by William Jaksoune, burgess, at the price of 6s. 8d. Yearly; and in 1470 a third portion, situated at the entrance to the Cloister, and described as lying between seven aspen trees, was sold to Thomas Kerd for 3s. Yearly.6

The city’s duplicate of the Indenture, from which, unfortunately, the convent seal has been detached, was recently on view in the “Old Glasgow” Exhibition;; and, being a fine specimen of ancient penmanship, has been selected for facsimile in the forth-coming Illustrated Catalogue. The duplicate belonging to the convent has probably disappeared, as it has not been printed among the other Munimenta.

5 The name usually given to a contract entered into between two parties, and written in duplicate from a blank space in the centre towards each end of the parchment or other material used for the purpose. The material was then divided, along a wavy or indented line in the blank space, and one section given to each party.

* Picture scanned from the ‘Memorial Catalogue of the Old Glasgow Exhibition 1894‘, p.239. The information the book contains on it is:

“973B   Indenture between the Provost, Bailies, and Community of

Glasgow and the Prior and Convent of the Friars’ Preachers

as to the feuing of certain roods adjacent to the Friars’

A translation of this Indenture is given in ‘Scots Lore’