Acts (1715, 1724, 1748 & 1782) restraining the use of Highland Dress, the carrying of weaponry, and the convening of large groups of Scotsmen, due to the Rebellions of 1715 & 1745. Also the taking over of Scotland’s banks and having clergy and schoolmasters take an oath of ‘Britishness’. They were to have the people speak English rather than Gaelic and the schoolmasters had full reign to punish the speaking of Gaelic by schoolchildren [this was a continuation of the School Establishment Act (1616) & the Education Act (1696), before Scotland was in Union with the Westminster government]. The hope was they’d bring the English language home to their parents. When they were deemed fluent enough, they were sent to lowland schools and even to schools in the north of England. This way they returned home after their education fully denuded of their inherited culture. The Acts were designed to last a generation to give British nationalism a chance to take root within the indigenous population. It’s incredible after the 17 pages (1748) really ticking all the boxes on what the Scots couldn’t do, it only took a mere 2 pages (1782) to repeal the whole lot.

The last Act (1832) sets out regulations for the distilling industry. I obtained it as part of my effort to find out more about Scotland’s whisky production and trade. I was enjoying their veneer of equality in the specification of “his or her Distillery”, though they seem to have given up on this by part X. Parts IX., XII. and XII[I]. seem fairly harsh and likely to be detrimental to overall whisky production, though I’m not sure if it was just an over-enthusiastic approach to reforming and ensuring the quality of said production.

The Acts themselves aren’t just a fascinating read, they feel amazing. I think they’re comprised of a cotton/paper blend(?) and the imprint of the lettering is very satisfying. I’m sure you can see the texture in the scans.

1724 – “An Act for the more effectual Disarming the Highlands in that Part of Great Britain called Scotland; and for the better securing the Peace and Quiet of that Part of the Kingdom.”, (Small format, Disbound), Watson, Chapter 25, pp. 368-381. 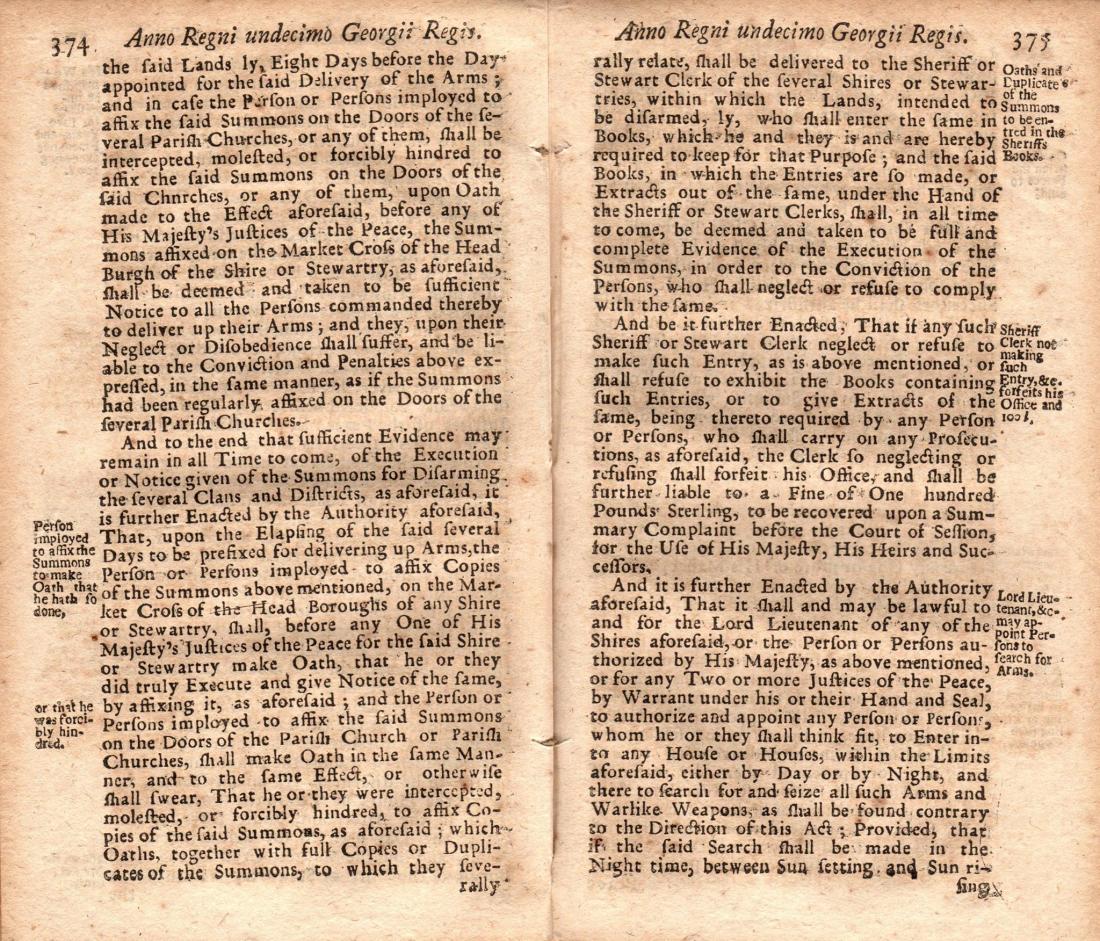 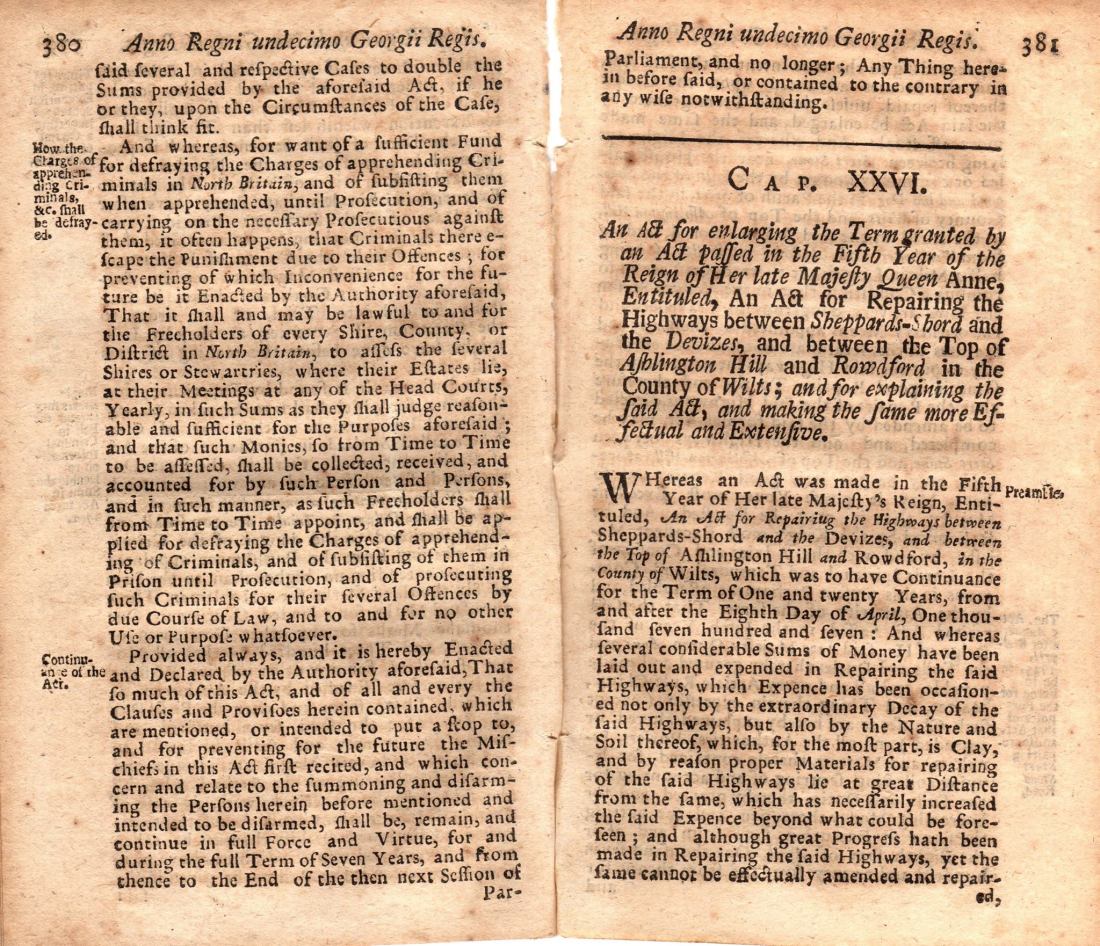 1748 – “An Act to amend and enforce so much of an Act Made in the Nineteenth Year of His Majesty’s Reign, as relates to the more effectual disarming the Highlands in Scotland; and restraining the Use of the Highland Dress,…”,T. Baskett (Disbound), p. 950-966. 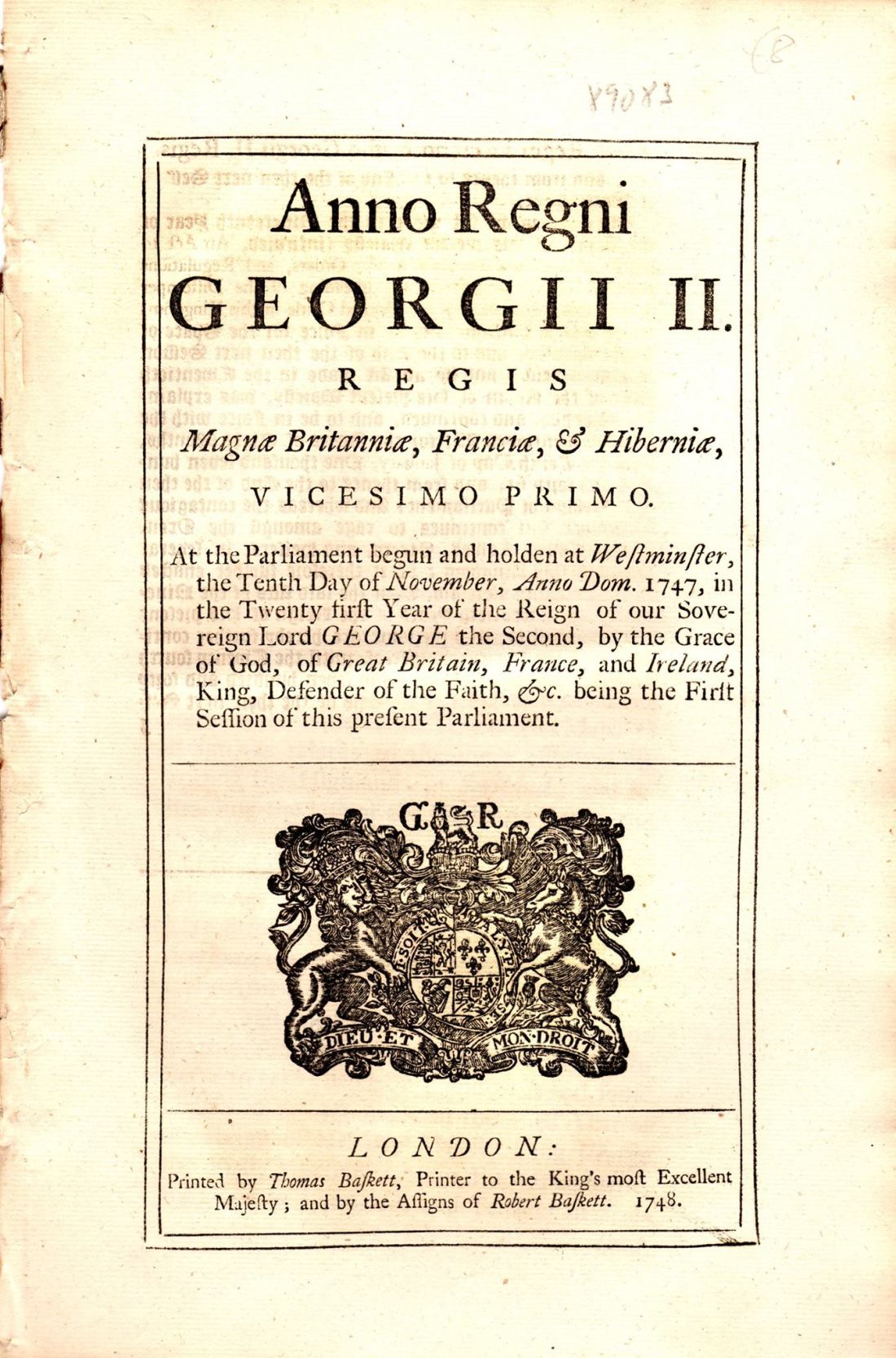 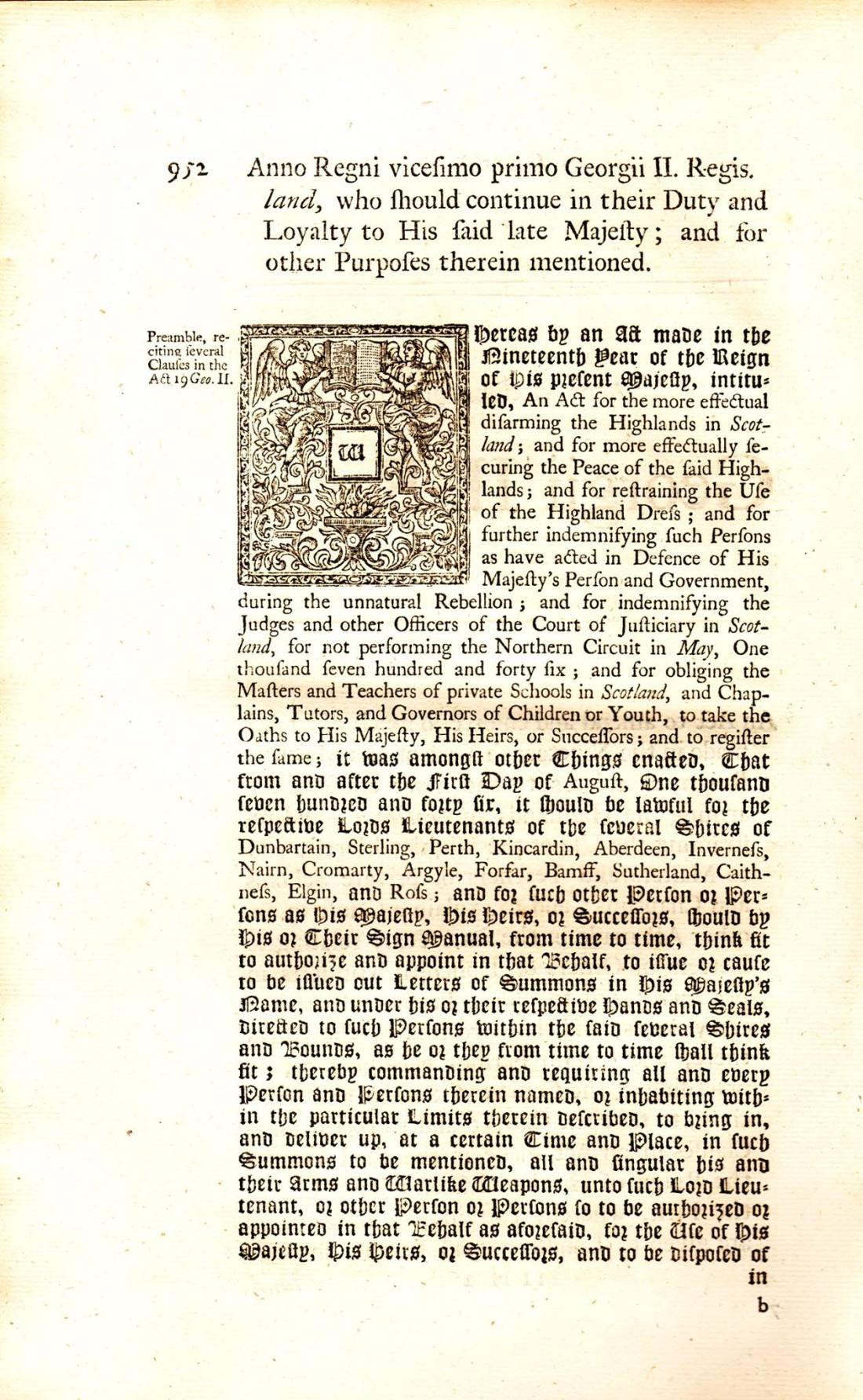 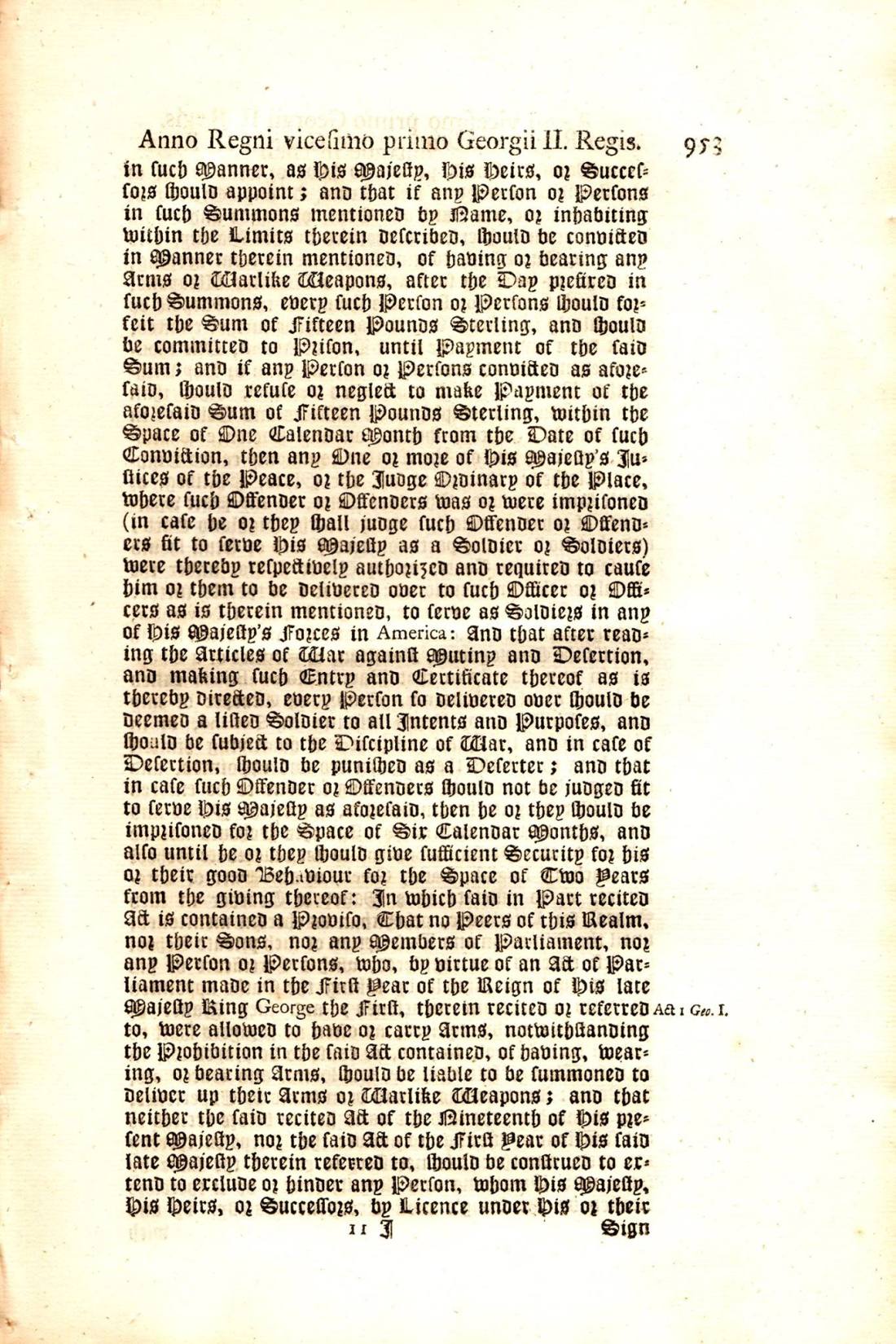 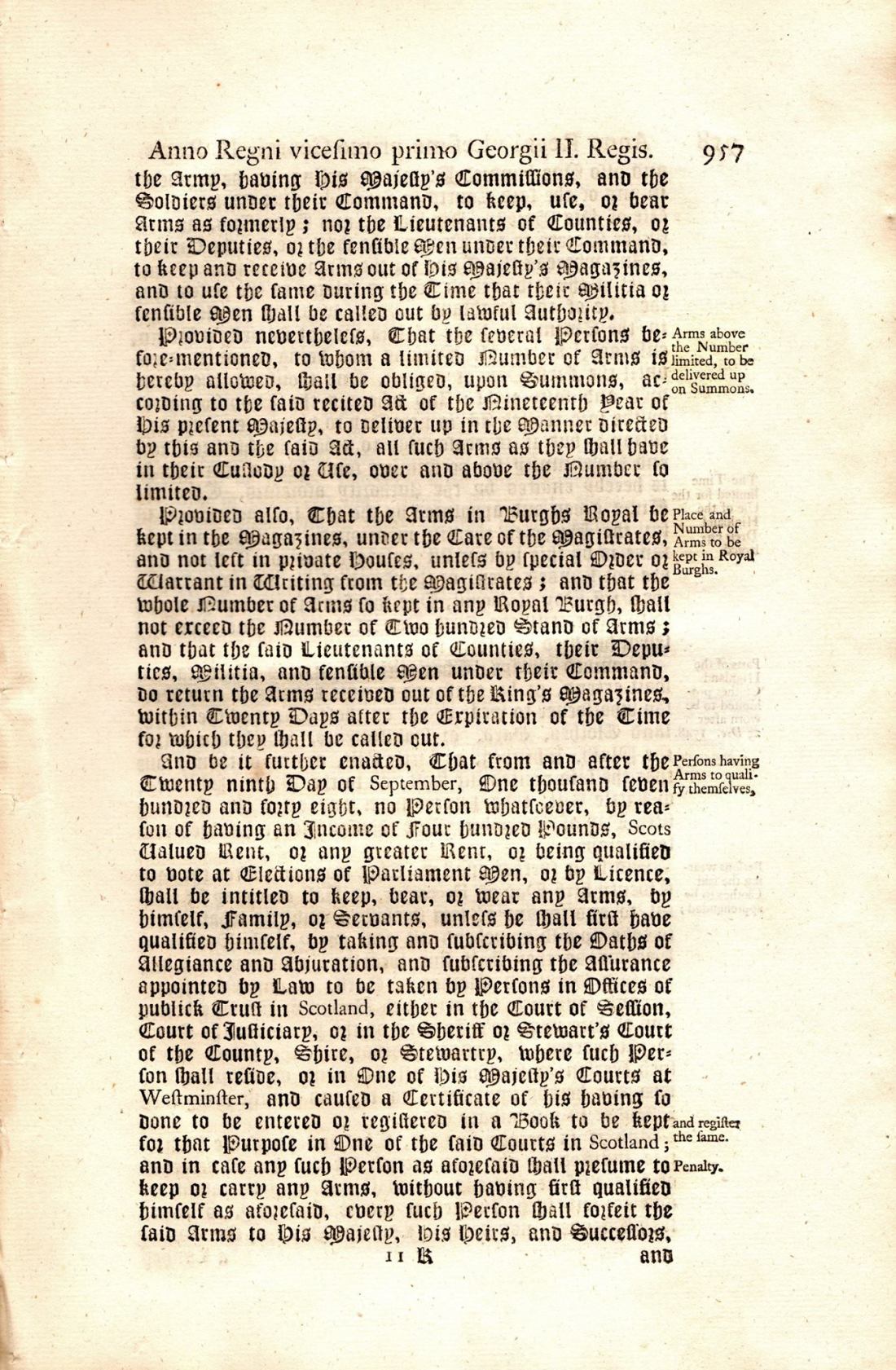 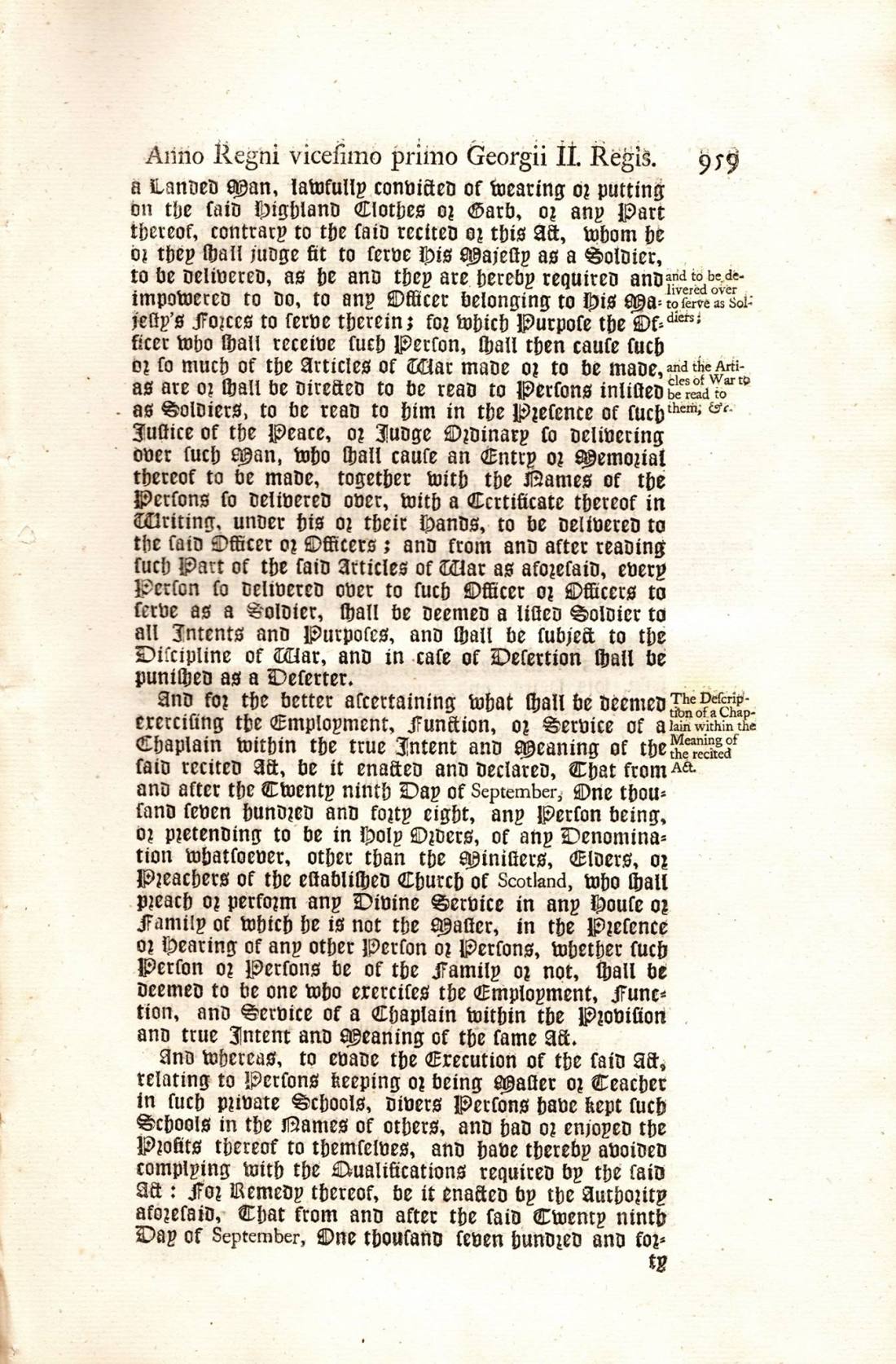 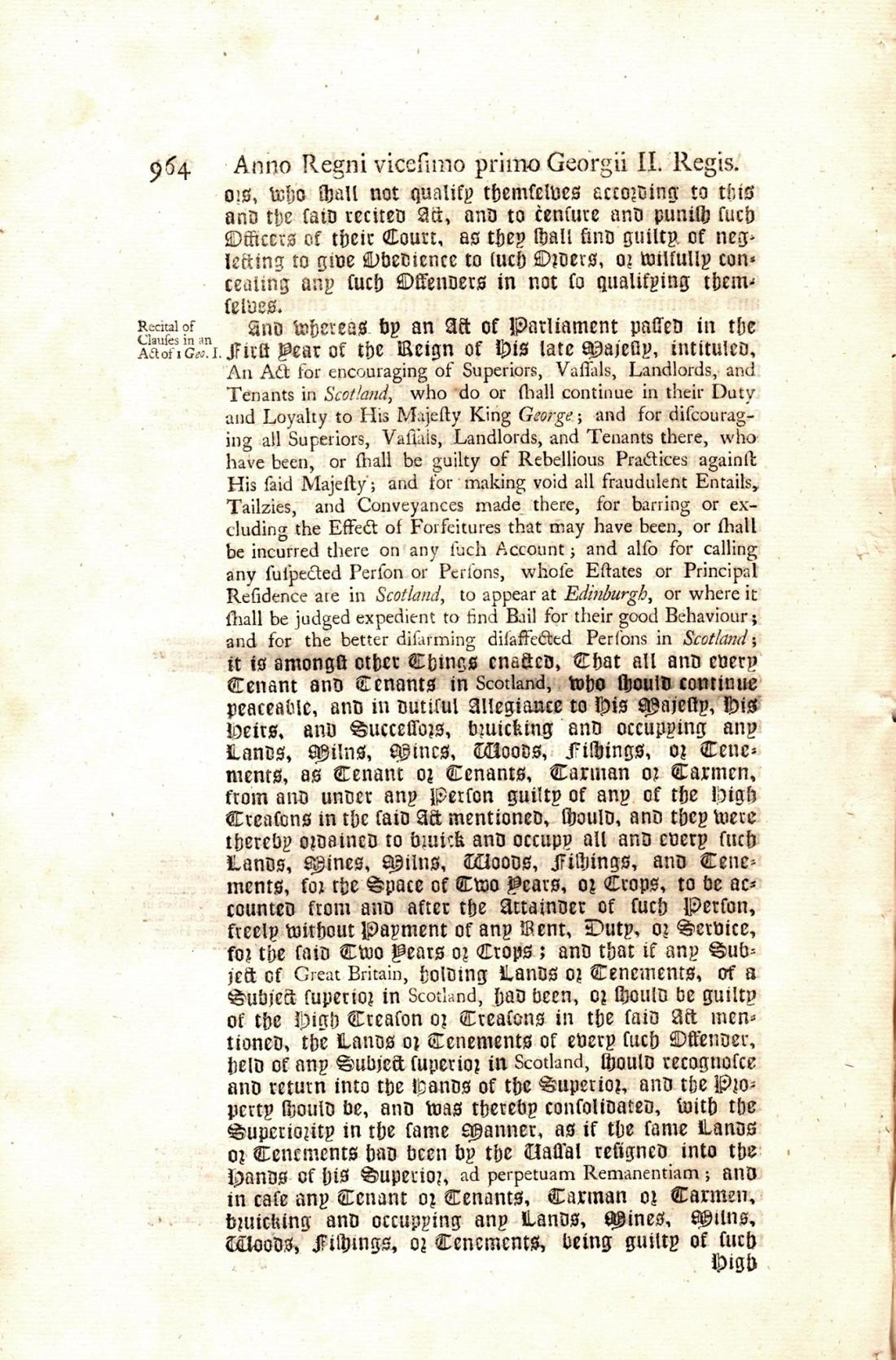 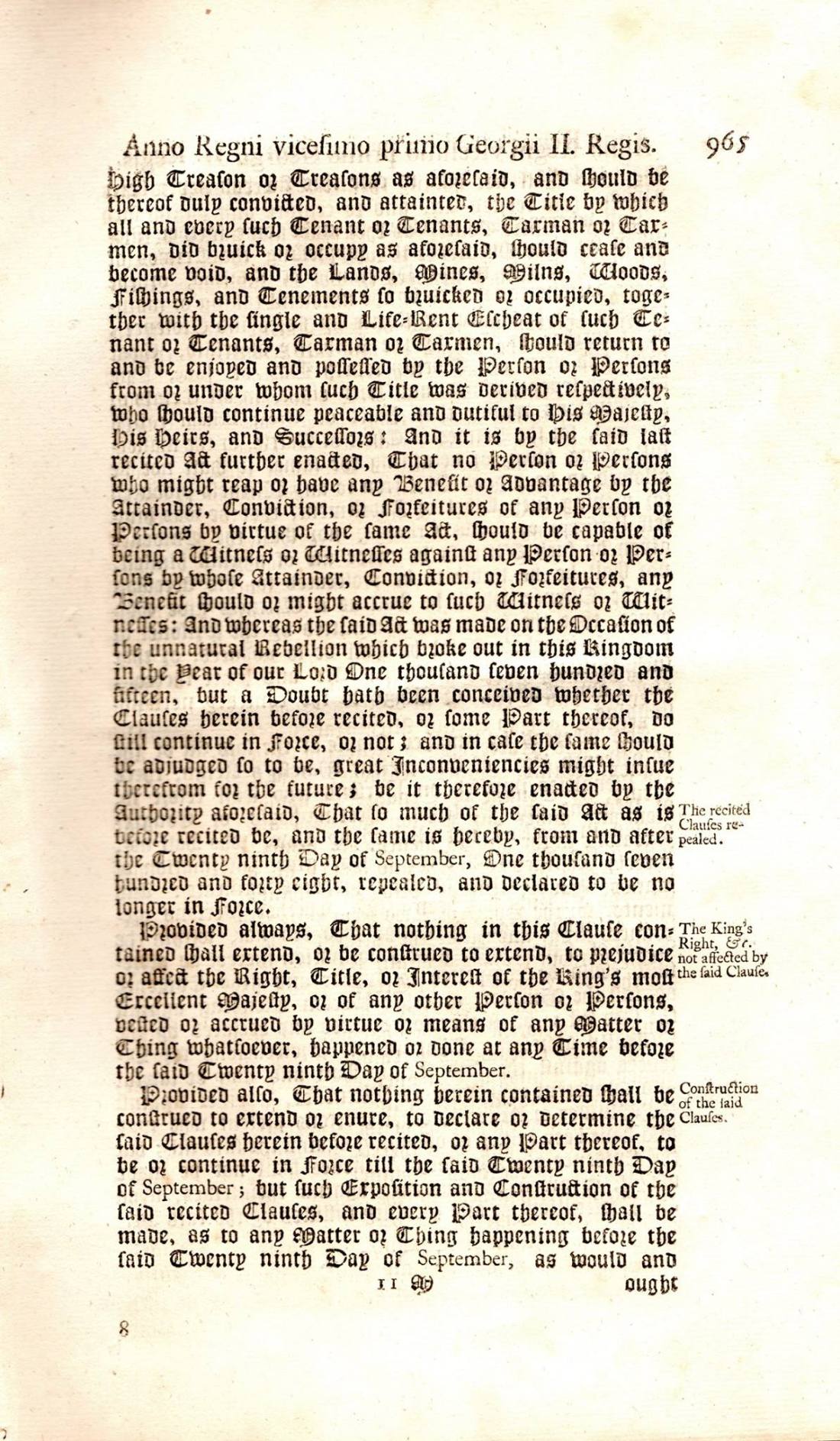 1782 -“An Act to repeal so much of an Act, made in the Nineteenth Year of King George the Second, (for the more effectual disarming the Highlands in Scotland, and for other purposes therein mentioned), as restrains the Use of the Highland Dress.”, ‘Annual Volume for the Year’, C. Eyre & W. Strahan (Disbound), p. 970-972. 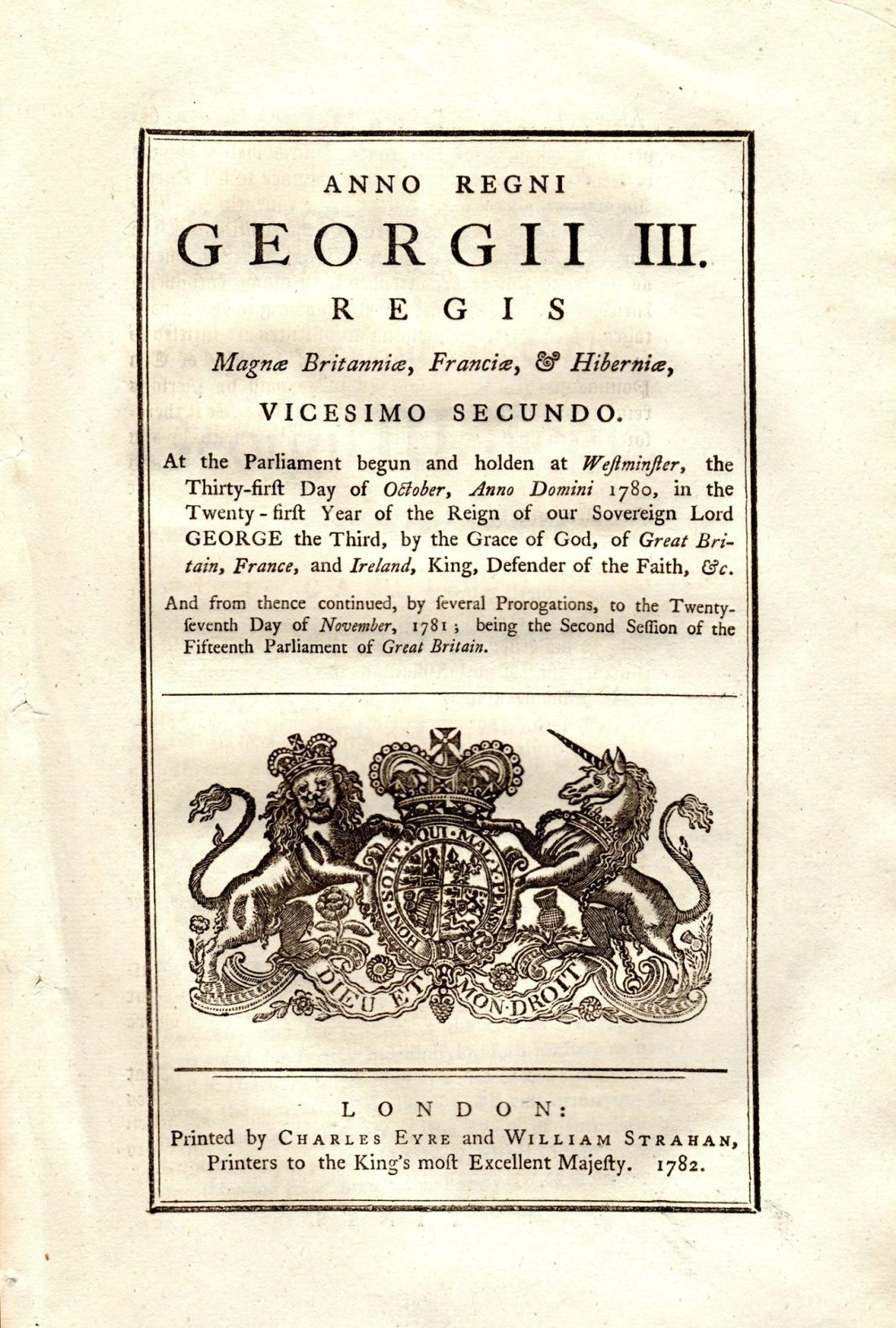 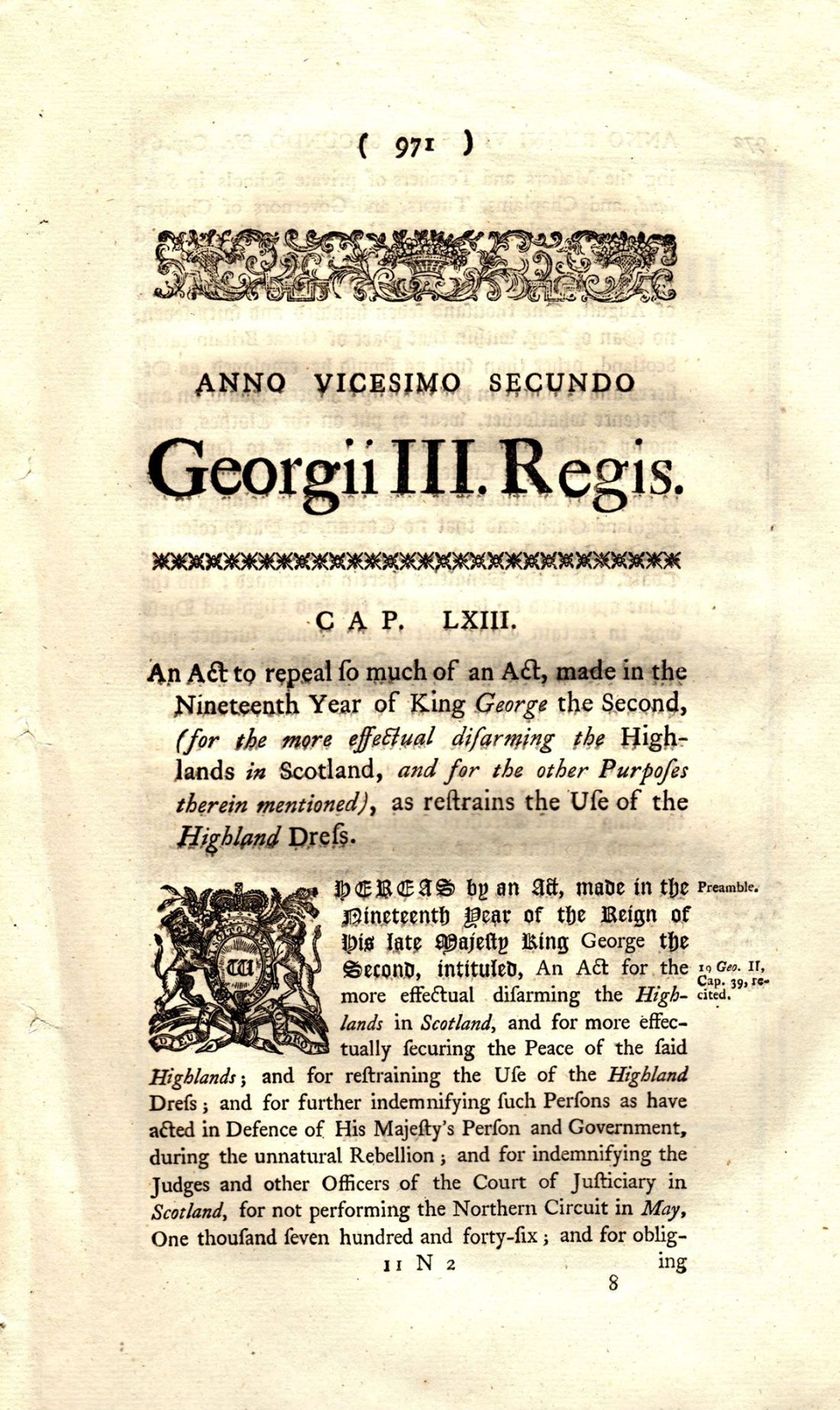