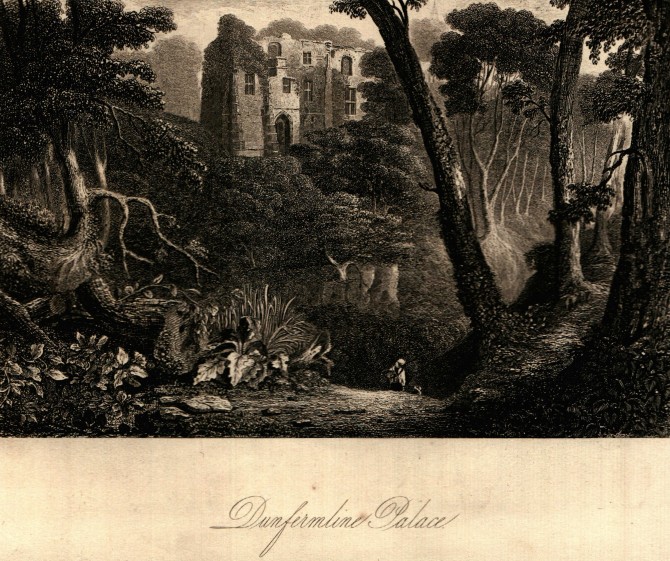 MALCOLM III., surnamed Cean-mhor or ‘Great-head,’ after his accession to the Crown, resided chiefly in the immediate neighbourhood of the modern town of Dunfermline, – and here he married Margaret, daughter of Edward, son of Edmund Ironside, king of England. Upon William the Conqueror ascending the English throne, Edgar, son of Edward, with his mother Agatha, and his two sisters, Margaret and Christian, retired into Scotland. Some authors say, that being on a voyage to Hungary, they were accidentally driven thither by a storm. The place in the frith where their ship anchored is a small bay, about a mile north-west of North Queensferry, near the present toll-bar, still called St. Margaret’s Hope. “The site of Malcolm’s tower,” says Mercer, in his ‘History of Dunfermline,’ “was strikingly adapted for a stronghold, and could not fail of attracting a rude engineer of the 11th century. Fordun says it was a place extremely strong by natural situation, and fortified by steep rocks; in the middle of which there was a pleasant level, likewise defended by rock and water, so that it might be imagined that the following words were descriptive of this place:- Nonhomini facilis, vix adeunda feris. ‘It is difficult to men; scarcely accessible by wild beats.’ The venusta planities, – or ‘pleasant level’ on which the tower was built, – forms the summit of a very steep eminence that rises abruptly out of the glen. The whole substructure of the glen on both sides is formed of freestone, which projects in many places from the surface; and these rugged declivities must have been clothed with thick impervious woods, rendering the summit extremely difficult of access on three sides. Round the base of the mount winds a rivulet, over which is a bridge leading to the mansion-house of Pittencrieff, which is situate on the farther bank, in a spacious park well-wooded, adorned with shrubberies, and having a splendid prospect to the south. The ground, too, is classical; for amidst this scenery, three centuries ago, when it was even more romantic than it is at present, must often have wandered the poet Henryson, holding sweet dalliance with the muses. There can be no doubt that here was the very ‘wod’ he so beautifully describes in the introduction to one of his fables:-

In a morning between mid-day and nycht,

I raiss and put all sluith and sleep on syde;

Ontill a wod I went allone, but gyd.

Of all pleasans that place was plenteous,

The mornyng mild my mirth was mair frothy.

The primrose and the purpure viola:

To heir it was a poynt of paradyss,

The blossoms blyth brak up on bank and bra;

The smell of herbis, and of foulis the cry,

Contending quha suid have the victory.’ “

In the 13th century this property belonged to William de Oberwell, who, in 1291, granted a right to the monks of Dunfermline of working coal for their own use in his lands. In 1632, Thomas, 3d Lord Bruce of Kinloss, afterwards Earl of Elgin, had a charter of the barony of Pittencrieff; and Sibbald informs us that in his time it was the property of a Mr. Forbes. About the middle of the last century it belonged to George Chalmers, Esq. It was afterwards purchased by the father of the present proprietor, Mr. Hunt.

After the accession of Alexander, our Scottish kings generally resided on the south side of the Forth; but they occasionally also resided at Dunfermline. At what precise date they gave up their residence in the old tower is not known; but at an early period a palace or castle appears to have been erected here, adjoining the monastery. and on the site of the present ruins of the palace. James IV., after his accession to the Crown, was more here than any of his immediate predecessors; and he appears to have either entirely rebuilt or greatly enlarged the palace, and added to its height, as in 1812 a stone was found in the roof of one of the windows, bearing the date of 1500. James V. and his daughter, Queen Mary, also resided here; and James VI., previous to his departure for England, appears often to have had his residence in the palace where Charles I. is said to have been born. In July, 1633, this unfortunate monarch visited Dunfermline, where he held a court, and created Sir Robert Kerr of Ancrum, ancestor of the Marquis of Lothian, Earl of Ancrum, and dubbed five gentlemen knights. In August, 1650, Charles II. remained several days in the palace, and here that monarch subscribed the national league and covenant, which was the last occasion of the palace receiving a royal visit. From this time it appears to have been entirely neglected, and in 1708 the roof fell in. It is now a complete ruin; all that remains being the south wall, shown in our engraving, and a sunk vaulted apartment traditionally called the King’s kitchen. The length of the palace seems to have been nearly 150 feet. The ruins were several years ago repaired, and put into a state in which they may still last for ages, by the proprietor of the estate of Pittencrieff on which they are situated.