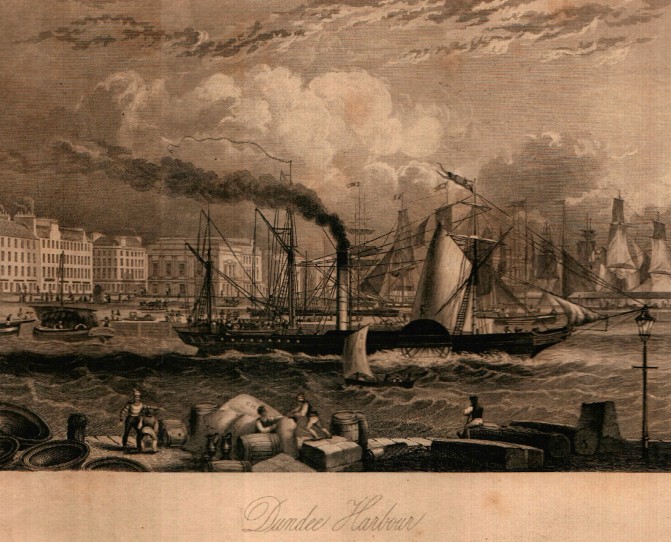 DUNDEE, a royal burgh, and an extensive sea-port, the fifth town of Scotland in point of population, and the first in the rapidity of recent increase in prosperity, is pleasantly situated on the north side of the estuary of the Tay, about 10 miles above Buddonness, at the embouchure of the river, It stands in 56° 27′ 33″ north latitude, and 3° 2′ 55″ longitude west from the meridian of Greenwich; and is distant twenty-two miles east from Perth, fourteen south from Forfar, and forty-two miles, by way of Cupar, from Edinburgh. It occupies chiefly a stripe of ground along the base of an acclivity, and seems pent up by Dundee-law and Balgay-hill as if they were a pursuing foe urging it into the sea; but though it has at both ends crept along the Tay, and sought to escape the pressure from behind, it has also begun to tread, in spacious streets, upon the lower acclivities in its rear. – The population, within the royalty, in 1841, was 59,135; inhabited houses, 13,204. Within the parliamentary boundaries, the population was 63,825; houses, 14,078.

While covering an extensive area, Dundee possesses little regularity of plan. Excepting the numerous new, but in general short streets, on the north, and most of the brief communications between the two great lines along the low ground, not even the trivial grace of straightness of street-line is displayed. Most of the old streets, too, are of irregular and varying width; and many of the alleys are inconveniently and orientally narrow. Yet the town makes up by a dash of the picturesque, by its displays of opulence, and by the life and bustle of its crowded quays, what it wants in the neat forms and elegant attractions of simple beauty. Its exterior, also, and its general grouping, and its richness of situation in the core of a brilliant landscape, eminently render it, as seen from the Fife side of the Tay, or from Broughty-ferry road, the justly lauded “Bonny Dundee” of song, and Ail-lec, “the pleasant” or “the beautiful” of Highland predilection. In a military point of view it is accessible on all sides, and is entirely commanded by the neighbouring heights, so as to be quite indefensible; but as regards commerce, comfort, and beauty, it is enriched by its singularly advantageous position on the Tay, and sheltered and adorned by the eminences among which it is cradled.

Several of the larger vessels belonging to companies are employed in whale-fishing. The vessels next in size trade to the Baltic, the West Indies, North and South America, and other foreign markets, for the manufactures of the town. Many vessels are employed by various shipping companies, in maintaining regular and frequent communication with London, Hull, Newcastle, Leith, Aberdeen, and Glasgow. Numerous small vessels also are employed in the coasting-trade, carrying lime and coals, and other bulky cargoes. But the most brilliant and stirring movements in the port are those of steam navigation. With the coast of Fife a communication is maintained hourly during a large portion of the day. Steam-boat communication, in a style combining speed with elegance, is also maintained daily with Newburgh and Perth, and in summer this communication is extended to Broughty-ferry, and Ferry-Port-on-Craig. An excellent steam navigation is maintained between Dundee and Leith. A powerful steam-vessel, the ill-fated ‘Forfarshire,’ plied to Hull, till she sank in the fearful catastrophe, which will long live in the recollection of thousands, associated with commendation of the philanthropic heroism of Grace Darling. Three splendid steam-ships, the latest built at an estimated cost of £23,000, maintain communication with London. The first and second, appropriately called ‘the Dundee’ and ‘the Perth,’ began to ply in 1834.