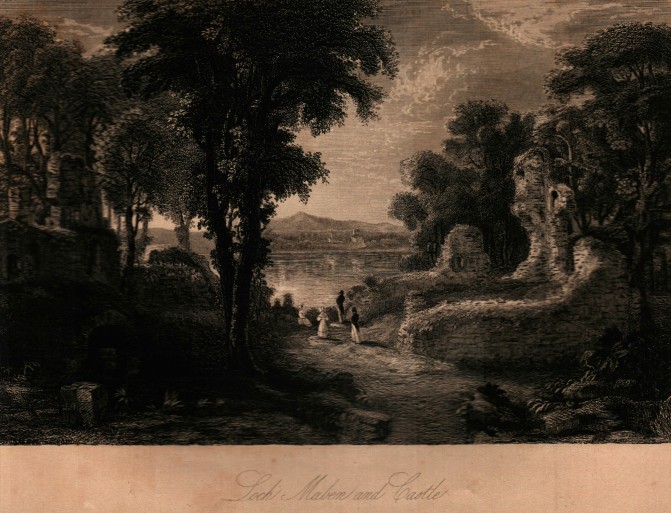 LOCH MABEN CASTLE stands a mile from the burgh of Lochmaben, on the extreme point of a heart-shaped peninsula which juts a considerable way into the south side of one of the eight lochs amidst which the burgh of Lochmaben is situated, – a piece of water measuring about two hundred acres in superficial extent, and known as the Castle-loch. Across the isthmus, at the entrance of the peninsula, are vestiges of a deep fosse which admitted at both ends the waters of the lake, and converted the site of the castle into an island, and over which a well-guarded drawbridge gave egress or refused it to the interior. Within this outer fosse, at brief intervals, are a second, a third, and a fourth, of similar character. The last stretched from side to side of the peninsula immediately at the entrance of the castle; it was protected in front by a strong arched wall or ledge, behind which a besieged force could shield themselves while they galled, at a distance, an approaching foe: and it had at the centre a drawbridge which led into the interior building, and which was probably the last post an enemy required to force in order to be master of the fortress. Two archways at the north-eastern and south-western angles of the building, through which the water of the fosse was received, remain entire. But no idea can now be formed of the original beauty or polish either of this outwork or of the stupendous and magnificent pile which it assisted to defend. Gothic hands began, generations ago, to treat the castle of the Bruce as merely a vulgar and convenient quarry; and for the sake of the stones, they have peeled away every foot of the ashler-work which lined the exterior and the interior of its walls!

The castle, with its outworks, originally covered about sixteen acres, and was the strongest fortress in the Border, and, till the invention of gunpowder, all but impregnable; but what remains can hardly suggest, even to fancy itself, the greatness of what the Goths have stolen. The enclosed spot around the castle is naturally barren, and fitted only for the raising of wood; and its present growth of trees, is allowed to bend their branches quietly over the ruin to the solemn music of the winds, would harmonize well with the solitude of fallen greatness. The view of the loch and of the circumjacent scenery, from all points in the vicinity, is calmly and impressively beautiful, and strongly disposes a reflecting mind to indulge in teeming and pleasingly tumultuous reminiscences of the past Tradition, though unsupported by documentary evidence, asserts the castle to have been not the original Lochmaben residence of the Bruces, but only a successor of enlarged dimensions, and augmented strength.