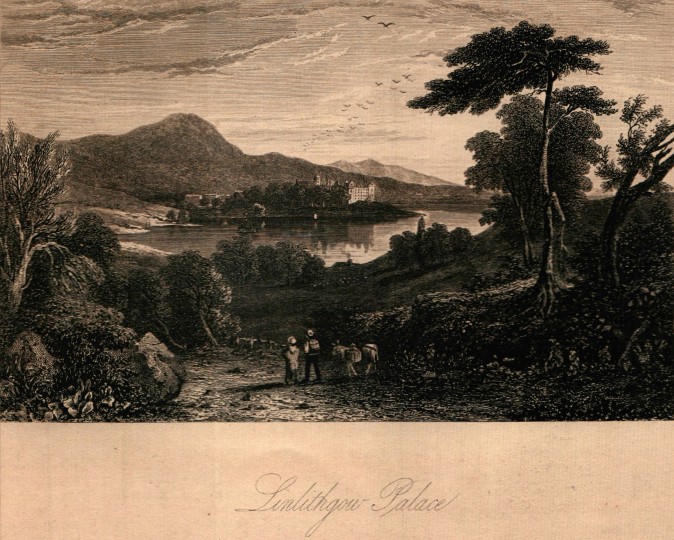 THE most remarkable object in the old burgh of Linlithgow is the magnificent ruin of its Palace, which now so forcibly arrests the attention of every traveller by railway betwixt Edinburgh and Glasgow. The eminence which bears it aloft advances almost into the middle of the loch, and, when viewed from the north, has the appearance of an amphitheatre, with a descent on the tree sides and terrace-walks on the west. The Palace occupies about an acre of ground, and though heavy in appearance from its almost total want of windows, and care-worn and haggard in aspect from the ruinousness of its condition, is still a picturesque and beautiful object; and something has of late years been done by the Barons of Exchequer to preserve it from further dilapidation. At the head of the avenue leading up to it from the street is a fortified gateway, formerly ornamented with the now scarcely traceable insignia of the knightly orders of the Garter and the Golden fleece, St. Michael and St. Andrew. On the east side, at the head of a sweeping avenue still lined with trees, stands the grand gateway, with the place for the portcullis, but in a neglected and obsolete condition. Over the interior is a niche in which formerly stood a statue of Pope Julius II., with the tiara, or triple crown; originally accompanied, it is said, by the statues of two cardinals in smaller niches, one on each side.

The Palace, which is built of polished stone, forms a large hollow quadrangle, generally five stories high, with towers at the corners. In the centre of the interior area or square was a fine well adorned with several statues, and so constructed as occasionally to form high and beautiful jets d’eau, but now a mass of confused ruin. On the east side, above the grand entrance, was the Parliament-hall, believed to have been commenced by James IV., and finished and decorated by his successor. Originally it was a splendid apartment, with a beautifully ornamented chimney at one end, and surmounting a magnificent piazza; but it is now a roofless, ragged, and despoliated ruin. On the south side was the chapel, supposed to have been built by James V. At the north-west angle is a small department, called the king’s dressing-closet, curiously ornamented, and looking out upon the lake. In one of the sides is a room 90 feet long, 30½ feet wide, and 33 feet high; having at one end a gallery with three arches. Many of the windows, and some of the doors, on the north, or most modern and magnificent side, have, with accompanying ornaments, the initials of the name of James VI., by whom it was erected shortly after his visit to Scotland in 1617, the pediments over the windows bearing the date of 1619. On the west or oldest side, where a tower or peel-house formed the nucleus of the whole palace, is shown the apartment in which Queen Mary was born. Narrow galleries run quite round this side, to preserve the communication with the apartments. In one of the vaults below, James III. found shelter from an attempt at assassination on the part of some of his rebellious subjects.

The site of the Palace was, at the dawn of authentic history, a Roman fort or station, and sent off a communication – intended apparently to serve both as a road and as a line of defence – to Antoninus’ wall, at a point in the parish of Falkirk nearly opposite Callendar-house. Edward I., according to Fordun, built a peel or castle on the spot in 1300, and spent here the Christmas of next year. On settling the kingdom and retired to England in 1305, he left it garrisoned under the charge of Peter Lubard. Two years afterwards it was taken and demolished by Bruce, aided by the curious device and successful stratagem of the peasant Binny or Binnock, the William Tell of Scotland. “Binny, who was known to the garrison, and had been employed in leading hay into the fort, communicated his design to a party of Scottish soldiers, whom he stationed in ambush near the gate. In his large wain he contrived to conceal eight armed men, covered with a load of hay, a servant drove the oxen, and Binny himself walked carelessly at his side. When the portcullis was raised, and the wain stood in the middle of the gateway, interposing a complete barrier to its descent, the driver cut the ropes which harnessed the oxen; upon which signal, the armed men suddenly leapt from the cart, the soldiers in ambush rushed in, and so complete was the surprise, that, with little resistance, the garrison were put to the sword, and the place taken.” The castle was doomed to perpetual ruin by the manly Bruce, who relied chiefly on the moral energy of his followers’ courage, and little on the appliances of physical strengths and fortifications; but it appears to have been rebuilt by the English during their brief possession of Scotland under the minority of David II., and seems afterwards to have been improved or renovated by David himself. A precept of David granted “the peel of Linlithgow” to John Cairns, and enjoined him to “build it for the king’s coming.” The place was now occasionally, but in a very subordinate manner, a royal residence. Though James I. but seldom occupied it, several of his coins bear the legend, “Villa de Linlithe.” In 1424, in common with the town and the nave of the church, it was destroyed by fire, and is called by the continuator of Fordun, in narrating the event, “the palace;” but whether it was slightly or ruinously injured is matter of debate, and who, in the supposition of its having been destroyed, was its re-edifier, is a fact not known to history. “The Palace” of the period was probably a mere tower, provided with vaults below, and comfortable apartments above, and only a degree larger or more dignified than the peel-houses of the Border; and by some it is thought still to exist, though in a very ruinous condition, in the core of the west side of the quadrangular edifice. James IV. preferred Linlithgow to all his other residences, and built the eastern side of the Palace. In the time of James V., who made large additions to it, his consort, Mary of Guise, on being conducted to it, said “she had never seen a more princely palace;” and she afterwards proved the sincerity of her compliment, as far at least as the palaces of Scotland were concerned, by preferring it to any other of the king’s residences, and spending in it a large part of her time. The pile, in its quadrangular and final form, was completed by James VI. Though, after the union of the crowns, it suffered from desertion; it continued to be habitable till January 1746. When the royal army was on its march, in pursuit of the Pretender’s forces, Hawley’s dragoons occupied the hall on the north side of the quadrangle, and, in the hurry of their departure, left some fires in a condition to ignite the building. Before the danger was discovered, the roof was mantled in flame; and, being covered with lead, it sent down such a shower of melted metal as entirely precluded any attempt to arrest the conflagration. Its vestiges of splendour and the beauty of its site, aided a little by imagination, still bring before the visiter’s view the princely pile so cheerily sung in the “Lay of the Last Minstrel:”

“Of all the palaces so fair

Built for the royal dwelling,

In Scotland, far beyond compare

And in its park, in jovial June,

How sweet the merry linnet’s tune,

How blythe the blackbird’s lay!

The coot dives merry on the lake, –

The sheet of water on the south-west border of which the Palace stands, covers about eighty acres. It was in former times frequented by wild swans, and these birds are still occasionally though rarely seen upon it. 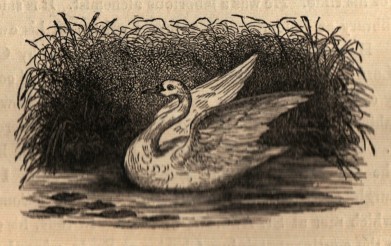