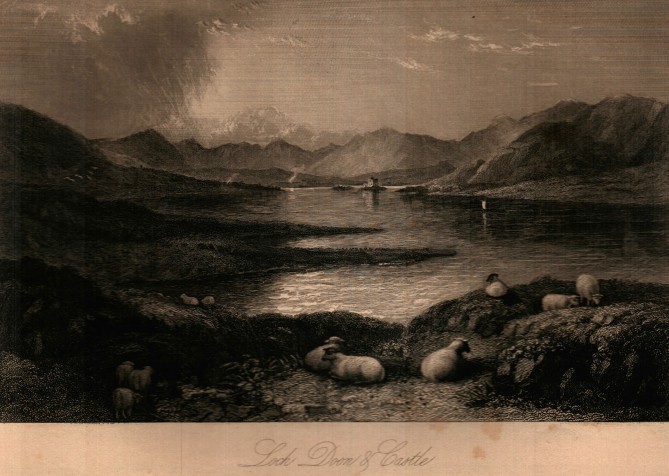 ABOUT twenty-two miles from the town of Ayr, and four from the village of Dalmellington, is Loch Doon, a sheet of water whence issues the water of Doon, whose ‘banks and braes’ have been rendered classic by the poetic pen of our Scottish bard; and near the margin of which his countrymen have reared a monument to his memory worthy of one of Scotland’s greatest sons. The loch is about eight miles in length, and from half-a-mile top three-quarters in breadth. Its form is nearly that of the letter L; the head of the lake corresponding with the top of the letter, and its lower extremity – where it discharges its waters – with the end of the horizontal line at the bottom. The shores of this lake are wild and solitary, and almost entirely devoted to sheep-pasture. The mountains which enclose it are in many places of considerable height, especially at the top of the lake, where they may be said to be lofty, and where their outline is varied and beautiful. These are the Star mountains, on the borders of the stewartry of Kirkcudbright, and from the base of which on this side, the Doon may be said to take its rise; while the Dee, which flows into the Solway frith, takes its rise on the opposite side.

The level of the waters of this lake has been considerably lowered from what it formerly was by the operations of the proprietors, and a portion of its bed laid dry. This – as in the case of Loch Leven in Kinross-shire – has lessened unquestionably the beauty of the scenery, by the exposure of tracts of barren sand and gravel, formerly covered with water; and – like the operations in Kinross-shire – has afforded no very useful result, so far as the ground on the shores of the lake is concerned. But, unlike those of Loch Leven, the operations on Loch Doon were not for the purpose of receiving ground; they had a more useful object in view, and have been attended with more beneficial results. Along the banks of the river Doon, there are some very extensive tracts of meadow-ground, which were, after heavy rains, liable to be overflowed by the accumulated waters from the lake. By perforating a bed of rock, over which the lake used to discharge itself, and forming tunnels, the usual level of its waters has been lowered; and, by erecting sluices, the proprietors are enabled to regulate the quantity of water which flows into the river, and thus to prevent the damage to the grounds upon its banks which used formerly to occur.

On a small island at the head of Loch Doon, are the ruins of an ancient castle: it is constructed of large square stones, and appears to have been a lofty tower of an octangular form. Of the history of this structure, or its origin, we have not been able to obtain any satisfactory account.* The island, however, which is nearest to the Carrick side of the lake, now belongs to the Earl of Cassilis. In the early part of the 13th century, the lands of Straiton – which are bounded by a part of the lake – were held by John de Carrick, a son of Duncan, Earl of Carrick. This baron was engaged, in 1235, in a rebellion of the Gallowaymen, and committed injuries on several churches within the diocese of Glasgow, which subsequently cost him a grant of part of his lands, and the patronage of the church of Straiton; but whether he or his successors had any connection with the castle on the island, we have been unable to ascertain. In 1823, several boats or canoes of great antiquity were found sunk in the lake near this island. They were all formed entirely from a single oak-tree hollowed out; and were shaped somewhat like a fishing-cobble. They are supposed to have lain in the water between 800 and 900 years.

After leaving the lake, the water of Doon flows for about a mile through a narrow gulley or ravine, the scenery of which is very remarkable. A lofty ridge of hills seems here to have been rent asunder to afford an exit to the waters of the lake; and the rocky walls which enclose this singular hollow, yet exhibit marks on either side of their former proximity. A walk has been constructed along the edge of the river, throughout the whole length of this ravine, by which an easy opportunity is given to strangers of viewing its romantic and picturesque scenery. On either hand, the rocks rise to a great height, almost perpendicular, but rugged and broken, and having their sides and their summits magnificently festooned and ornamented with a great variety of copse and trees. The scenery is all of a close character, but varied and interesting, changing with every turn of the walk; now presenting a rude vista of rock and wood, and again a mural precipice which seems to bar farther progress; while the effect of the whole is heightened by the music of the river rushing along its broken channel.

*  The only allusion I can find to this is in Balfour’s ‘Historical Works‘ in the chapter for David II. In the Companion option I wrote up for this book it mentions it as a “chief hold” that wasn’t obtained by the English in 1337:

“After the unfortunate battle of Halidon Hill, as I formerly said, the English get many of the chief holds and strengths of Scotland in their hands, except Dumbarton, kept by Sir Malcolm Fleming [Earl of Wigton]; Lochleven, kept by Sir Alan [de] Vipont; Kildrummy, kept by Christina Bruce; Urquhart, by Sir Thomas Lundin [Earl of Huntly]; [Loch Doon], or the Poeile, in East Lothian, kept by John Townes.”