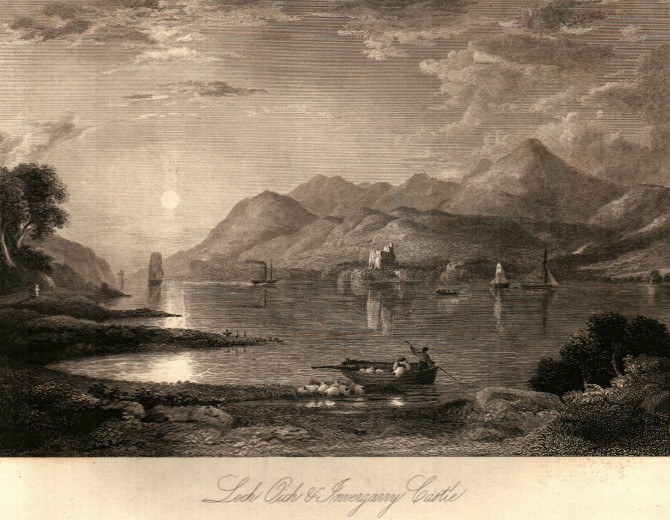 LOCH OICH, in Inverness-shire, forms the summit-level of the Caledonian canal, from which, as from a centre, it descends towards the eastern and the western seas. It is a small sheet of water, being not above four miles in length, nor more than a mile or a mile-and-a-half in breadth. The hills on the north side are rather tame in character; but the scenery on the south has considerable variety, and is among the finest on the line of the canal. Here, at the opening of Glengarry, where the water which gives name to the glen joins the lake, amidst lofty and beautiful woods overtopped by bold and majestic mountains, is situated the mansion-house of Invergarry, a very plain, narrow, high-roofed building, the principal residence of the late Macdonald of Glengarry, the chieftain of a considerable branch of that powerful sept; by many held to have been the head of the clan; by all looked upon as the last genuine specimen of a Highland chief. In him the spirit of clanship was as strong as ever warmed the heart of a Highlander; and within the dwelling of Glengarry, the last remains of ancient manners and institutions found a refuge from the influence of modern feelings and modern innovations. The ruins of the castle of Invergarry are in the immediate neighbourhood. They consist of an oblong square of five stories, of which only a portion of the exterior walls is now standing. They are seen in our engraving, on the opposite shore of the loch, near the centre of the middle distance. The high conical shaped mountain is Bentee. The Oich conveys the superfluent waters of Loch Oich, north-eastward, but in the line of the segment of a circle, with the concavity facing the south-east to the head of Loch Ness. At its head stands the bare slated house of Aberchalder, where Prince Charles Edward concentrated his forces before commencing his march toward the low country. The part of the glen which the Oich traverses is occupied by low, rocky, and heath-clad hills; and brings down. on the left bank of the river, the public road, and, on the right bank, the Caledonian canal.