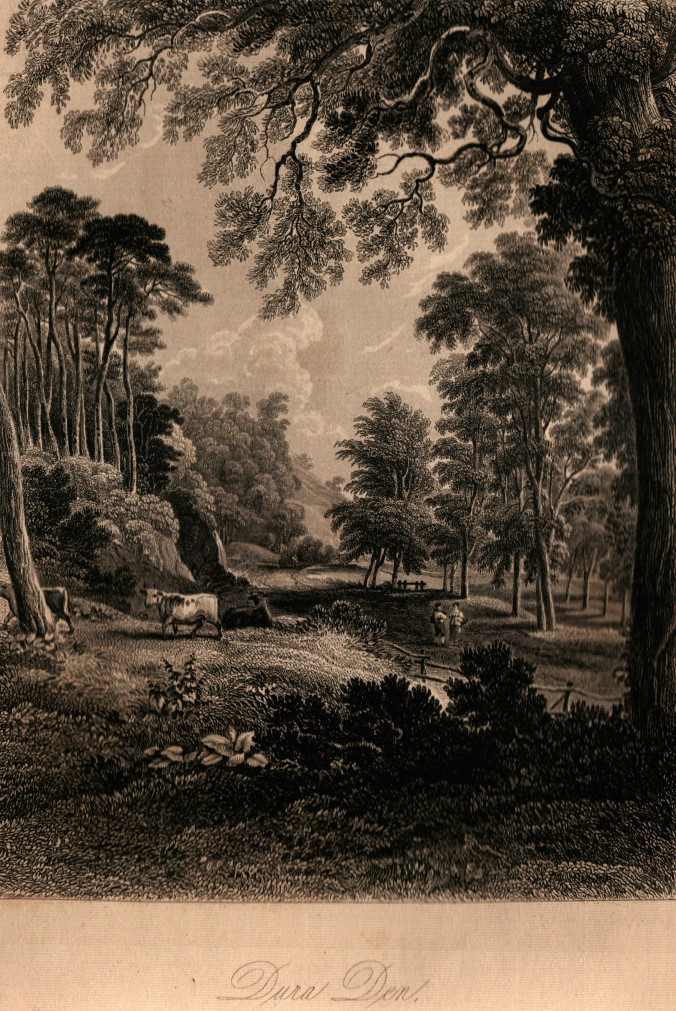 DURA Den is a beautiful little winding glen in the parish of Kemback in Fifeshire, through which Ceres burn flows to join the Eden at Dairsie church. The yellow sandstone forms an interesting geological feature in this district, and, from recent discoveries which have been made in it of organic fossil remains, will probably furnish matter of deep speculation to the theoretic geologist. It occupies the valley of Stratheden in the district of which Cupar forms the centre, and thence rises to the height of five or six hundred feet, on the ridge of hills which skirt the valley on the south. It also ascends considerably on the northern slope, but is there more broken and disturbed by masses of trap which prevail in that quarter. Some of the beds have a coarse texture, like millstone grit, and occasionally pass into a conglomerate; but more usually they are of a finer texture, having thick hard beds which are extensively used in building. Subordinate to these are thin, micaceous, flaggy beds, which pass into a kind of shale or marl, some of which are red, others green or variegated. In Drumdryan and Dura the whole deposit appears to be a kind of granular aggregate of silex, with an argillaceous basis of a yellowish colour, and of considerable but variable hardness. At Dura the red marl beds are about four feet thick, numerous and well-defined. Some very interesting appearances and sections of the yellow sandstone, along with strata of the coal-field, may be observed in Dura Den.

No lover of the picturesque, when he stands by the ruins of the castle, in the immediate vicinity of the ancient church of Dairsie, – the former famed in Scottish history during the contending claims of Bruce and Baliol, and the latter intimately connected with the celebrated Archbishop Spottiswoode, – can fail to be delighted with the prospect before him. It is a picture in itself of the most pleasing and enchanting variety. But here the geologist also, whether he looks to the east or to the west, in his walk through the valley, will be struck with the forms and interesting appearances around him. The nature of the materials, – their position and relation to each other, – their inclination, dip, dislocation, and disturbance through the agency of the igneous rocks which here occur in mass as well as in veins of greenstone – are all calculated to arrest his attention, and to furnish him with striking examples of some of the most interesting points in geology. We have here the alternating beds of sandstone, clay, and shale, which occur in the lower parts of the coal-formation, and which are repeated, in some instances, nearly an hundred times. A disturbing vein of greeenstone trap occurs about the middle of the valley, and the effects of its intrusion among the stratified beds are discernible in their inclination. On the north of the vein they dip to the south-west at an angle of 26°, immediately on the south a bed of sandstone is tossed into a vertical position; the beds from this point resume a more natural position, dipping at an angle of only six or eight degrees to the north-west. The induration produced by contact with the trap rocks is also strikingly displayed here, the fused material resting immediately upon the sedimentary deposit. Higher up the ravine, other members of the coal-formation may be observed cropping out on the west side of the rivulet, and lying nearly in a horizontal position.

At Dura quarry, in excavating a water-course for a new mill, several entire fossil fishes have been exhumed from their slumber of ages. Externally these creatures have undergone but little change in their form, colour, or scaly covering; being still as perfect in their organic structure, even to the minute silken fin, as when they sported in the waters of a distant primeval age; the substance of the body, however, and every trace or vestige of internal organization, have entirely disappeared, and the material of the rock has been substituted in their place, – the enamel of the scales being less soluble than the more calcareous material of which the bones are composed. In addition to these, another class of most interesting fossil-relics has been detected in the Dura sandstone. These obviously belong to the insect-race, of the coleopterous order, and resemble in many particulars the family of Curculionidæ, of which the diamond beetle is an example of the existing race, but of the most insignificant dimensions as compared with the Dura fossils. They are extremely abundant in this deposit. “It is very interesting and important, to have discovered in the coal-formation,” says Buckland, “fossil-remains, which establish the existence of the great insectivorous class Arachnidans, at this early period. It is no less important to have found also in the same formation the remains of insects, which may have formed their prey. Had neither of these discoveries been made, the abundance of land plants would have implied the probable abundance of insects, and this probability would have involved also that of the contemporaneous existence of Arachnidans, to control their undue increase. All these probabilities are now reduced to certainty, and we are thus enabled to fill up what has hitherto appeared a blank in the history of animal life, from those very distant times when the Carboniferous strata were deposited. The estuary, or fresh-water formation of those strata of the carboniferous series which contain shells of Unio, in Coalbrook dale, and in other coal-basins, renders the presence of insects and Arachnidans in such strata, easy of explanation; they may have been drifted from adjacent lands, by the same torrents that transported the terrestrial vegetables which have produced the beds of coal.” Specimens of five or six genera of fossil-fishes have been found in the Dura sandstone.