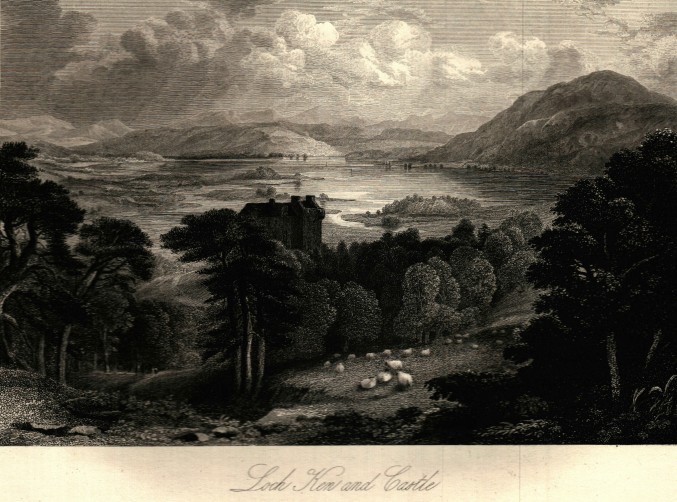 LOCH KEN lies in the stewartry of Kirkcudbright, within three miles of the burgh of New Galloway, and about twenty-five miles from Dumfries. It is fourteen miles in length, and a mile broad near the top, but decreasing in breadth towards its lower extremity. It may be considered as merely an expansion of the river Ken, which, rising in the northern part of the stewartry, and draining the several parishes of Corsefairn, Dalry, Balmaclellan, and Kells – generally called the Glen Kens, or the district of Glen Ken – forms itself into this lake. We have said that this lake is fourteen miles in length, but that extent is, properly speaking, occupied by two lakes, having an interval between them connected by the river.

The Glen Kens, or the district through which the river Ken flows, and the head of the lake, exhibit some of the finest scenery in this vicinity. The mountains, which enclose the glen, and that portion of the lake which adjoins Kenmure, are lofty, and present a varied and interesting outline. A natural forest at one period occupied this glen, called the forest of Kenns; and considerable remains of natural wood are still to be found in various parts on the banks of the river, and its tributary streams. From New Galloway, all the way up the glen, the scenery is delightful, and as the road rises along the edge of the hills the whole of this beautiful glen, with its river, and beyond it the extensive lake, form a very splendid view. But it is in the neighbourhood of Kenmure castle, situated near the head of the lake, and within three miles of the burgh of New Galloway, that the lover of beautiful scenery will longest pause and with greatest pleasure. The higher grounds here are finely wooded, while the lower grounds are either lying in pasture, or waving with the produce of the labours of the husbandman. In approaching the lake from New Galloway, the road is on both sides overhung with trees from amid the shade of which the visitor sometimes obtains peeps of the lake, sometimes of the river, and the meadow-land along its banks, and at other times of the lofty and ancient Castle of Kenmure: every step gives a new foreground, or a new distance to the picture.

Kenmure castle, or as it was anciently called, the Place of the Kenns, is an object of great interest in every view of the upper portion of the lake. It is obviously of great antiquity, and has long been the residence of the Gordons of Kenmure and Lochinvar. It has been well-preserved, and still forms the residence of Viscount Kenmure. In 1633, this ancient branch of the family of Gordon was ennobled in the person of Sir John Gordon of Lochinvar, created Viscount Kenmure, Loch Lochinvar. This title was attainted in 1715, but restored by George IV. in the person of the then aged and highly valued representative of the family.

The situation of this castle is very singular. It occupies nearly the entire summit of a circular mound of considerable height, which, from its singular form, and standing quite isolated on a plain at the head of the lake, has much the appearance of an artificial tumulus. Its sloping surface is covered with verdant turf, but the appearance of the natural rock in one or two places dissipates the idea of its being artificially constructed. The pathway leading to the summit of the mound winds round it like a screw; so that, in ascending to the castle, the visitor passes round it more than once before he reaches the small gravel platform in front of the entrance. This ancient structure, which is of great height, independent of the mound on which it is elevated, consists of two buildings standing at right angles to each other, and having the entrance at the corner where they join. Like other buildings of the olden time, it is ornamented with towers and turrets at its various ends and corners. The grounds around it associate with its ancient form: the garden still preserving, with its lofty beech hedges, much of the old style of gardening, and the old patrician trees, which flank and overshadow the approach, forming a magnificent entrance to this venerable relic of the feudal ages.

The present view of Loch Ken is taken from a height above Kenmure, looking south-west. In the foreground is the castle, with the lake, at the extremity of which is a small island called the Green Isle. To the right, in the extreme distance, are seen the summits of the mountains of Cumberland. On the left is a mountain called Benan; and on the left of the central distance, the conical summit of Bengairn.