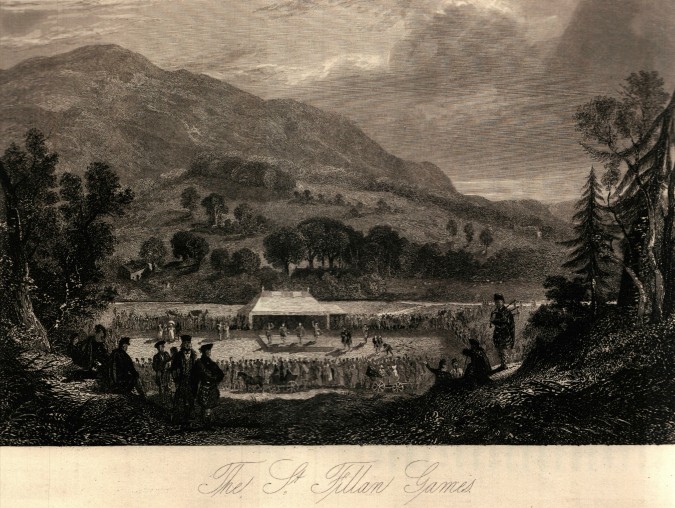 THE village of St. Fillan’s is of recent origin. It is situated at the east end of Loch-Earn, on the north side of the road leading from Perth into the West Highlands, through Strathearn, by Crieff, Comrie, and Lochearnhead; and is distant from Comrie five-and-a-half miles, and from Lochearnhead seven miles. It consists of a single row of houses, extending in the form of an irregular semicircle, from the inn at the lower extremity of the lake, partly along the lake side on the one hand, and partly along the river which, issuing from it, gives name to the strath, on the other. There is an air of comfort about it that is quite pleasing. Most of the houses are slated, and a few of them – at ‘the west end’ – are two stories in height. Each cottage has on either side of the door a narrow strip of ground enclosed with a rustic timber-railing, and planted with flowers and shrubs; while ivy, honeysuckle, and other creepers, have been neatly trained over the fronts and roofs.

The St. Fillan’s Highland Society, instituted in 1819, is, or rather was, an association of the gentlemen of the west of Perthshire, who held an annual meeting at St. Fillan’s, about the latter end of August, for the encouragement and exhibition of Highland games and costume. On these occasions, a large square stage was erected on a level piece of haugh on the south side of the river, opposite the village, to which there is access by a timber bridge. Part of the ground surrounding this platform was railed in, and furnished with seats and awnings for the accommodation of the judges and visitors of rank. Behind these, a clear space was allowed as a promenade for the members of the society; and beyond the outer barriers, the mixed multitude of spectators found a convenient station on a semicircular sloping bank, from which they could easily see and hear the performances. On the opposite side of the ground, or that next the river, the carriages and other vehicles of the members were drawn up; and the whole being thus arranged in amphitheatrical order, and with a somewhat classical effect, the games were usually opened with a competition among the pibroch performers, for a handsomely mounted Highland bagpipe. After this and some other minor prizes had been awarded, the competitors in reel and hornpipe dancing, and the ancient sword-dance claimed attention; afterwards followed putting the stone, – flinging the hammer, – leaping, – running, – wrestling, – target-shooting, – boat-rowing, – and a variety of other manly and athletic exercises. Prizes were also awarded for the best exhibitions of full Highland costume. The amusements of the day terminated, the members of the association dined together in their hall, – a commodious building, capable of accommodating 140 guests, now the village-hostelry. We are not aware that the St. Fillan’s society has had any gatherings of late years.

Immediately above the arena on which the games were held, towers an isolated rocky eminence, known as Dunfillan or St. Fillan’s hill. On the south and east it is inaccessible; but it can be easily enough ascended on the north and west. St. Fillan – whose name has been given to so many chapels, wells, and other monastic relics in Scotland – is supposed to have flourished in the 7th century. He is said to have filled the office of abbot at Pittenweem in Fifeshire, before he addressed himself to the work of an evangelist in the wilds of Breadalbane, where he died in the odour of sanctity, and amidst his affectionate converts, in A.D. 649. The saint had erected three chapels in this district, one at Strathfillan, another at Killin, and a third at Dundurn, in the immediate vicinity of the present village of St. Fillan’s. He died at the last-mentioned place; but it would appear that the people of Strathfillan and Killin each thought themselves possessed of a better claim to the saint’s relics than those of Dundurn, and accordingly proceeded to transport the body through Glenogle, with all decent and devout ceremony. On arriving, however, at a point about two miles from Killin, where the road branches-off to Strathfillan, the funeral train – as might have been expected – became divided in their sentiments as to which road they should pursue, and from words speedily came to blows: when lo! as the strife waxed warmer, and swords had been drawn, and blood began to flow, it was discovered that two coffins exactly similar in appearance were before them; upon which each part seized one, and it remains a question to this day, whether Strathfillan, or Killin, possess the true and undoubted relics of the Patron saint of Breadalbane.*

Of the old chapel or oratory of the saint at Dundurn, nothing now remains but a circular stone-font, which may still be seen in the window of the present chapel. A rude stone on the top of Dunfillan has been designated St. Fillan’s chair; and a spring of water at the foot, known as St. Fillan’s well, was long resorted to for its healing virtues.