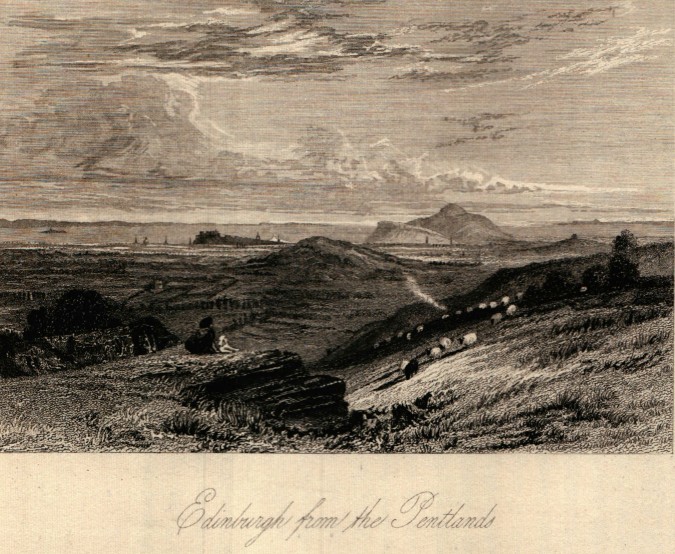 THIS view is chiefly interesting as affording a faithful idea of the pasture land in the vicinity of Edinburgh, and also as opening up a wide prospect of the principal features which go to complete the fine panoramic view which almost every point of eminence in the vicinity of Edinburgh commands. The hills which on all sides encompass the city, add greatly to its picturesque appearance, their Titanic brows looming sternly against the horizon, as if they themselves were mutely contemplating the scene, and furnishing him, “in guerdon for his toil,” who has reached their proud summits, with a telescopic power of observation, taking in almost at a glance all the fair objects with which the surrounding expanse of “land, and sea, and sky,” is so profusely adorned. We know of few excursions more pleasing than a ramble about the Pentlands, and the staid citizen who can escape for a day from the labyrinth of his “affairs,” would find such a trip highly delightful, if not from associations connected with the beautiful or romantic, at least as reminding him that the breezes on his native hills are salubrious as heretofore, and wanton as freely about their summits as in days of yore,

When Bruce’s pennon streamed upon their breast.