Field-Marshal George Wade died at the age of eighty, possessed of above £100,000. In the course of a military life of fifty-eight years, his most remarkable, though not his highest service was the command of the forces in Scotland in 1724, and subsequent years, during which he superintended the construction of those roads which led to the gradual civilization of the Highlands.

‘Had you seen those roads before they were made,

You’d have lifted up your hands and blessed General Wade.’

sung an Irish ensign in quarters at Fort William, referring in reality to the tracks which had previously existed on the same lines, and which are roads in all respects but that of being made, i.e. regularly constructed; and, doubtless, it was a work for which the general deserved infinite benedictions. Wade had also much to do in counteracting and doing away with the Jacobite predilections of the Highland clans; in which kind of business it is admitted that he acted a humane and liberal part. He did not so much force, as reason the people out of their prejudices.

The general commenced his Highland roads in 1726, employing five hundred soldiers in the work, at sixpence a-day of extra pay, and it was well advanced in the three ensuing years. He himself employed, in his surveys, an English coach, which was everywhere, even at Inverness, the first vehicle of the kind ever seen; and great was the wonder which it excited among the people, who invariably took off their bonnets to the driver, as supposing him the greatest personage connected with it. When the men had any extra hard work, the general slaughtered an ox and gave them a feast, with something liquid wherewith to drink the king’s health. On completing the great line by Drumuachter, in September 1729, he held high festival with his highwaymen, as he called them, at a spot near Dalnaspidal, opposite the opening of Loch Garry, along with a number of officers and gentlemen, six oxen and four ankers of brandy being consumed on the occasion.1

Walpole relates that General Wade was at a low gaming house, and had a very fine snuff-box, which on a sudden he missed. Everybody denied having taken it, and he insisted on searching the company. He did; there remained only one man who stood behind him, and refused to be searched unless the general would go into another room alone with him. There the man told him that he was born a gentleman, was reduced, and lived by what little bets he could pick up there, and by fragments which the waiters sometimes gave him. ‘At this moment I have half a fowl in my pocket. I was afraid of being exposed. Here it is! Now, sir, you may search me.’ Wade was so affected, that he gave the man a hundred pounds; and ‘immediately the genius of generosity, whose province is almost a sinecure, was very glad of the opportunity of making him find his own snuff-box, or another very like it, in his own pocket again.’

THE GREYBEARD, OR BELLARMINE.

The manufacture of a coarse strong pottery, known as ‘stoneware,’ from its power of withstanding fracture and endurance of heat, originated in the Low Countries in the early part of the sixteenth century. The people of Holland particularly excelled in the trade, and the productions of the town of Delft were known all over Christendom. During the religious feuds which raged so horribly in Holland, the Protestant party originated a design for a drinking jug, in ridicule of their great opponent, the famed Cardinal Bellarmine, who had been sent into the Low Countries to oppose in person, and by his pen, the progress of the Reformed Religion. He is described as ‘short and hard-featured,’ and thus he was typified in the corpulent beer-jug here delineated. To make the resemblance greater, the Cardinal’s face, with the great square-cut beard then peculiar to ecclesiastics, and termed ‘the cathedral beard,’ was placed in front of the jug, which was 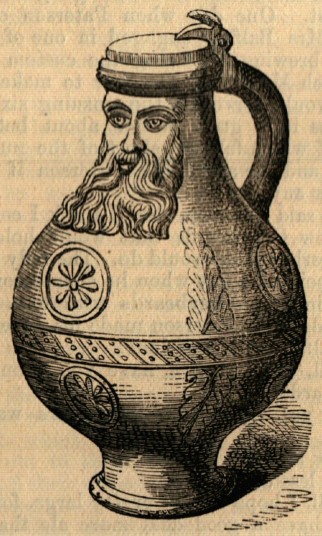 as often called ‘a greybeard’ as it was ‘a Bellarmine.’ It was so popular as to be manufactured by thousands, in all sizes and qualities of cheapness; sometimes the face was delineated in the rudest and fiercest style.

The term Greybeard is still applied in Scotland to this kind of stoneware jug, though the face of Bellarmine no longer adorns it. A story connected with Greybeards was taken down a few years ago from the conversation of a venerable prelate of the Scottish Episcopal church; and though it has appeared before in a popular publication, we yield to the temptation of bringing it before the readers of the BOOK OF DAYS:

About 1770, there flourished a Mrs Balfour of Denbog, in the county of Fife. The nearest neighbour of Denbog was a Mr David Paterson, who had the character of being a good deal of a humorist. One day when Paterson called, he found Mrs Balfour engaged in one of her half-yearly brewings, it being the custom in those days each March and October to make as much ale as would serve for the ensuing six months. She was in a great pother about bottles, her stock of which fell far short of the number required, and she asked Mr Paterson if he could lend her any.

‘No,’ said Paterson, ‘but I think I could bring you a few Greybeards that would hold a good deal; perhaps that would do.’ The lady assented, and appointed a day when he should come again, and bring his Greybeards with him. On the proper day, Mr Paterson made his appearance in Mrs Balfour’s little parlour.

‘Well, Mr Paterson, have you brought your Greybeards?’

‘Oh yes. They’re down stairs waiting for you.’

‘Well, I hope they’re pretty large, for really I find I have a good deal more ale than I have bottles for.’

‘Oh, that will do extremely well.’

Down goes the lady.

‘I left them in the dining-room,’ said Paterson.

When the lady went in, she found ten of the most bibulous old lairds of the north of Fife. She at once perceived the joke, and entered into it. After a hearty laugh had gone round, she said she thought it would be as well to have dinner before filling the greybeards; and it was accordingly arranged that the gentlemen should take a ramble, and come in to dinner at two o’clock.

The extra ale is understood to have been duly disposed of.

Among the soldiers of Randolph was one named William Frank, who volunteered to lead an escalade up a steep and intricate way by which he had been accustomed in former years to visit a girl in the city of whom he was enamoured. Frequent use had made him familiar with the perilous ascent, and it was made on the night of the 14th of March [1313] – which proved dark and stormy – at the most difficult part of those precipitous bluffs which overhang the Princes’ Street Gardens, where a fragment of ruin, named Wallace’s Cradle, is still visible. Under his guidance, with only thirty resolute men, Randolph scaled the walls at midnight, and, after a fierce resistance, the garrison was overpowered. There are indications that some secret pathway, known to the Scottish garrison, existed, for during some operations in 1821 traces were found of steps cut in the rock, about seventy feet above the fragment named “Wallace’s Cradle” – a path supposed to have been completed by a movable ladder.

On the 14th day of March [1313,] Edinburgh castle was taken by Thomas Randolph, Earl of Moray, the King’s nephew, and the English garrison [were] put to the sword; as the old rhymes of Magnus, the friar, can bear record.

March is the month, recall that Moray

Prepares, and in the night, Christ accompanied,

Maiden castle, although English is not bitter.

This was the fourteenth of the light complete

For Scots: please return by glory of Christ.

The alliances of this princely person were as high as Scotland afforded. His first wife (beside whom he desired to be buried in the Abbey of Newbattle) was Agnes, a daughter of the house of Dunbar; and it is doubtful if he thought he married more nobly when he took for his second, the Lady Giles Stuart, the sister of King Robert II. His eldest son he married to Elizabeth Stuart, the third daughter of Robert III. It may serve to show how little mere titles of honour were as yet coveted in Scotland, that this family, so great in wealth and connexions, did not receive the dignity of Earl, till James, his great-grandson, having married Johan, the third daughter of King James I., was created Earl of Morton, in Parliament, 14th March 1457.1

Mar. 14 [1600.] – The king, returning from a General Assembly in Edinburgh to his palace of Falkland, crossed the Firth of Forth by the ferry between Leith and Kirkcaldy. The weather was fair at starting, but became foul on the passage, and the mariners were obliged to run their boat upon the sands at Kirkcaldy, where the king was taken out on horseback. ‘He exclaimed with execration, that he was ever in danger of his life in going to those assemblies.’ – Cal.

In the careful fashion of that age, an account was kept of the boy’s expenses, from which I cannot resist giving a few extracts.

COMPT of MONEYIS debursit for clothes and utheris necessaris to my Lord of Lorne’s sone, beginnand the 26 of September 1633:-

Mair, for his expenssis going to Perthe to visite his father the Erle of Argyle the 14 Marche being thrie nychtis thair,

Snow had begun at Christmas 1664, and it lay upon the ground till the 14th of March [1665] – a storm of which the like had not been seen for many years before. – Nic. ‘Some began to say there would hardly be any seed-time at all this year; but it pleased the Lord, out of His gracious goodness, on a sudden to send seasonable weather for the seed-time, so that in many places the oat seed was sooner done this year [than] in many years formerly; for the long frost made the ground very free, and the husbandmen, for the most part, affirmed they never saw the ground easier to labour.’ Many sheep perished during the storm, and the frost was severe enough to kill the broom and whins in many places. – Lam.

2626. Letter from Earl Crawfurd to Provost Cochrane stating he will carry out whatever the Duke of Cumberland resolves upon. Perth, March 14, 1746.

“Betty was brought to bed on Sunday the eighth current.”

Before this letter reached its destination, the troops under General St. Clair, which had wintered at Cork, had been ordered home; and Dr. Clephane, through the unsolicited attention of Lord Sandwich, was almost immediately appointed one of the Physicians to the Hospital of the British Troops in Flanders, where “camp fever” and “marsh fever” were cutting down the strength of the army more than the guns of Bergen-op-zoom.

In 1722 [the surgeons and apothecaries] ceased to have all connection with the barbers, save that the latter were obliged to enter all their apprentices in a register kept by the surgeons. By a charter of George III., dated 14th March, 1778, the corporation was erected into “The Royal College of Surgeons of the City of Edinburgh,” a document which established a scheme of provision for the widows and children of members.

One thought on “14th of March”