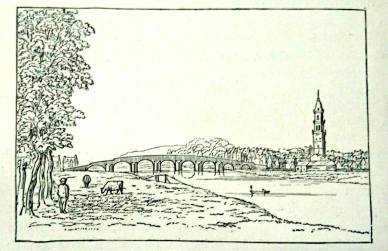 The view of the old bridge [here] represents it as shewn in an engraving published by Foulis in 1761, and reproduced in Dr. Macgeorge’s Old Glasgow, published by Messrs. Blackie & Son in 1880. The view is from the south side of the river, and takes in the spire of the Old Merchant Hall in Guildry Court.

At the bridge thus referred to, which is said to have been only twelve feet wide, and till altered in 1776 had a very steep ascent to its centre, custom dues were levied, but the amount drawn was evidently insufficient for its maintenance or was otherwise applied, for on 8th April, 1571, a deed of gift was obtained from James VI. and the Regent Lennox, and in it the importance of the bridge and the necessity for having it repaired are set forth. “Considering,” it says, “na thing within our said citie sae precious nor necessar, bayth for the weill of the inhabitantes thairof, decoratioun of the same and common weill of the haill cuntre as the Brig of Glasgow, ower Clyde, quhilk throw the oft inundationis, greit fludis and stormis that has occurit and discendit doun the watter in tyme of frost, and specialie this last winter, the said brig hes bene sa troublit, dung down and dampnageit with greit trowpis of yis,1 that gif the samyn be not spedelie redressit and ordourit to the formar estait with small tyme, is sall grow to sic poynt as finallie greitar inconvenient sall follow to the disproffeit of our haill realme.” It therefore authorised the magistrates to uplift, during the pleasure of the Sovereign, a tax upon all herring or other fish brought to the bridge and transported therefrom, and to employ the monies so raised in executing the necessary repairs.2

Arthur Colquhoun is arraigned before the presbytery “for the cruelle murther of wmqll James Pincartoun his brothers son quha had not affendit him.” He is ordained “to underlye ye censure of ye kirk for ye saming,” and subsequently he is excommunicated.1

I will venture to give the historian’s account of the next baron and his wife, his own grandfather and grandmother. He has now the advantage of speaking as an eye-witness:-

“This William Rose of Kilravock was a good and inoffensive man, a lover of peace, one that desired to trouble none, though he was troubled by others. That one trouble with the name of Dunbar, included manie troubles, though he was no ways accessorie to the illegalities of some of his kinsmen which procured it; yet as to that and anie other troubles, he was patiendo victor, God carying him out, though in the way of suffering. He was low of stature; his hair and beard betwext red and yellow, and himself of a fair complexion. Sitting in his chair within the hall of Kilravock, he was taken with ane apoplexie, and after  ane years languishing, died in peace, Aprile 8, 1611, aged 66 years. having survived his father but fourteen years, and lived after his mariage 40 years, or thereby.”

Apr. 8 [1685]. – The Duke of Queensberry, the Earl of Perth, and the Archbishop of St Andrews, arrived in Edinburgh from London, ‘having been only eight days by the way.’ – Foun.

“SOCIETY OF ANTIQUARIES OF SCOTLAND (8th April [1895]). – In the first paper the Earl of Southesk gave notice of the stone with an Ogham (?) inscription recently found in digging a grave in the churchyard of Abernethy, Perthshire. [See p. 115, antea.] A few days after its discovery the stone was sent for inspection to the Museum of Antiquities, Edinburgh, where, owing to peculiarities discussed at length in the present paper, doubts arose as to the character of its inscriptions, which, if not fictitious, appeared to have been recently tampered with. It was subsequently sent by Rev. Mr. Butler to the author of the paper, who, after the most ample opportunities of scrutiny of the stone and study of its inscriptions, felt himself still unable to arrive at any certain conclusions.

One thought on “8th of April”