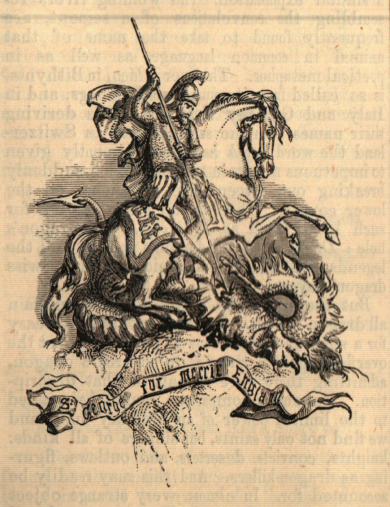 If Gibbon’s sketch of St George’s career be correct, that martial hero owes his position in the Christian calendar to no merit of his own. Born in a fuller’s shop in Epiphania, Cilicia, he contrived to ingratiate himself with those above him by servilely flattering them, and so gradually rose from his original obscurity. A lucrative contract for supplying the army with bacon, proved, under his unscrupulous management, a mine of wealth; but as soon as he had made his fortune, he was compelled to fly the country, to escape the consequences of the discovery of his dishonest practices. He afterwards became a zealous convert to Arianism, and made himself so conspicuous in his new vocation, that he was sent by Constantius to supersede Athanasius in the archbishopric of Alexandria. To satisfy his avarice, the pagan temples were plundered, and the pagan and Christian inhabitants taxed, till the oppression became unendurable. The people rose and expelled the ex-contractor, but he was quickly reinstated by the army of Constantius. The accession of Julian was the signal for retribution. George and two of his most obnoxious adherents were dragged to prison by the exultant Alexandrians, where they lay for twenty-four days, when the impatience of the people refused to wait longer for revenge. The prison doors were broken open, the archbishop and his friends murdered, and their bodies, after being carried through the city in triumph, thrown into the sea. This death at the hands of the pagans made the tyrant a martyr in the eyes of the Arians, and canonization followed as a matter of course.

In all the wide domain of the mythical and marvellous, no legends occur so frequently, or in so many various forms, as those which describe a monstrous winged serpent, or dragon, devouring men, women, and children, till arrested by the miraculous valour or saintly piety of some hero. In nearly all of these legends, a maiden, as the special victim of the monster, and a well, cave, or river, as its dwelling-place, are mixed up with the accessory objects of the main story.

A fertile source of mythical narrations is found in the ancient names of places; legends being invented to account for the names, and then we are gravely informed that the names were derived from the alleged facts of the legends. Near Dundee, in Forfarshire, there is a well called The Nine Maidens’ Well, and adjoining are places named respectively Pittempton, Baldragon, Strathmartin, and Martinstane. From these simple circumstances we have a dragon story, which may be thus abridged. A dragon devoured nine maidens at the well near Pittempton. Martin, the lover of one of the maidens, finding life a burden, determined to kill the reptile, or perish in the attempt. Accordingly, he attacked it with a club, striking the first blow at Strath – pronounced by the country people Strike – martin. The venomous beast was scotched, not killed, by this blow; but as it dragged – Scottice, draiglet – ‘its slow length along’ through a morass, the hero of the adventure followed up the attack, and finally killed the monster at Martinstane. The dragon, like other gr4eat criminals of the olden time, made a ‘last speech, confession, and dying declaration,’ in the following words:

Saint Gilbert was among the Scotch saints restored to the kalendar of the Scotch church in the ill-starred Service Book of King Charles the First.1

1  It would appear that the relics of St. Gilbert were had in reverence till a recent period. On the 23d day of April 1545, in presence of John Earl of Sutherland; of Thomas Murray, Precentor, and Thomas Stewart, treasurer of the Cathedral church of Caithness; of Duncan Chalmer, Chancellor of the Cathedral church of Ross, and Paul Freser, pensioner of the Deanery of that church – ibn the chapter-house of the said Cathedral church of Caithness, appeared John Gray of Kilmaly, and made oath, touching the relics of the blessed Saint Gilbert, that he was altogether innocent of the coming of the servants and accomplices of Donald McKy of Far, within the bounds of the Earldom of Sutherland, and of the slaughter, depredation, and spulzie of goods there by them committed, and that he was not aiding or counselling of them therein. Then, John Matheson, Chancellor of Caithness, and the said John Gray, gave their great oath, touching the relics of the most blessed Saint Gilbert, to be faithful to the said Earl of Sutherland. And thereafter, Murquhard Murray in Pronsi, and Walter Murray in Auchflo, made oath – tactis sacrosanctis beatissimi Gilberti reliquiis – that, in riding with their complices in the month of October last, to the harbour of Unis, they nowise intended the hurt of an honourable man, Hugh Kennedy of Girvane Mains. – Protocol Book of Mr. David Seatton, 1534-1577, among the Records of the City of Aberdeen. For the events, see Sir R. Gordon’s History, p. 111.

Sir Robert Gordon, far more accurate than the common herd of genealogical writers, refers to the WILL of Bishop Gilbert de Moravia as still extant in the Registers of the See of Caithness in his time, or about 1636. If that document chance to have escaped destruction, it would be of singular interest to the law antiquary.

On the 23d April 1623, an act of Privy Council was passed in favour of Samuel Johnston, laird of Elphinstone, in consideration of his having super-expended 20,000 merks on his coal-heughs, ‘to his great hurt and apparent wrack.’ It was stated that he had entertained forty families of men, wives, and children at the work, whose weekly charges exceeded two hundred merks. His coal would be lost and these work-people thrown on the world, if some remedy were not provided, as he could no longer strive with the adverse circumstances in which he was placed. On the other hand, if the work could be held forward and got into proper order, it might be ‘a gangand coal’ for a hundred years to come.

We learn the curious fact that one of the council at that time acted as doorkeeper, and that this duty was imposed, for each diet, on the latest comer: “Attour it is statuit and ordaint that sik of the counsell quha cummis hindmest to the Counsell at tymes requirit, thay being warnit, sall keip the dure quhill [until] the nixt that cummis relief him, and the hindmest of all to keip the dure quhill the counsell ryse for that tyme.”

Nor did the council encourage large deputations in those days. A minute of the middle of the seventeenth century informs us that “Johne Hall being knocking at the Counsall hous doore desyring to have entrie, and it being granted that he sould com in his alon and speak quhat he pleased: because he was not pemittit to com in with ane multitud at his back he refused to com in but protestit at the door.”1

In 1869 the Eagle Pottery was built in Bridgeton for Frederick Grosvenor, an earthenware manufacturer. Pottery manufacture in the East End was more commonplace than we may think today. Besides the Eagle Pottery other local sites include the Wellington Pottery at Wesleyan Street (later the site of Milanda Bakery), Bagnal’s Pottery at Tureen Street and Govancroft at Auchenshuggle. Frederick Grosvenors widow Mary Anne Astle died 13 August 1917. His Daughter, Anne Boden, died 23 April 1919.

One thought on “23rd of April”