THE STRATFORD JUBILEE, OR SHAKSPEARE COMMEMORATION FESTIVAL IN 1769.

On Wednesday, the 6th of September 1769, and two following days, Stratford-upon-Avon, in Warwickshire, witnessed a succession of festivities such as seldom befall in an English country town. The object of these remarkable doings was the commemoration of the great Shakspeare, whose remains, upwards of a hundred and fifty years before, had been deposited in the chancel of the parish church of this his native place… 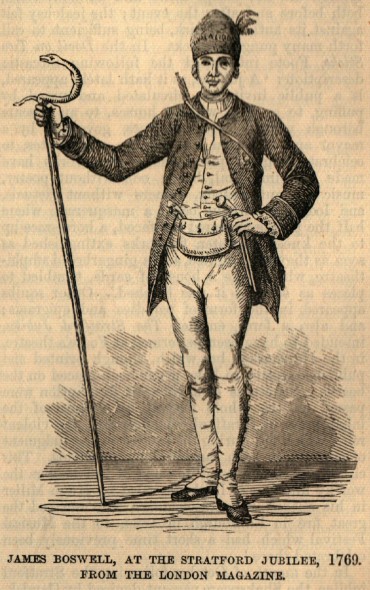 One individual, whose costume attracted special attention, was James Boswell, already referred to, whom the accompanying engraving represents as he appeared at the Stratford jubilee masquerade, in the character of an armed chief of Corsica, an island of which he had published an account, and regarding which he had, as his countrymen in the north would say, ‘a bee in his bonnet.’ The dress consisted of a short, dark-coloured coat of coarse cloth, scarlet waist-coat and breeches, and black spatterdashes, and a cap of black cloth, bearing on its front, embroidered in gold letters, VIVA LA LIBERTA, and on its side a blue feather and cockade. The device was in allusion to the struggles of the Corsicans for national independence under General Paoli, Boswell’s friend. On the breast of the coat was sewed a Moor’s head, the crest of Corsica, surrounded with branches of laurel. Mr Boswell wore also a cartridge-pouch, into which was stuck a stiletto, and on his left side a pistol. A musket was slung across his shoulder, and his hair, which was unpowdered, hung plaited down his neck, ending in a knot of blue ribbons. In his right hand he carried a long vine staff, with a bird curiously carved at the upper end, as ‘emblematical of the sweet bard of Avon.’ He wore no mask, saying that it was not proper for a gallant Corsican. In this character he also delivered a poetical address, sufficiently grandiose and Cambysean, on the united subjects of Corsica and the Stratford jubilee. Therre can be no doubt, as Mr Croker remarks, that poor Bozzy made a sad fool of himself, both on this and other occasions during the jubilee, and would have done well to have followed the advice of his blunt-spoken Mentor, ‘to clear his head of Corsica.’ During his stay at Stratford, he is said to have gone about with the words CORSICA BOSWELL printed in large letters outside his hat, that no one might remain in ignorance of the presence of so illustrious a personage.

As might have been expected, this festive celebration did not escape satire and animadversion, both before and after the event; the jealousy felt against its author, Garrick, being sufficient to call forth many pungent attacks. In the Devil on Two Sticks, Foote introduced the following sarcastic description: ‘A jubilee, as it hath lately appeared, is a public invitation, circulated and urged by puffing, to go post without horses, to an obscure borough without representatives, governed by a mayor and aldermen who are no magistrates, to celebrate a great poet, whose own works have made him immortal, by an ode without poetry, music without melody, dinners without victuals, and lodgings without beds; a masquerade where half the people appeared barefaced, a horse-race up to the knees in water, fireworks extinguished as soon as they were lighted, and a gingerbread amphitheatre, which, like a house of cards, tumbled to pieces as soon as it was finished.’ Other squibs appeared in the form of parodies and epigrams; and also a farce, entitled The Stratford Jubilee, intended to have been performed at Foote’s theatre, in the Haymarket, but which, though printed and published, seems to have never been placed on the boards. Strictures of a different description were passed on the whole festival by certain of the inhabitants of Stratford, who imputed the violent rains which fell during the jubilee to the judgment of Heaven on such impious demonstrations. This circumstance may recall to some of our readers the worthy minister of Leith, recorded by Hugh Miller in his Schools and Schoolmasters, who ascribe the great fire in Edinburgh in 1824, to the Musical Festival which had a short time previously been celebrated there!

Centenary festivities were performed in nearly every part of the world, in honour of Robert Burns, in January 1859. Although the 15th of August was Sir Walter Scott’s real birthday, for various reasons his centenary was celebrated on 9th August 1871, with great enthusiasm in Edinburgh, Glasgow, Dundee, and Dumfries.

John Murray the elder was John Murray’s grandfather. He was the first of his family connected with Selkirkshire.1

1  The name of Archibald de Moravia is mentioned in a charter dated 6th September, 1321, still preserved with the Philiphaugh MSS.

Robert [Reid], Bishop of Orkney, President of the College of Justice, dies at Dieppe, the [6th of September], this year [1558].

On the 6th [September, 1565], after dining, at Glasgow, she rode to Stirling, where she slept; leaving, however, Lennox, as her lieutenant, at Glasgow, with the forces of the west;..

Soon after the separation of the Queen’s army, at Glasgow, on the 6th of September, Morton seems to have retired, from the command, after carrying into effect that important point, of marching the main army into Fife, instead of driving the insurgents, by a rapid pursuit, into England.

The marriage of John Campbell of Cawdor with the sister of the Countess of Argyll had drawn his connexion still closer with his chief’s family, and upon the death of her husband, the Chancellor, Earl of Argyll in 1584, he was one of six persons named to advise the twice widowed Countess in the management of the Earldom during the minority of the young Earl, her son.1 Not content with his share of power, Cawdor planned with Campbell of Lochnell to seize and keep the boy by force, Lochnell to have control of his household, Cawdor of his person,2 and thus to rule the State together.

1  The Earl’s will is notable. Here are some if its terms:-

“Item, becaus the burding wil be havie to my said spous to reull and governethe cuntrie of Argyll and Lorne, etc., induring the tyme of my sonis minoritie, I will and ordane to be adjunit with hir in that behalfe, the intromissioun of geir allanerlie except, thir persounes following conjunctlie; that is to say, Duncane Campbell of Glenurquhy, Dougall Campbell of Auchinbrek, Johne Campbell of Calder, James Campbell of Arkinglass comptrollar, Archibald Campbell of Lochinyell, and Mr. Neill Campbell Bishop of Argyll, quhais counsal my said spous sall follow in all thingis concerning the weill of my sone and his cuntre… Attour, in cace of inlaik of my wyf, I leif the governament of my dochter Annas unto the said John Camppbell of Calder, and to his wyf, hir modir sister… And now, last of all, I leif my son Archibald to be brocht up be his mother and my freindis in the feir of God; and ordanis and willis him and thame that thai never suarf nor schrink bak from the treu religion of Jesus Cryst professit and prechit within this realm, bot that thai, with thair bodeyis and guidis mantene and sett forward the samin to the uttermost of thair poweris in all places, speciallie within the boundis of Argyll and Lorn.” – Latter Will of Colin Earl of Argyll, Chancellor and Justice-General of Scotland, made at Darnaway, 5 and 6 September 1584.

2  Two bonds of agreement were subscribed on the same day, the one ostensible, if need were, the other secret.

This year [1591], there was a new coin ordained by act of counsel and proclamation, 6th of September, of four merk pieces, merk and half merk, of silver, for serving the country.

On the 6th of September 1594, Margaret Hay, a girl of only fourteen years, was forcibly taken from her mother’s house at Shiplaw, Peeblesshire, by Thomas Hay, brother of Hay of Smithfield, John and Thomas Govan, brothers, and ‘Willie Hay callit the Bastard.’ She was rescued by Cockburn of Skirling, who refused to give her up. The end of the matter does not appear. – P. C. R.

“Whereas Numbers of eminent Merchants, Burgesses and Freemen have represented to the Committee of the Royal Brroughs that contrary to many Acts of Parliament, and other Rights and Privileges particularly belonging to them, ascertain’d by the Treaty of Union, sundry Societies and Copartneries are a forming and some actually formed with Large Capital Stocks for carrying on the Fishing and other Branches of Trade in Scotland; Also that certain Freemen Burgesses, under the Title to Trade, pretend to cover and protect Unfreemen in Carrying on the said Branches of Trade, which by many Laws is condemn’d under certain Penalties and Forfeitures, Praying for Redress; Therefore, the said Committee of Royal Burroughs Do hereby certierate, that whoever shall have any Accession to the said unlawful Practices, that they will be prosecute conform to Law.”

On the 6th of September, 1751, the fall of a great stone tenement on the north of the High Street, near the Cross, six storeys in height, with attics, sinking at once from top to bottom, and occasioning some loss of life, caused a general alarm in the city concerning the probable state of many of the more ancient and crumbling houses. A general survey was made, and many were condemned, and ordered to be taken down. But from [the signing of the union with England in] 1707 Edinburgh stood singularly still till 1763, when the citizens seemed to wake from their apathetic lethargy. After that period the erection of adjuncts to the old city (to be referred to in their own localities) led to the general desertion of it by all people of position and wealth. Among the last who lingered there, and retained his mansion in the High Street, was James Fergusson of Pitfour, M.P., whose body was borne thence in October, 1820, for interment in the Greyfriars Churchyard.

Merchant in Glasgow. Bailie in 1779, and Dean of Guild, 1784, 1785. A fine classical scholar and a graceful artist. He designed the seals of several of the Glasgow Incorporations. Son of John Brown (No. 64A). He married, in 1770, Isabella, daughter of John Noble of Ferme and Ardardan Noble, and had issue, James Dennistoun Brown, H.E.I.C.S., grandfather of the lender, and a daughter, Jane, afterwards Mrs. Humphrey Ewing Maclae of Cathkin (see No. 426).

One thought on “6th of September”