In the 9th of September 1513, was fought the battle of Flodden, resulting in the defeat and death of the Scottish king, James IV., the slaughter of nearly thirty of his nobles and chiefs, and the loss of about 10,000 men. It was an overthrow which spread sorrow and dismay through Scotland, and was long remembered as one of the greatest calamities ever sustained by the nation. With all tenderness for romantic impulse and chivalric principle, a modern man, even of the Scottish nation, is forced to admit that the Flodden enterprise of James IV. was an example of gigantic folly, righteously punished. The king of Scots had no just occasion for going to war with England. The war he entered upon he conducted like an imbecile, only going three or four miles into the English territory, and there dallying till the opportunity of striking an effective blow was lost. When the English army, under the Earl of Surrey, came against him, he, from a foolish sentiment of chivalry, or mere vanity, would not allow his troops to take the fair advantages of the ground. So he fought at a disadvantage, and lost all, including his own life. It is pitiable, even at this distance of time, to think of a people having their interests committed to the care of one so ill qualified for the trust; the Many suffering so much through the infatuation of One.

The 9th of September this year [1161] is Gregory, Bishop of Rosemarkie, consecrated by Arnold, Bishop of St. Andrews, the Pope’s Legate in Scotland.

It may be asserted confidently that [the Rood Screen of the Abbey of Lincluden] was erected at the beginning of the sixteenth century, for provost George Hepburn, successor to Andrew Stewart.1 Uncle to the first earl of Bothwell, he was a member of the most powerful family in Scotland. He was chosen abbot of Arbroath in the year 1502, and was made Lord High Treasurer and Bishop of the Isles in 1509. He died on the field of Flodden, 9th September, 1513.2

The defeat at Flodden on the 9th of September, 1513, caused a consternation in Edinburgh unusual even in those days of war and tumult. The wail that went through the streets is still remembered in history, tradition, and in song. Professor Aytoun finely reproduces the feeling of anguish in his well-known ballad of “Edinburgh after Flodden”:-

“Woe, and woe, and lamentation, what a piteous cry was there!

Through the streets the death-word rushes, spreading terror, sweeping on –

Oh, the blackest day for Scotland that she ever knew before!

Oh, our king, the good, the noble, shall we never see him more?

Woe to us, and woe to Scotland! Oh, our sons, our sons and men!

Surely some have ‘scaped the Southron, surely some will come again!’

Till the oak that fell last winter shall uprear its withered stem,

Wives and mothers of Dunedin ye may look in vain for them!”

All the remaining male inhabitants capable of bearing arms were ordered to be in readiness; a standing watch (the origin of the famous old Town Guard) was constituted, and five hundred pounds Scots were even levied for the purchase of artillery.

Against the will of all his nobility, and most of the army, [King James IV.] provokes the Earl of Surrey to battle, and appoints him a day, and sends a Herald to Surrey with a letter, wherein he purges himself from breach of faith in keeping the peace, and accuses his master King Henry. Both armies meet at Flodden hill, the 9th day of September, where the Scots lose the field, and the King is killed, in the 39th year of his age, and 25th complete of his reign, in [the year] 1513.

It is recorded, that, on the night after the disastrous battle of Flodden, which was September 9, 1513, Andrew Ker of Ferniherst, commonly called Dand Ker, an active and powerful adherent of the Lord Home, one of the greatest noblemen in Scotland at that time, broke into the abbey of Kelso, and, having turned the superior out of doors, forcibly kept possession of it. This violence must have been perpetrated in behalf of his brother Thomas, the next abbot. The abbey being at that time held in commendam, might perhaps have been considered as in some measure open to the pretensions of candidates; and the disorders of the government likely to ensue upon the death of the king, who was slain in the battle, might tempt this warlike chieftain to commit an act of usurpation, which, perhaps, he was afterwards able to maintain, although not without difficulty, as it appears, that, in August 1515, the abbot of Kelso, and other friends of Lord Home, were imprisoned at Dunfermline by the Duke of Albany, then regent of Scotland.

The Queen was scarcely born, when calumny began to misrepresent her as a sickly child, who could not live. The Queen mother, who possessed the masculine spirit of her family, ordered the nurse to unswaddle the infant, before Sir Ralph Sadler, the English embassador, who wrote to his impatient master, that the Queen was, as goodly a child, as he had ever seen of her age. The goodly Queen appears to have been baptised in January 1543. And, she was crowned, at Stirling, on Sunday, the 9th of September, in the same year, by Beaton, the Cardinal Archbishop of St. Andrews; the Earl of Arran, as next in blood, bearing the crown.

In September, this same year [1543], the infant Queen is solemnly crowned at Stirling castle; all these that favoured England were present at the coronation; but [Matthew Stewart] the Earl of Lennox departed the town, and would not be present, neither yet any that had breathed the French air.

On the 9th [September, 1565, Queen Mary] dined, at Lochleven, and slept at Falkland.

In that year [1648] Glasgow was divided ecclesiastically into four parishes, and in 1701 it was divided into six. In making this division the Magistrates and the General Session – for it was done at the sight of both – appear to have had regard solely to the number of “examinable persons” which would be in each division. The total number of such persons to be provided for was 9994, and how very equally the city was apportioned for their accommodation will be seen from the division made. There was first “the north quarter,” comprehending the Drygate and Rottenrow “and country places,” and coming down to the Blackfriars’ Church, “containing of examinable persons” 1777. Second, the middle quarter, down the High Street to the Cross, containing 1685. Third, the east quarter, comprehending the Gallowgate and east side of Saltmarket, containing 1628. Fourth, the south quarter, comprehending the Bridgegate and Goosedubs, containing 1648. Fifth, the south-west quarter, now the Tron parish, containing 1649; and lastly, the north-west quarter, beginning at the Tolbooth and “taking in all without the west port and the west side of Stockwell, and comprehending the Candle Street and Bells Wynd with the Grammar School Wynd and the Back Wynd,” containing 1607.1 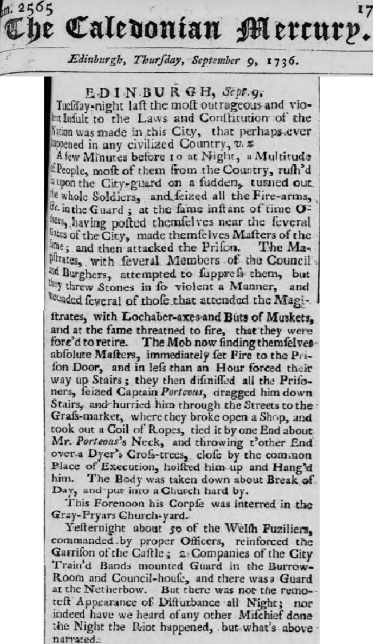 According to the Caledonian Mercury of 9th September, 1736, the body of Porteous was interred on the second day in the Greyfriars. The Government was exasperated, and resolved to inflict summary vengeance on the city. Alexander Wilson, the Lord Provost, was arrested, but admitted to bail after three weeks’ incarceration. A Bill was introduced into Parliament materially affecting the city, but the clauses for the further imprisonment of the innocent Provost, abolishing the City Guard, and dismantling the gates, were left out when amended by the Commons, and in place of these a small fine of £2,000 in favour of Captain Porteous’ widow was imposed upon Edinburgh. Thus terminated this extraordinary conspiracy, which to this day remains a mystery. Large rewards were offered in vain for the ringleaders, many of whom had been disguised as females. One of them is said to have been the Earl of Haddington, clad in his cook-maid’s dress. The Act of Parliament enjoined the proclamation for the discovery of the rioters should be read from the parish pulpits on Sunday, but many clergymen refused to do so, and there was no power to compel them; and the people remembered with much bitterness that a certain Captain Lind, of the Town Guard, who had given evidence in Edinburgh tending to incriminate the magistrates, was rewarded by a commission in Lord Tyrawley’s South British Fusiliers, now 7th Foot.

Towards the end of the preceding month the more zealous citizens had proposed to raise a regiment 1,000 strong for the defence of the town; but the royal permission therefor was not accorded till the 9th of September [1745], and by the time that the Prince drew near only 200 men had been enrolled, all of the most dissolute character, and tempted by the proffered pay alone. In addition to these was the regiment of Edinburgh Volunteers, 400 strong, divided into six companies, and drilled regularly twice daily. Cannon from the ships at Leith were mounted on the walls together with swivels of pateraroes (i.e., small cannon). The ports were barricaded; there was much military bluster, with much singing of psalms; but as the Highlanders drew nearer all this show of valour died away.

When the Prince’s vanguard was at Kirkliston, it was proposed by General Guest that the two Light Dragoon regiments, supported by the City Guard, the so-called Edinburgh Regiment, and 250 volunteers, should march out and give battle to the insurgents!

One thought on “9th of September – Battle of Flodden”